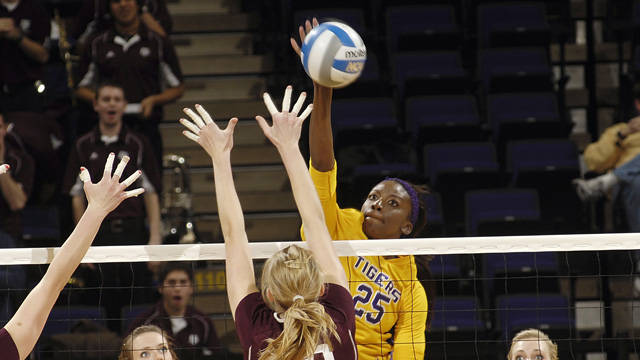 LSU concludes its season 25-7 as Cooper, Dabbs, Lauren DeGirolamo and Marina Skender finish their careers in the purple and gold. The Tigers have racked up an impressive 115-38 mark over the last season en route to five consecutive SEC Western Division championships and earned their first overall SEC championship since 1991.

“I thought our kids played their hearts out tonight, and we just got beat. Credit Texas A&M because they played with great heart too,” head coach Fran Flory said. “We knew neither team was going to leave anything out on the court. The team that made the most big plays was going to be the team that would succeed at the end. Unfortunately for us, their outside [hitters] did a tremendous job, and their coaching staff did a great job of adjusting.”

The deciding frame started with the two teams splitting the first 18 points. Neither team could extend its lead past a point during the first half of the frame. At 9-9, the Aggies used a Jennifer Banse kill and back-to-back spikes from Mary Batis on pair of long rallies to creep ahead 12-9.

After a Cooper spike cut the margin down to 12-10, Banse added a critical sideout and Dylan Faulkner slapped a pair of aces for the final margin of 15-10. The Aggies (20-10) advance to the Sweet 16 where it will meet archrival No. 2 Texas next weekend in Omaha.

“We got a little safe on certain plays and didn’t really attack,” Flory said. “I thought we had the right situation at the end of the match, but credit them because they made some huge touches.”

Cooper’s .700 hitting clip was a LSU postseason record as the SEC Player of the Year also tacked on nine blocks. The Houston, Texas product finished the season with a .409 hitting ratio to set a program single-season mark. Dabbs picked up 11 digs for her 12th double-double of the season.

“If Cooper isn’t a First-Team All-American, then I don’t know what that looks like,” Flory said. “That was an amazing performance. Statistically, she did everything she could to win this match.”

LSU came out firing on all cylinders as the Tigers connected for a blistering .517 hitting percentage in the opening frame. Ahead 15-14, LSU used a strong finishing kick en route to 10 of the final 14 points for a 25-18 victory. Skender and Cooper powered home five kills apiece as Dabbs passed out 15 helpers. The Tigers also converted on 77 percent of their sideout attempts.

The next three sets would go the distance and be decided by the minimum of two points.  Set two featured 17 ties and eight lead changes, both match-highs, as neither team could build an advantage bigger than two points throughout the entire frame.

At 21-21, Sarah Ammerman belted back-to-back kills to give the Aggies a two-point edge. After a LSU timeout, the Tigers charged back behind A&M service and hitting error coupled with Williams-Skender block to go up 24-23. The Aggies used Ammerman’s ninth spike of the frame along with consecutive hitting miscues by Williams and DeGirolamo to escape with the 26-24 win.

Cooper provided the late set heroics for LSU in the third frame. Down 22-21, she soared for a kill and a block to turn the tables in favor of the Tigers, 23-22. Banse evened the score before Cooper and Skender struck for consecutive kills as LSU emerged with the 25-23 triumph. Bensend joined Cooper and Skender with four kills apiece in the set.

Set four was another tight affair as LSU took a 21-20 edge on a Cooper kill before the Aggies fired back with consecutive spikes by Banse and Batis. Skender pulled the Tigers even at 22, but back-to-back spikes from Batis and Ammerman made it 24-22 in favor of Texas A&M.

After a LSU timeout, Skender trimmed the A&M advantage to 24-23 before a block on Williams in transition gave the Aggies a 25-23 win. Cooper posted eight kills on 10 swings in the frame.

“Losing never feels good, but we set a lot of records this year,” Dabbs said. “We beat Florida [twice] and won the SEC. We’re going out with a bang. We didn’t get as far as we wanted in the [NCAA] tournament, but the senior class set the platform for years to come.”

Ammerman countered with 26 kills on a .396 hitting percentage and Banse cranked 20 spikes on a .348 clip for the Aggies. Kristen Schevikhoven and Jola Kelner combined to distribute 62 assists, while Batis notched 12 kills and tallied 16 digs. Tori Mellinger also corralled 18 digs.

“This wasn’t the ending we hoped for, but we had a lot of proud moments,” Flory said. “Our kids played as hard as they could, and I walked out of this building very proudly tonight.”

Opening statement
“I thought our kids played their hearts out tonight, and we just got beat. That was the talk we had in the locker room. Credit Texas A&M because they played with great heart too. We knew before the match that neither team was going to leave anything out on the court. They were going to play through every difficult situation, and the team that made the most big plays at the end was going to be the team that would succeed. Unfortunately for us, their outside [hitters] did a tremendous job, and their coaching staff did a great job of adjusting. Credit them. Not the ending we hoped for, but we had a lot of proud moments. Our kids played as hard as they could, and I walk out of this building very proudly tonight.”

On Cooper’s performance …
“If Cooper isn’t a first-team All-American, then I don’t know what that looks like. That was an amazing performance. If you have 28 kills as a middle [blocker] on 40 swings with zero errors, hitting at .700, that just doesn’t happen. Statistically, she did everything she possibly could have her do to win this match. The rest of our team played with that amount of heart and desire as well.”

On the Fifth Set …
“We got a little safe on certain plays. We didn’t really attack. I thought when they were able to defend Cooper at all, and it started in the fourth set, it took the air out of us a little bit. I thought we had the right situation at the end of the match, but credit them because they made some huge touches.”

On Meghan Mannari Seeing Extended Action …
“We as a staff thought Sam [Delahoussaye] was playing a little bit tight. She was getting frustrated and playing tighter and tighter. The pace of play was pretty fast, and A&M blasts the ball. They come at you, and that pace, Sam wasn’t adjusting to. In our practices, Meghan for the past two weeks had been playing tremendous. We thought we would give her a try, and we thought she would make some big plays. She doesn’t have the serving efficiency that Sam does.

Setter Sam Dabbs
On the Match…
“Losing never feels good, but we set a lot of records this year,” Dabbs said. “We beat Florida [twice] and won the SEC. We’re going out with a bang. We didn’t get as far as we wanted in the [NCAA] tournament, but the senior class set the platform for years to come. Today was a battle, and we knew it was going to be. At the end, they just made the plays. We got tight and tense, and it slipped away.

Middle Blocker Brittnee Cooper
On Her Performance…
“They started stacking in on me. Any time it was a perfect pass, I had like three blockers on me. Sam kept giving me good sets.”

Opening statement…
“Well, we’re really excited. We haven’t had a lot of success in our five-set matches previous to tonight. I think that played a large role in our determination and our ability to stay composed. We executed when we needed to execute. I’m just incredibly proud of this group and the way they handled themselves throughout the night. We’re one step closer to achieving our goal.”

On several players getting food poisoning last night…
“Yeah, we had an emergency room-looking locker room with five IVs going about two hours before the match. We had some food poisoning in our dinner last night, so it’s been an all-nighter for most of the team.”

On the condition of the players who got sick…
“Very weak. Two of them couldn’t play at all. A couple of them that did play were down for the count just a few hours ago and said, ?Well, I’m just going to give it my best effort.’ Half of them that got sick played, and half of them didn’t.”

On what having Sarah Ammerman on the court enables them to do differently…
“I don’t know that it’s so much what we’re able to do [that changes]. Sarah’s a team captain, she’s got four years of starting experience under her belt, and she’s a court leader. So, I think more than anything, it was missing her leadership out on the court last night. To be able to pull that one out was really a huge boost for our team. Sarah was incredibly instrumental in that win as well, just being super supportive of the team in practice and everything else, just being a great teammate. I think that’s really where we missed her the most.”

On SEC Offensive Player of the Year Brittnee Cooper’s performance tonight…
“She’s ridiculous. No errors ? that’s unbelievable. She’s incredible. I just said to the team, ?I don’t think we’ve faced any player that’s been that difficult to stop or slow down or so dominant in any team in the Big 12.’ There is not a player that dominant. Maybe Destinee Hooker [of Texas], yes, but she’s on the outside, and there’s more time for her to get ready. There’s no time for Cooper. It’s really incredible, and if she chooses to have a great future in volleyball, I think it’s there for her if she wants it. She could help our national team.”

On Baton Rouge as an NCAA host site…
“It was a great experience. I was thinking about it earlier in the day. It’s been really smooth. The hotel has been great. The hardest part has been the traffic from here back to the hotel and sitting on the bus for 30 to 45 minutes. But overall, everyone’s been friendly. It’s been great. We’ve really enjoyed it a lot. It’s a great venue for volleyball.”

On facing Texas for the third time this season…
“It’s hard to win three times in a row against a team, and we don’t have to do any scouting. We know them very well, back and forth. They’re definitely a really strong team. We did give away a lot of points last time we played them. We kind of beat ourselves in many of the rallies, not to take anything away from Texas. We’re happy to always get a shot at the best. When we play great teams, it brings out the best in us. That’s what I’m looking forward to.”

On facing longtime friend and LSU setter Sam Dabbs …
“That’s always fun. I’ve played with her since I was 12, I think. I know her tendencies, I know what makes her work, and it’s fun. It’s a good rivalry. Win or lose, she’s going to be a bridesmaid in my wedding. We’ll always be best friends.”

On not wanting her career to end with a loss tonight…
“I love this group of girls absolutely more than anything, and if I can spend one more day with them, you better believe I’m going to do everything in my power to make that happen.”