No. 15 Volleyball Focused on Tulane for NCAA Opener 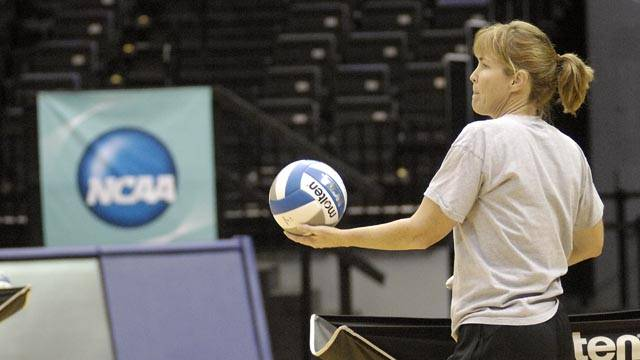 BATON ROUGE ? The No. 15 seeded LSU volleyball team embarks on its fifth straight NCAA Tournament appearance and opens the NCAA Baton Rouge Regional Friday against Tulane. First serve is slated for 7:30 p.m. at the Maravich Center. Fans can listen to all the action via a free live webcast with Matt Dunaway and Kent Lowe on LSUsports.net

The two teams have already met twice on the hardwood during the regular season with each team holding serve on its home court. LSU notched a 3-0 win on Sept. 5 at the Maravich Center, while the Green Wave emerged with a 3-1 victory six days later in New Orleans.

“At this point in the season, we are who we are,” head coach Fran Flory said. “We’re just trying to fine tune a few things and make sure we’re familiar with the game plan. Having played Tulane twice this season, we’re fairly familiar. You just want to get comfortable, make sure you are ready and stay focused.”

LSU is led by a trio of All-SEC First-Team performers in Brittnee Cooper, Sam Dabbs and Marina Skender.

Cooper became the first Tiger to earn SEC Player of the Year earlier this week. She paces the SEC with a .390 hitting percentage and 1.32 blocks per set. The Houston, Texas product knocked double-digit kills on 21 occasions and notched over a .400 hitting clip 17 times in 2009.

Dabbs has distributed 1,067 assists at a 11.23 per set ratio, good enough for second in the SEC. She set the Tigers to over a .300 hitting percentage during 13 matches and recorded 10 double-doubles. The San Antonio, Texas native also eclipsed 40 or more assists in 12 outings.

Skender cranked double-digit kills in 26 matches, including 23 of her last 25 outings after missing the entire 2008 season due to injury. She has racked up a team-best 13 double-doubles. Skender’s 3.50 kills and 0.27 aces per set are fifth and sixth in the SEC rankings, respectively.

Lauren DeGirolamo also has added a strong senior campaign for the Tigers. She has tallied 49 blocks over her 12 matches and her 1.07 per set average in SEC matches was ninth. DeGirolamo has popped 57 of her 136 kills during her last 10 matches.

“Our senior class is such a great class and the fun part for us is we can really be a balanced team,” Flory said. “The seniors are certainly leading the way and they have kind of been the heart and soul of the team. At the same time, we couldn’t have done it without everybody else. I think everybody understands that, and this is a true team right now. Those are the teams that continue to play in the month of December.”

Michele Williams has provided 114 blocks and her 1.14 per set mark ranks sixth in the SEC, while LSU has won 14 of its 15 matches over the last three seasons when Angela Bensend has knocked double-digit kills.

LSU’s back row is headlined by Lauren Waclawczyk and Sam Delahoussaye. The duo has amassed 33 double-digit dig efforts in 2009. Waclawczyk’s 3.73 digs per set are 10th in the SEC and she has chipped in an ace in each of her last five outings.

“The kids came in this week throughout the entire week of practice and did a great job,” Flory said. “They were extremely focused and intent on fixing a few things [after the Rice match]. We wanted to work on being better technically, and hopefully we will execute at a high level Friday night.”

Tulane is led by Visnja Djurdjevic, the C-USA Co-Player of the Year, who has compiled 4.25 kills and 3.30 digs per set. She also headlines C-USA with 0.43 aces per frame. Rachel Lindelow has handed out 10.93 assists per set, while Ksenija Vlaskovic has powered home 3.29 kills per frame. Both earned a spot on the All-Conference USA Second Team. Jenn Miller reels in 3.92 digs per set for the Green Wave.

Live stats for Friday’s match are available in the Geaux Zone on LSUsports.net. Fans also can follow in-match updates of the 2009 SEC champions via www.twitter.com/lsuvolleyball.

Tickets can be purchased online at www.LSUtix.net as well as in person at the LSU Athletics Ticket Office or by phone at 225-578-2184 or 800-960-TKTS. The ticket office is open Monday-Friday from 8 a.m. until 5 p.m. on the first floor of the Athletics/Administration Building.

Tulane concluded its practice at 5:40 p.m. and head coach Sinisa Momic joined LSUsports.net for a post practice interview. Read the transcript below.

Arizona hits the court to wrap up Thursday’s practice sessions.

On the matchup with LSU in the first round …
“LSU is a team that we know well. We have played them twice already this year. Our first week here at LSU for the tournament we lost in three, and then we won at home in four. We think we know them well enough, but it’s just how we execute tomorrow. How we execute both our game plan and our level of play. They’re definitely a high-level opponent ranked in the Top 15. We know we have our work cut out for us, but this year I think we did a great job making the tournament. We’re just going to go after it and see what happens.”

On their tough pre-season schedule helping them get into the tournament …
“With everything we had to deal with in the spring with the coaching change, recruiting a couple players at the last moment, and a couple players came in late and out of shape. Then, we had to deal with the [swine] flu. It actually helped us out a lot to play that tough of a schedule, and we came up with a couple of very important wins with New Mexico and LSU. We stayed in the top two or three in our conference and had the highest RPI in conference. In the end, that got us into the tournament.”

On the experience of being in the NCAA tournament two years in a row …
“This happened for the second time in Tulane history. We’re definitely counting on everyone that was here last year to handle the pressure in a situation like this. It’s especially good for the future because we’re going after it every year so we can rely on some people that were in this situation before. Overall, it’s a great experience for the whole program and for this team.”

LSU finished its practice at 4:05 p.m. and head coach Fran Flory joined LSUsports.net for a post practice interview. Read the transcript below.

On today’s practice and the final preparations for Tulane …
“At this point in the season we are who we are. We’re just trying to fine tune a few things, make sure we are familiar with the game plan. Having played Tulane twice this season, we are fairly familiar. They have a couple changes since we played them. We want to make sure we are prepared for that just as everybody is. You just want to get comfortable, make sure you are ready and stay focused.”

On if it comes down to execution late in the set and the serve-pass battle against Tulane …
“I think we have to get pressure on them. It’s the same story, just another opponent across the net. We are focusing on being efficient, being physical and controlling our side of the net. I think most people in the NCAA Tournament are going to have the same story.”

On the seniors carrying the team so far this season …
“The senior class is such a great class. The fun part for us is we can really be a balanced team, and in very key matches throughout the season we have been very balanced. We do rely on the seniors and they have done a tremendous job, but Willie [Michele Williams] does a great job; Benny [Angela Bensend] does a great job; Lauren [Waclawczyk] has done a great job as our libero. Everybody with our team is contributing at the top level. [Brittney] Johnson comes off the bench. The seniors are certainly leading the way and they have kind of been the heart and soul of the team. At the same time, we couldn’t have done it without everybody else. I think everybody understands that, and this is a true team right now. Those are the teams that continue to play in the month of December.”

On working to improve blocking and passing after the loss at Rice …
“We hit a road bump, if you will, and that’s ok. Sometimes those matches refocus you and let you know that you are vulnerable. I think it was a good wake-up call. The kids came in this week throughout the entire week of practice and did a great job. They were very focused and intent on fixing a few things. We wanted to work on being better technically, and hopefully we will execute at a high level Friday night.”

Texas A&M wrapped up practice at 2:30 p.m. and head coach Laurie Corbelli joined LSUsports.net for a post practice interview. Read the transcript below.

On Texas A&M practice heading into the Arizona match tomorrow…
“Obviously, we’re trying to work on the scouting report, but mostly it’s going to come down to how well we execute and how relaxed we are. We have to have some fun. We’re going to make this a memorable weekend for us. It was a really good practice, and I can sense the excitement in the girls.”

On Texas A&M making its first NCAA Tournament appearance since 2005…
“The freshmen class that came in 2006 is now my senior class. I think the biggest challenge for us will be to reel them a little bit and not be too excited. Our players are experienced. So many of our seniors have been starters for so long. I think being in the Big 12 has prepared us for lots of things. I can’t imagine that there will be many surprises. There will be nerves because they want to do so well. I think other than that they’ll be pretty calm.”

On Texas A&M’s keys to victory tomorrow…
“I think the serving and passing game is really important for us. We really need to put a nice game together on the serving/receiving end and make sure we’re smart with our serving. I think everything else will typically fall into place for us. We’re going to be focused on those.”

Arizona finished its practice at 8 p.m. and head coach Dave Rubio joined LSUsports.net for a post practice interview. Read the transcript below.

On tonight’s practice session…
“Well, it’s nice to get in the facility we’re going to compete in tomorrow. We’re just trying to get acclimated to these new surroundings. I think the more time you can spend on the actual competition floor, the more familiar your team’s going to be, so it was nice to be able to do that tonight.”

On returning to the NCAA Tournament for the first time since 2005…
“Well, I don’t know how the players are going to respond to that. My hope is that we respond well, but it’s nice to get back. We had a little bit of a dry spell. I’m really disappointed last year that we weren’t selected, but again it’s nice to be back. The hope is, for all 64 teams, that we’re going to play well.”

On what Arizona needs to do well to succeed…
“Well, I think it’s all about serving and passing. It’s not that complicated for most teams, and for us it certainly isn’t. I think if we do that, we’ll put ourselves in position at least to have a good match. But if we don’t do that well, we’ve also seen that we don’t play very well when we don’t do those particular skills consistently. Hopefully we’re going to be OK there.”