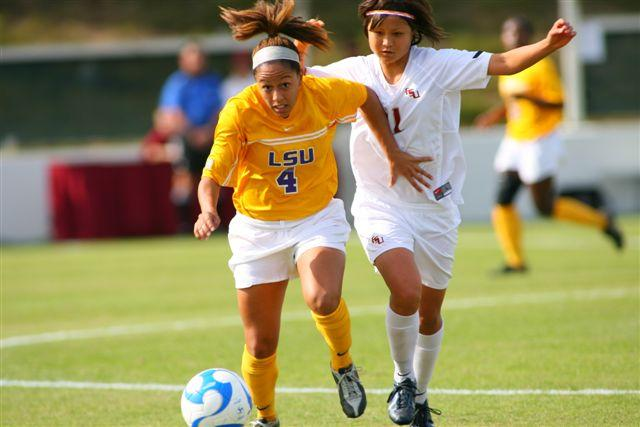 TALLAHASSEE, Fla. — The LSU soccer team saw its season come to an end Sunday afternoon in the second round of the NCAA Tournament as it fell to the 14th-ranked Florida State Seminoles by the score of 4-0 at The Seminole Soccer Complex.

For the Tigers (12-5-7), it was their school record seventh match this season against a nationally-ranked opponent as they dropped to 1-2-1 all-time against the Seminoles (15-5-3).

“Florida State is a great team and one of the premier programs in women’s college soccer,” said LSU head coach Brian Lee. “They just wore us down today with good play. They do a great job of passing and possessing the ball in the attack, and we had to chase them throughout the match.

“They’re an excellent team that plays an attractive style of soccer. They showed today why they are one of the more challenging teams in the country to stop when they’re on the attack.”

LSU had an opportunity to take an early lead in the 16th minute when sophomore Malorie Rutledge played a ball over the Florida State defensive back line from near the midfield stripe to junior Roslyn Jones, who fired a shot into the outstretched hands of Seminole goalkeeper Erin McNulty with a defender draped on her back.

But the Seminoles, who entered the match as the second best scoring team in the nation, flexed their offensive muscle over the last 75 minutes of the match after taking a 1-0 lead into the break.

After FSU midfielder Amanda DaCosta had a goal wiped off the board in the 18th minute of play due to an offside call, teammate Holly Peltzer netted the first goal of the match at the 20:24 mark on a shot from 12 yards out following a centering pass from Marissa Kazbour.

All-American forward Mami Yamaguchi just missed pushing the Florida State advantage to 2-0 in the 28th minute as she ripped a header off the crossbar. The Seminoles outshot the Tigers in the first half by a 17-5 margin with a 6-1 edge in shots on goal and a 9-0 advantage in corner kicks.

Florida State’s Kirsten van de Ven put the game out of reach with a pair of goals less than seven minutes apart in the second half, scoring her first of the match at the 66:43 mark followed by her second goal at the 73:27 mark. After van de Ven had extended the FSU lead to 3-0, Yamaguchi provided the final margin with her team-leading 22nd goal of the season at the 74:36 mark.

The Tigers struggled to find any consistency on the offensive end as they attempted just 10 shots with one shot on goal and two corner kicks in the match. The Seminoles countered with 30 shots, 10 shots on goal and 12 corner kicks of their own.

“I was fortunate to get a few shots, but it was hard for us to break through with a goal,” said Jones, who finished with a team-leading three shots on the afternoon. “They’re obviously a great team. It was especially difficult when we started chasing the game after they got a second goal.”

Despite the loss to Florida State, LSU enjoyed its most successful season in the 13-year history of the program. The Tigers were crowned SEC Western Division champions for the first time, while they also advanced to the NCAA Tournament for the first time and earned their first postseason win with a 1-0 shutout of Samford in the first round on Friday.

Lee said that he is proud of what his team was able to accomplish in 2007 and that he and the rest of the Tigers are looking forward to achieving great success again next year.

“We’re excited about the future of LSU soccer,” Lee said. “Today was a great learning experience for our young team, and we’ll work to get back next year and see if we can be a Sweet 16 team or better. This year was just about right for us. We’re anywhere from the 17th to the 32nd best team in the country, and we’ll work hard over the next 10 months to take the next step.”