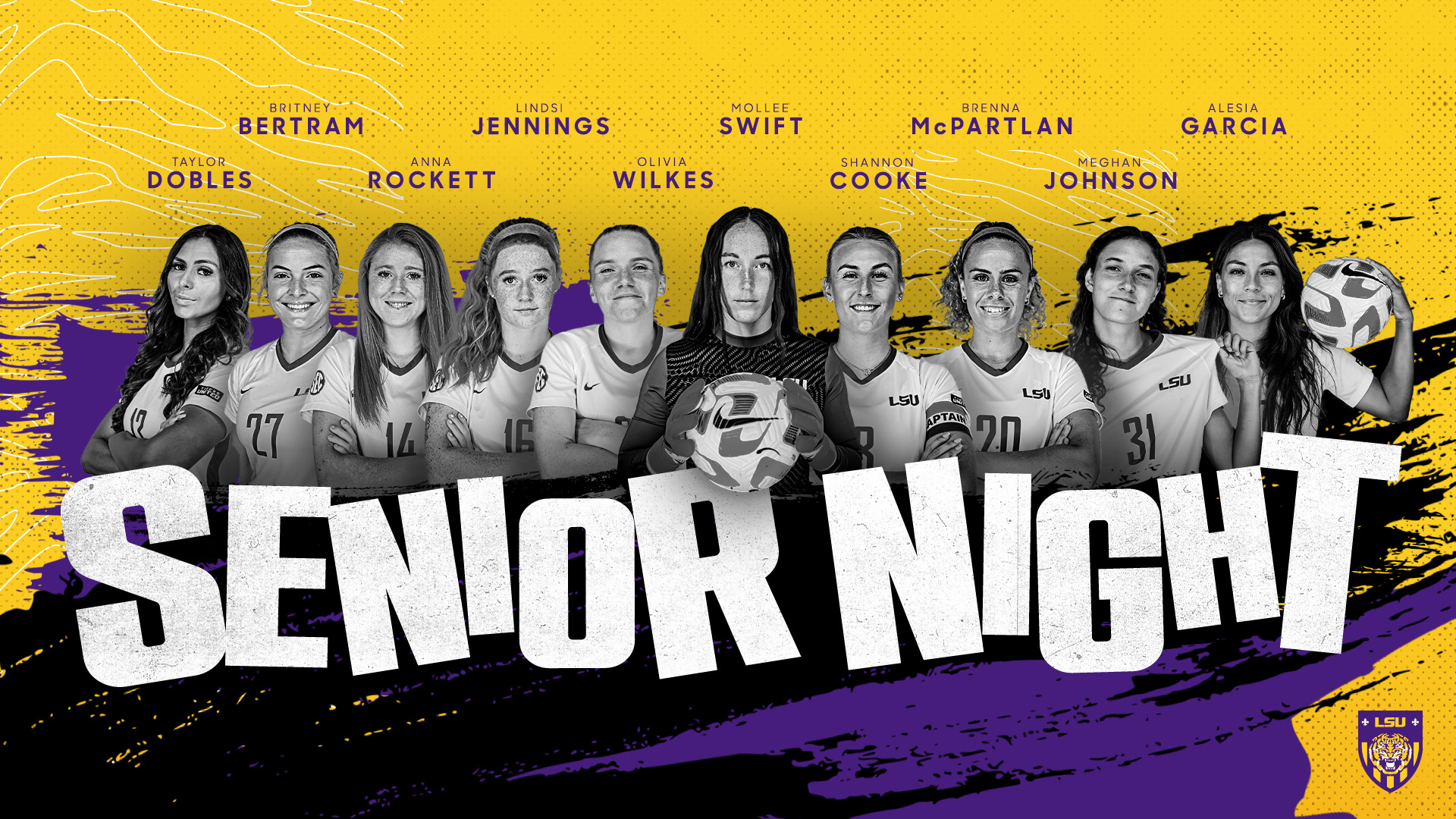 LSU will recognize 10 seniors during pregame at Thursday’s match and honor the players for all of their accomplishments throughout their career.

Shannon Cooke, a native of Rickmansworth, England, is a 5th year member of the LSU Soccer Program. Cooke has been a vital piece in the defense during career, starting in 83 matches and over 7,000 minutes played on the pitch. She has recorded eight goals, four assists, and 20 points. Cooke was a part of the 2018 squad that won the SEC Championship, where she scored the first goal of her LSU career in the SEC semifinals against Tennessee and again in the title match against Arkansas to level the match up at one in the 72nd minute.

Brenna McPartlan, a native of Blackburn, England, has spent two years in the Purple and Gold and has seen action in 23 games. She recorded her first career goal as a Tiger this season against Southern Miss and has two assists on the year. Prior to LSU, McPartlan spent three seasons at South Alabama, where she started in 65 matches and tallied 20 goals and 15 assists.

Olivia Wilkes, a native of Preston, England, has spent the last two seasons with the Tigers and appeared in 20 matches. Prior to LSU, Wilkes spent three seasons at the University of South Alabama, where she played in 61 matches and had five goals and 11 assists. She recorded her first goal in the Purple and Gold this season against Southern Miss and found her second goal of the year at Mississippi State.

Meghan Johnson, a native of Baton Rouge, Louisiana, is a 5th year member of the LSU soccer program. As one of our veteran players, Meghan has racked up 5 career goals and 3 career assists. Johnson is one of two who was a part of the 2018 SEC Championship team. Johnson scored the game-winning penalty kick against Tennessee to send the squad to the semifinals that year.

Anna Rockett, a native of Cary, North Carolina, is a 4-year member of LSU’s soccer program. Anna has made a plethora of appearances in her career totaling 45 games played for LSU.

Taylor Dobles, a native of Pembroke Pines, Florida, is in her fourth year with the LSU Soccer program. She is a two-time SEC Academic Honoree and was voted as the 2021 Freshman of the Year by the Louisiana Sports-Writer Association. Dobles has played in all 17 games so far this year, including a career-high two goal game vs Stephen F. Austin in August.

Britney Bertram, native of Slidell, Louisiana, is in her second year with the LSU Soccer program. Prior to her time in Baton Rouge, Bertram spent her first two years of college at Stetson University, where she recorded one goal and two assists in 21 games played. She has appeared in 7 games for the Tigers this season.

Alesia Garcia, a native of Aurora, Colorado, Alesia Garcia is a two-year member of the LSU soccer program. After three successful seasons at the University of New Mexico, Garcia joined the Tigers in the fall of 2021 and has gone on to make 37 appearances and 25 starts for the Tigers while scoring 11 goals and getting five assists. In her collegiate career, she has scored 30 total goals and assisted 13 in 91 total games.

Lindsi Jennings, a native of Conroe, Texas, is a two-year member of the LSU soccer program. She spent three years at the University of Northern Colorado before joining the Tigers in the fall of 2021. In that time, she’s made 37 appearances for the Tigers and started 28 of those matches in defense. Jennings was named a captain ahead of the 2022 season and has led the Tigers alongside co-captain and fellow super senior Shannon Cooke. Jennings has scored three goals for the Tigers, including a late game-winning goal this season against Missouri.

Mollee Swift, a native of Papillion, Nebraska, is a three-year member of the LSU soccer program. Swift spent her freshman year at the University of Colorado at Colorado Springs before enrolling at LSU in the fall of 2020. In her time as a Tiger, she has served as the starting goalkeeper for LSU for three years, making 52 appearances and starts while picking up 221 saves and earning 23 wins between the posts. Her 221 career saves currently place her tied for 4th all-time in program history while her 1.21 Goals Against Average also places her 4th all-time in program history.