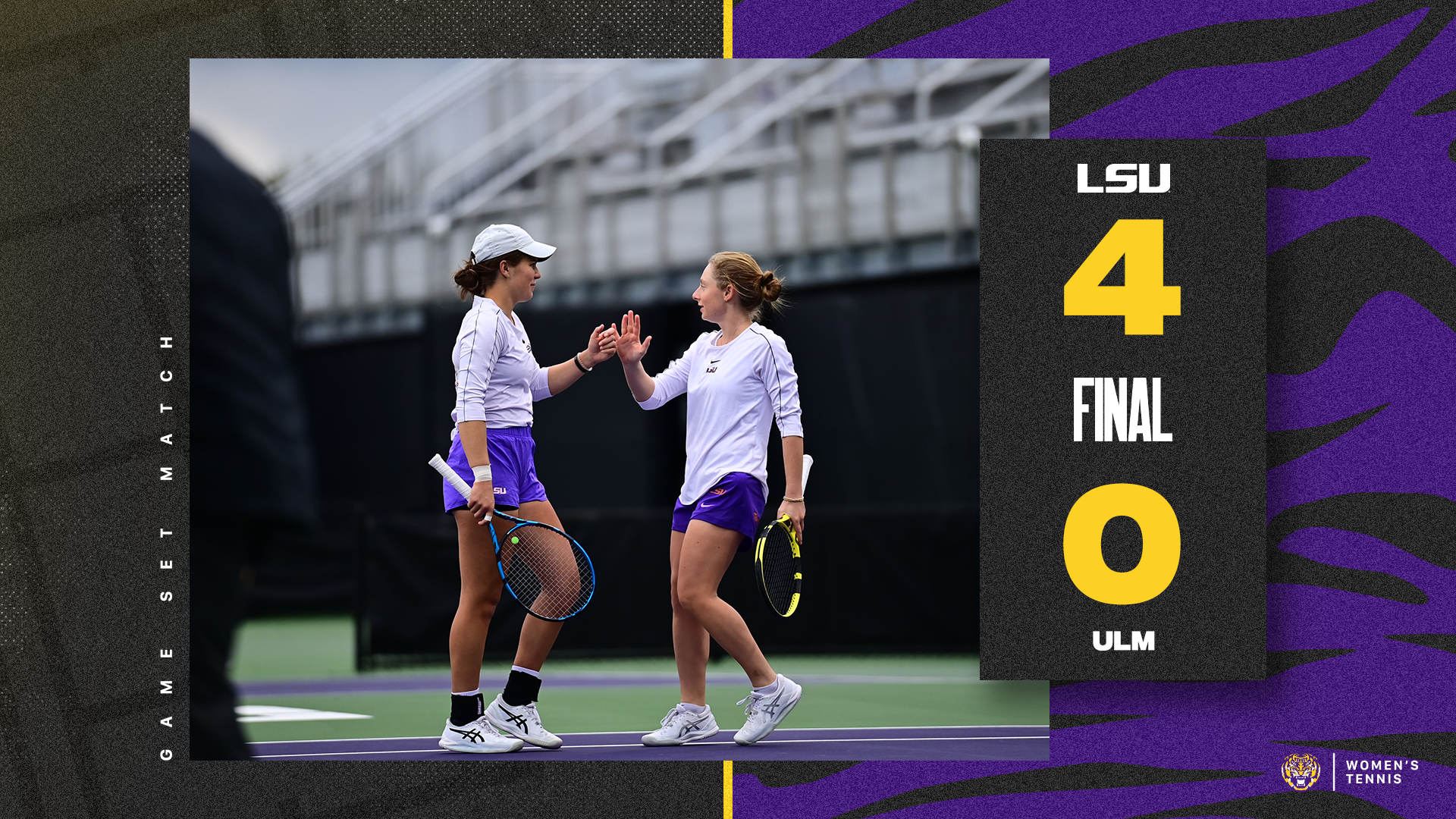 Taylor’s Thoughts
“You go through all the hard work with the team throughout the year, so getting two strong wins today was awesome for them,” head coach Taylor Fogleman said. “The team did great, especially with three players playing in their first dual matches of their career (Noor Carrington, Anastasiya Komar and Nikita Vishwase). It doesn’t matter whether you were the top junior tennis player in the world, dual matches are different beasts than individual tournaments. I thought our whole team, from our freshmen to our experienced graduate student Mia (Rabinowitz), played well today.”

Doubles Results – Match 1
The first match of the day began with doubles starting at 10 a.m. CT. The experienced pairing of graduate student Mia Rabinowitz and senior Nina Geissler opened the round of doubles with a strong 6-2 win over Mackenzie King and Angela del Campo at the No. 3 doubles spot.

The doubles point was clinched only moments later as the No. 7-ranked duo of Anastasiya Komar and Nikita Vishwase earned a 6-2 win over Alice Klinteby and Alessandra Anghel at the No. 1 doubles spot.

Singles Results – Match 1
Rabinowitz picked up right where she left off from doubles play as she gave LSU a 2-0 lead with a win at the No. 6 singles spot. Rabinowitz played a perfect match against King as she blanked the Warhawk 6-0, 6-0 to earn her first singles win of the dual season.

The lead was extended to 3-0 after senior Safiya Carrington earned a straight set win over Oleksandra Balaba. Carrington dropped only one game in the first set as she won 6-1 before repeating the score in the second.

The 4-0 win was clinched at the No. 5 spot as freshman Nikita Vishwase marked her dual season debut with a straight set win over Tamara Bachmann. Vishwase blanked her opponent, 6-0, in set one before only dropping one game in the second set to win 6-1 and secure the first victory of the year.

Doubles Results – Match 2
Following a two-and-a-half-hour break, the second match began at 2 p.m. CT. Safiya Carrington and fellow senior Maggie Cubitt got the match off to a fantastic start as they blanked Klinteby and Bachmann at the No. 2 spot, 6-0, to give LSU the early advantage.

The No. 7-ranked pair of Komar and Vishwase once again clinched the doubles point, this time taking down the pairing of Anghel and Balaba by a dominant 6-1 scoreline.

Singles Results – Match 2
Rabinowitz picked up her second singles win of the day and LSU’s first of the second match as she took down King at the No. 5 singles court. Rabinowitz dropped only one game in the first set, 6-1, before blanking her opponent in the second with a 6-0 win to clinch the straight set victory and give the Tigers a 2-0 lead in the match.

Safiya Carrington picked up her second singles win of the day as well as she earned a straight set win over Anghel. Carrington took an early lead in the first set and went to win it by a score of 6-2. The senior repeated the scoreline in the second set as she clinched her court and extended LSU’s lead to 3-0.

The second sweep was clinched at the No. 1 spot, where No. 32-ranked Komar defeated doubles-foe Balaba. Komar opened the match with a 6-2 win in the first set before holding off a charge from Balaba in the second set as she won 6-3 and completed the second sweep of the day.

Up Next
The Tigers return to the LSU Tennis Complex when they host Ivy League opposition Harvard at 2 p.m. CT on Friday, January 27.