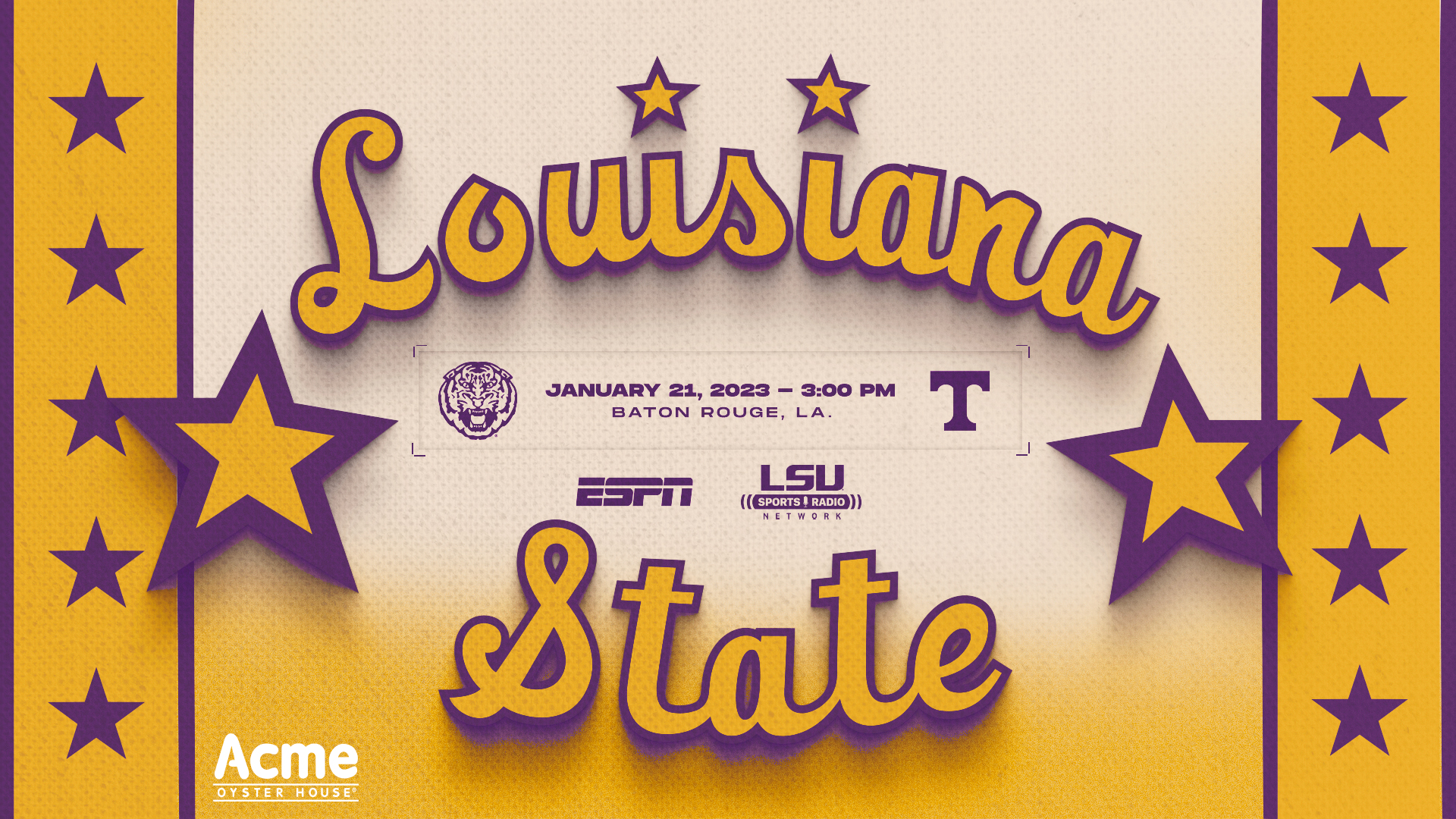 BATON ROUGE – LSU Basketball will go back to the late 1970s on Saturday with retro “stars and script” jerseys from 1979 when the Tigers of 2023 take on the nationally-ranked Tennessee Volunteers at the Pete Maravich Assembly Center.

The game is set to tip off at just after 3 p.m. with the game broadcast on the affiliates of the LSU Sports Radio Network with the Voice of the Tigers Chris Blair and former LSU basketball coach John Brady (Guaranty Media flagship in Baton Rouge, Eagle 98.1 FM). The telecast will air on ESPN with Courtney Lyle and Dane Bradshaw.

Tickets are available at LSUTix.net with in-person ticket sales beginning one hour prior to tipoff at the upper concourse ticket windows.

Our Lady of the Lake will be handing out Mardi Gras beads and 3-point cards to fans entering the building on Saturday and the first 1,000 LSU students will receive a free T-shirt commemorating the 1979 SEC Championship Tigers uniform.

That uniform was filled with stars and gold script writing that said “Louisiana State” on the jerseys and the Tigers will wear the retro jerseys during the game on Saturday in remembrance of Dale Brown’s 1979 Tigers, who won at that time the school’s first SEC Championship in 25 years. It marked the start of an amazing three years for the program as the Tigers also won the 1980 SEC Tournament title and in 1981, another SEC Championship and advancing to the NCAA Final Four.

Tennessee comes in ranked NO. 9 in the two major college polls with a record of 15-3 and 5-1 in the SEC. The Vols won on Tuesday night, 70-59, at Mississippi State, playing without a couple of their regulars.

Santiago Vescovi leads the Vols in scoring at 12.9 points per game. Olivier Nkamhoua averages 10.8 points, Zakai Zeigler, who had 24 points on Tuesday, is at 10.6 points and Julian Phillips averages 10.3 points for Coach Rick Barnes.

The Tigers continue to be led by super senior KJ Williams, who had 16 points in the loss to Auburn on Wednesday. Williams enters the game with 1,989 points, just 11 shy of the 2,000-career point mark.

Trae Hannibal off the bench also had 16 points in the game. While he struggled to score driving to the basket, he was fouled eight times and made 10-of-12 free throws.

Williams is averaging 17.9 points per game and 7.3 rebounds, while Adam Miller is at 12.3 points and 2.2 rebounds a contest.

“We are really looking forward to (Saturday’s) game,” said Coach Matt McMahon. “Great opportunity against a really terrific Tennessee basketball club. It’s an exciting day for the LSU program as we honor and celebrate coach Dale Brown’s 1979 SEC Championship team. Really started and was the beginning of a great era as it led into the 1980 SEC Tournament Championship and then the 1981 Final Four appearance for coach Brown and the Tigers. Looking forward to that celebration. Several of those former players and coach Brown will be present for that, so looking forward to them getting recognition for that historic season. Really thankful to our marketing team, equipment team and Nike, I’m sure you have seen the 1979 throwback jerseys … Our players are excited about that. Looking forward to a great crowd (Saturday) in the PMAC.”