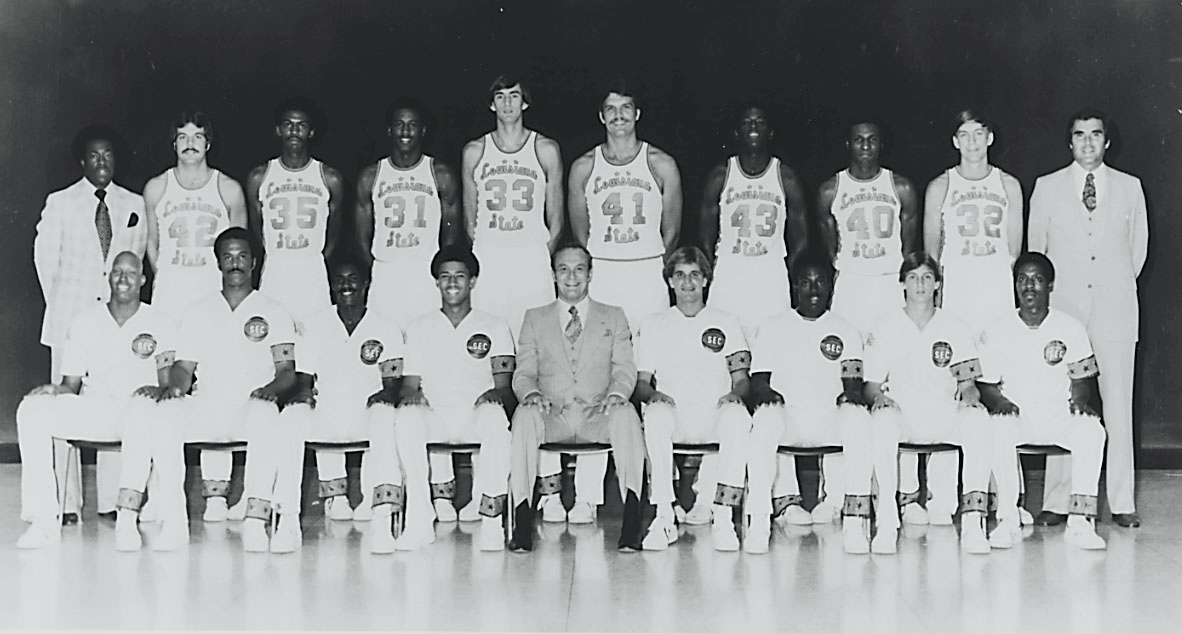 BATON ROUGE – So if you notice something a touch different when the LSU Tigers take the basketball court at the Pete Maravich Assembly Center at 3 p.m. this Saturday, it might just be the uniforms.

The Tigers will wear retro jerseys that were some of the most unusual in college basketball from 1979 with a flair all their own.

The jerseys were filled with stars and had Louisiana State in a big gold script among other things. Like big hair styles and loud colored clothes of the day, these things stood out in the college basketball world.

The Tigers will debut these “Stars & Script” uniforms on Saturday! pic.twitter.com/p3c5QiGclv

Now the urban legend is that the Tiger players of 1979 did not exactly care for the white jerseys with the stars and the fancy script, but fans who have had a sneak peek on social media are quickly trying to get their hands on these special jerseys that will see the light of day for the first time since 1979 on Saturday.

They must have been a little bit on the special side because the Tigers won their first Southeastern Conference championship in 25 years that season. Coach Dale Brown’s dream of success was just coming into fruition.

The 1979 team did what they had to do without superstar Rudy Macklin, whose season was ended two games into the year when he broke his foot coming down with a rebound in practice.

The names are many who contributed – Al Green, DeWayne Scales, Ethan Martin, Greg Cook, Willie Sims, Lionel Green, Jordy Hultberg, Rick Mattick – and there were many more. Players like J. Brian Bergeron, Joe Costello, Walter Campbell, Andy Campbell and Gus Rudolph all gave LSU the roster that could supplant the loss of Macklin.

Of course, Macklin would return and, along with players like Martin, Cook, Sims and young players Howard Carter and Leonard Mitchell and others, would go on to that magical NCAA Final Four year in 1981.

LSU was 2-2 and people were wondering if this really was the year for the Tigers.

But the Tigers would run off four straight wins. LSU would lose at Georgia on Jan. 27, but LSU would not lose again until it had won the title.

And about that game in which LSU celebrated like it may have never celebrated a championship before. It was Feb. 22, 1979 and Alabama was coming to town for the return match.

Well, it wasn’t much of a contest at all as LSU defeated Alabama, 86-66. A title was official. LSU players in that game weren’t even born the last time the Tigers won the SEC (that would be the Bob Pettit-Ned Clark era of the 50s if you need reminding).

It’s no urban legend that LSU did drop the championship banner from the rafters before the game was over, setting off a wild celebration on court and in the crowd in the final minute. It may be urban legend how that banner dropping before the game ended was orchestrated, but those stories and legends have grown geometrically as time has passed.

But that’s neither here nor there.

As time has gone on, teams like the 1980 SEC Tournament Championship and the Final Four teams have gotten a little more recognition, but this Saturday we do want to say thanks and congrats to a 1979 team that was part of one of LSU’s big-time steps in the college basketball landscape.

And, whoever designed and created these very different uniforms from 1979 then, kudos to you or all of you. Did the 1979 players like them? Not sure. But they were something special, and we remember that championship team Saturday by bringing those scripted and starred uniforms out of hibernation.