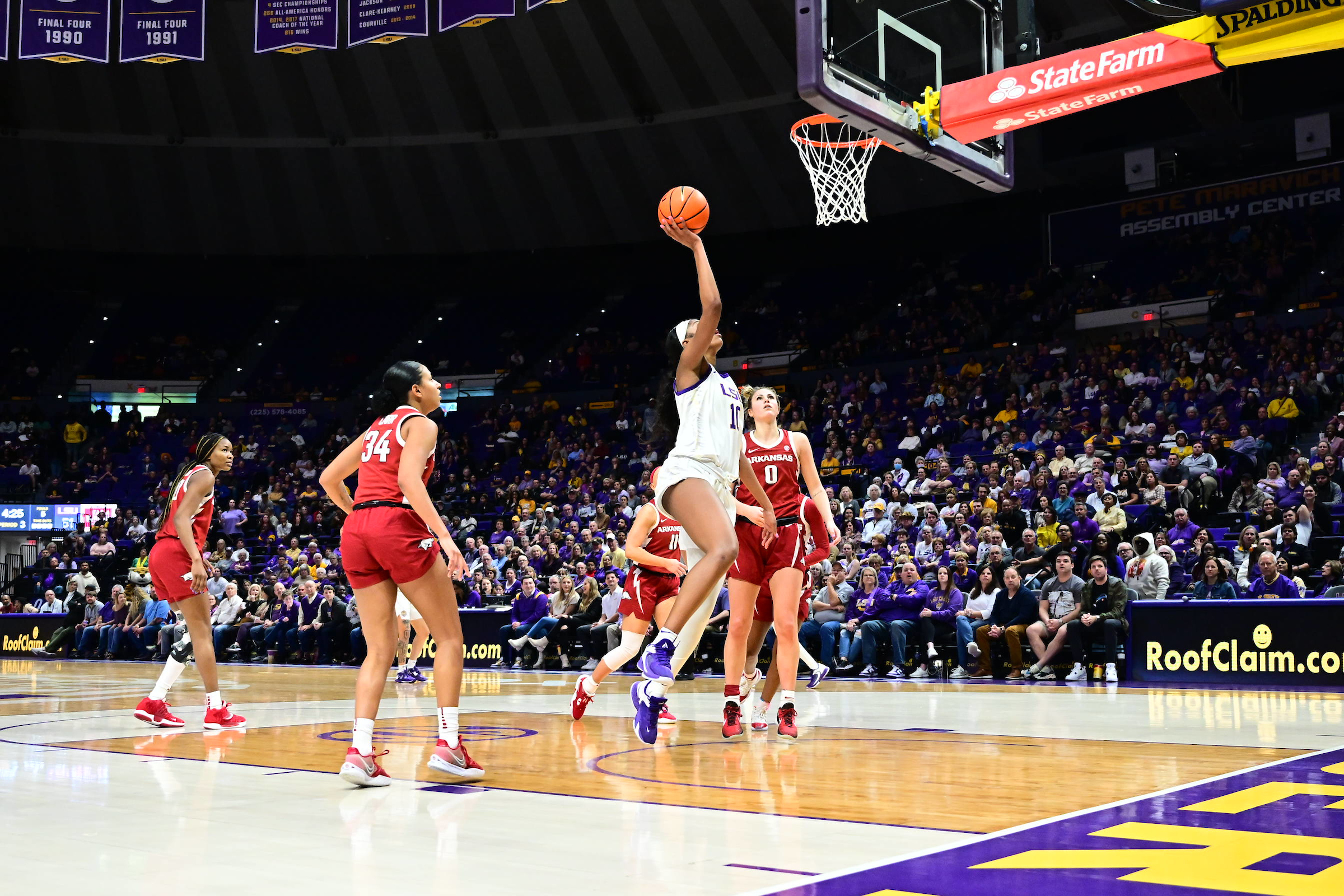 BATON ROUGE — Angel Reese scored 30 and recorded her 19th straight double-double, tying Sylvia Fowles’ LSU record as No. 3 LSU holds off Arkansas 79-76 in a thriller Thursday night in the PMAC. Both teams battled all four quarters as it came down to the final minutes of the game that saw two lead changes and crucial free throws.

In front of a raucous crowd and the student section dubbed “Kim’s Krewe,” Angel Reese had 30 points and 19 rebounds while Flau’jae Johnson had 19 points and 6 rebounds, hitting four key free throws in the games final minute to ice the game away.

Reese continues to tie and break records in her first year at LSU, recording a double-double in every game this year. It is the longest double-double streak in SEC history to begin a season. Fowles set her record throughout the middle part of her junior season in a stretch that ran from December 30, 2006 through March 3, 2007. Reese is averaging 23.9 points (1st SEC, 6th NCAA) and 15.4 rebounds (1st SEC, 2nd NCAA) per game this year.

“I just try to step up and be a leader and bring our team together,” Reese said. “Some of our teammates have not been in a moment like this, so I just tried to guide them and keep them poised and calm.”

Reese and Fowles are now tied for the second longest streak of consecutive double-doubles, trailing on South Carolina’s Aliyah Boston who recorded 27 in a row last season.

LaDazhia Williams earned her first double-double of the season as she tallied 11 points and hauled in 12 boards. In Williams last outing against the Razorbacks, she recorded a career high 15 rebounds. Jasmine Carson scored 10 more to continue her hot streak scoring in double figures in her last three games.

Arkansas shot 58.6-percent from the field throughout the second half of Thursday’s game as LSU was able to withstand the Razorbacks’ offensive onslaught.

LSU dominated the glass hauling in 51 total rebounds compared to Arkansas’ 26. Just as they did against Arkansas on December 29 in Fayetteville, Reese and Williams combined to outrebound the entire Arkansas team.

The Tigers got off to a hot start as they opened up the quarter on a 7-0 run all within the first minute of the game. Arkansas called a timeout at the nine minute mark to regroup and responded with a three to snap the LSU run. Johnson led the Tigers on another 7-0 run as she scored 5 points within a minute. With four minutes to go in the quarter the Razorbacks put together a 6-0 run to shorten the LSU lead to seven. The Tigers ended the opening quarter on a five-minute scoring drought only making 1 of its last 8 field goals. LSU ended the quarter with a 22-16 lead.

Reese broke the drought after sinking two free throws to extend the LSU lead back to seven. Carson scored her tenth points of the night as Reese picked up a block, drove across the court and found Carson on the wing for the open trey. At the first media timeout LSU led, 29-19, and looked to regroup as it was called for 4 personal fouls in the first five minutes of the quarter. After shooting 5 for 6 through the middle of the second quarter LSU ended the quarter 0-for-4 and went into the break with a 38-30 lead.

A minute and a half into the third, Reese earned her tenth rebound to tie Sylvia Fowles’ record for the longest streak of double-doubles in program history (19). At the five-minute mark Reese had recorded nine points all in the third quarter. Reese then lost a shoe in transition to defense, picked up the shoe with one hand and made a huge block with the other hand. Reese scored 9 points in a row for LSU just before forcing a timeout with 3:30 left in the third. The Razorbacks came out of the timeout and scored five unanswered points to make it a 3-point game. Reese made two crucial free throws before time expired and gave LSU a 4-point lead to head into the final quarter, 61-57.

Arkansas kept things close to start the fourth as it started to chip away at the LSU lead. Arkansas tied the game with 6:45 to play and then took the lead with a Daniels three to make it 69-66. Alexis Morris quickly responded on the following possession with a three of her own to knot things up at 69. The Razorbacks continued to find success from behind the arc as Daniels hit her second trey of the quarter to make it 72-69, Arkansas. Reese scored another tough layup with three minutes left in regulation to cut the Razorback lead to one, 74-73. The Tigers took the lead as Morris weaved through defenders and a finger roll finish made it 75-74, LSU. Arkansas won possession on a ball that was hit out of bounds and was then held to a shot clock violation by the Tiger defense with under a minute to go.

With 20 seconds to go Arkansas’ Barnum put up a three that bounced off the back iron and into the hands of Reese. Johnson was fouled at midcourt and went 2-2 from the line to give the Tigers a 77-74 lead with 16 seconds left in regulation. L. Williams fouled out with 6 seconds to play and sent Samara Spencer to the foul stripe to shoot two, Spencer made both. LSU got the ball in quickly and got the ball to Johnson who was fouled and made two more free throws to make it 79-76. The freshman’s clutch four free throws within the final seconds secured the 79-76 victory for LSU.