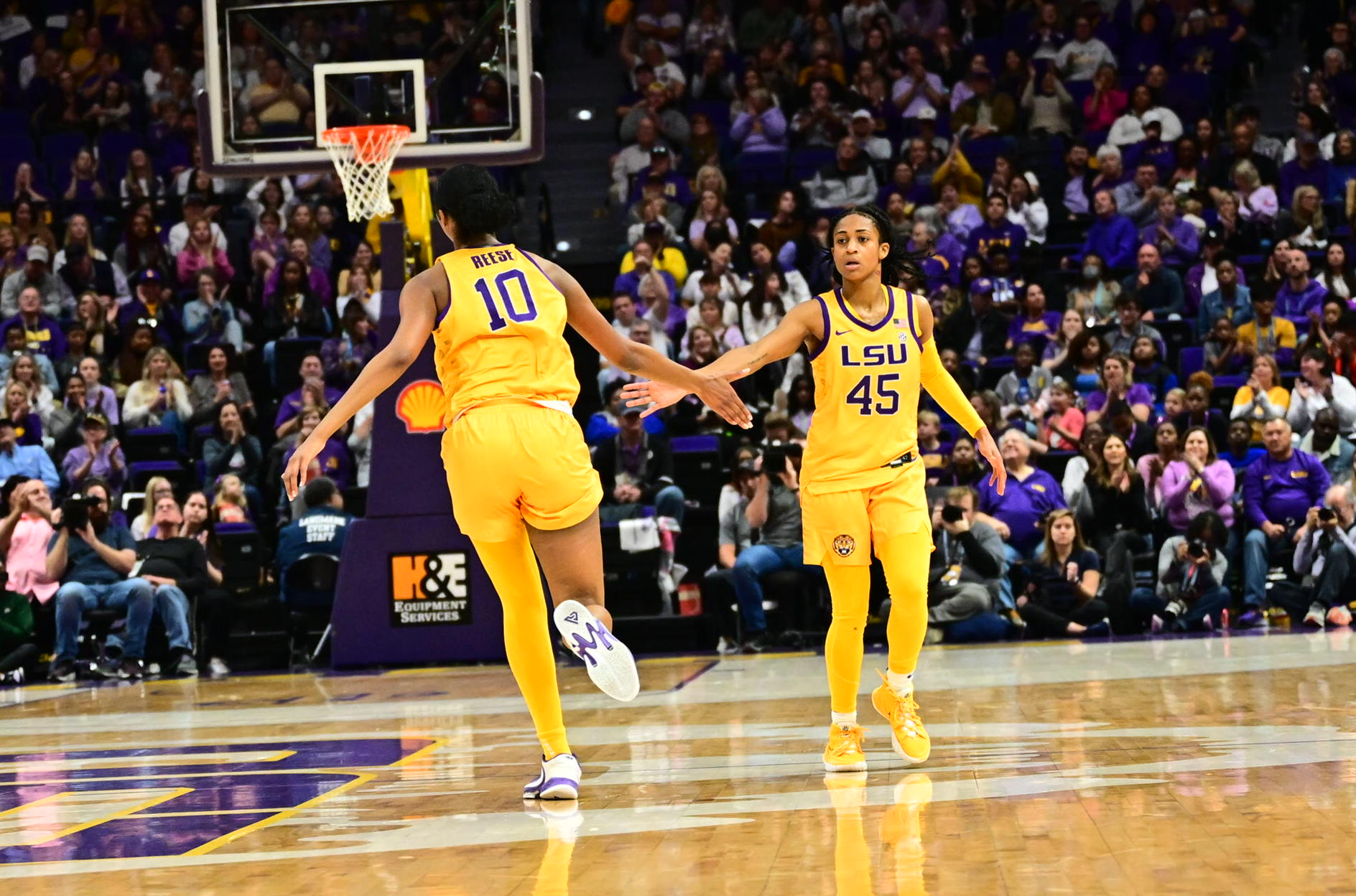 “Well what do you write first, because they are all incredible,” said Coach Kim Mulkey. “Starting with Seimone’s statue unveiling, the first female ever in the history of LSU sports to do it. I’d start there. A team that’s 18-0, there’s just so many things you can write, and they were all wonderful and meaningful.”

“It has meant a lot to me,” Reese explained. “I am just playing the game. I didn’t know I was breaking these records until you guys have mentioned it. But I am just doing whatever it takes to win and I am happy to just be mentioned with Sylvia Fowles and Simone Augustus. It’s really a blessing and I am happy.”

Alexis Morris earned a double-double for the second time this season with 12 points and 10 dimes in the win. Morris scored a season high 24 points in her last appearance against Mizzou.

Jasmine Carson made an impact once again racking up 18 points that included 4 big three pointers in tough situations. Carson scored 12 in her last time out at Missouri. Flau’jae Johnson, was the only other Tiger in double figures with 10 points and 4 rebounds.

Auburn was led by Precious Johnson with 13 points and 6 rebounds. She was followed by Kharyssa Richardson who scored 10 and recorded 5 boards. Two others scored 9 points for Auburn, Sydney Shaw and Sania Wells.

The Tigers will remain home as they host Arkansas on Thursday at 8 p.m. CT inside the PMAC on the SEC Network. LSU opened its SEC slate in Fayetteville with a 69-45 win over the Razorbacks.

LSU scored half of its points in the paint as the Tigers were dominant on the inside. The Tigers also limited their turnovers, something that has been a problem for them in recent games, giving up the ball eight times while collecting 18 assists as a team.

Carson got things started for LSU as she hit a corner three on the opening possession to begin a 5-0 run. At the first media timeout LSU held a 11-6 lead due to a Kateri Poole three just before the break. LSU went on a 10-3 run before calling a timeout with just under two minutes to play in the opening quarter. Poole pushed LSU past the 20-point margin with her second trey of the afternoon and Carson added on with a steal at midcourt and a layup on the other end. LSU finished the first quarter with a 9-point lead, 23-14.

Morris opened the second quarter with a circus act layup on a full court fast break after bringing down a board on the other end. Reese followed a possession later with a fast break layup of her own. The Auburn offense went 0 for 4 on field goals through four minutes and gave up 4 turnovers in that same timespan. Reese broke into double figures as she switched hands underneath the rim to finish a tough bucket through two defenders. On the final play before the half Morris drove inside and soared over two Auburn Tigers to finish the shot just before the buzzer sounded. Reese’s 11-point second quarter boosted LSU to a 41-22 lead before the break.

LSU ended the half with every starter in the points column. Reese led with 13 points and 9 rebounds. Carson scored 8 in the first half, she and Poole both had a pair of three pointers. Morris and L. Williams each added 6 more.

Reese opened the third by hauling in her 10th rebound and securing her 18th double-double in as many games this season. LSU opened with a 12-4 run and improved to a 27-point lead at the first media timeout of the quarter. Morris earned her double-double of the season as she found a streaking Johnson on her way to the rim for her 10th assist of the afternoon. Auburn put together a 9-0 run just before the end of the quarter as LSU 0 for its last 6 field goals in a three minute scoring drought. LSU held a 60-42 lead ahead of the final quarter.

After going back and forth to open the last quarter Auburn called a timeout halfway through the quarter to regroup. LSU responded with a 10-0 run as it went 6 for 6 on field goals in that same span to go up by 30 with 3:30 left to play in regulation. LSU broke past the 80-point mark as Poole assisted Emily Ward in transition to finish the left-handed layup.