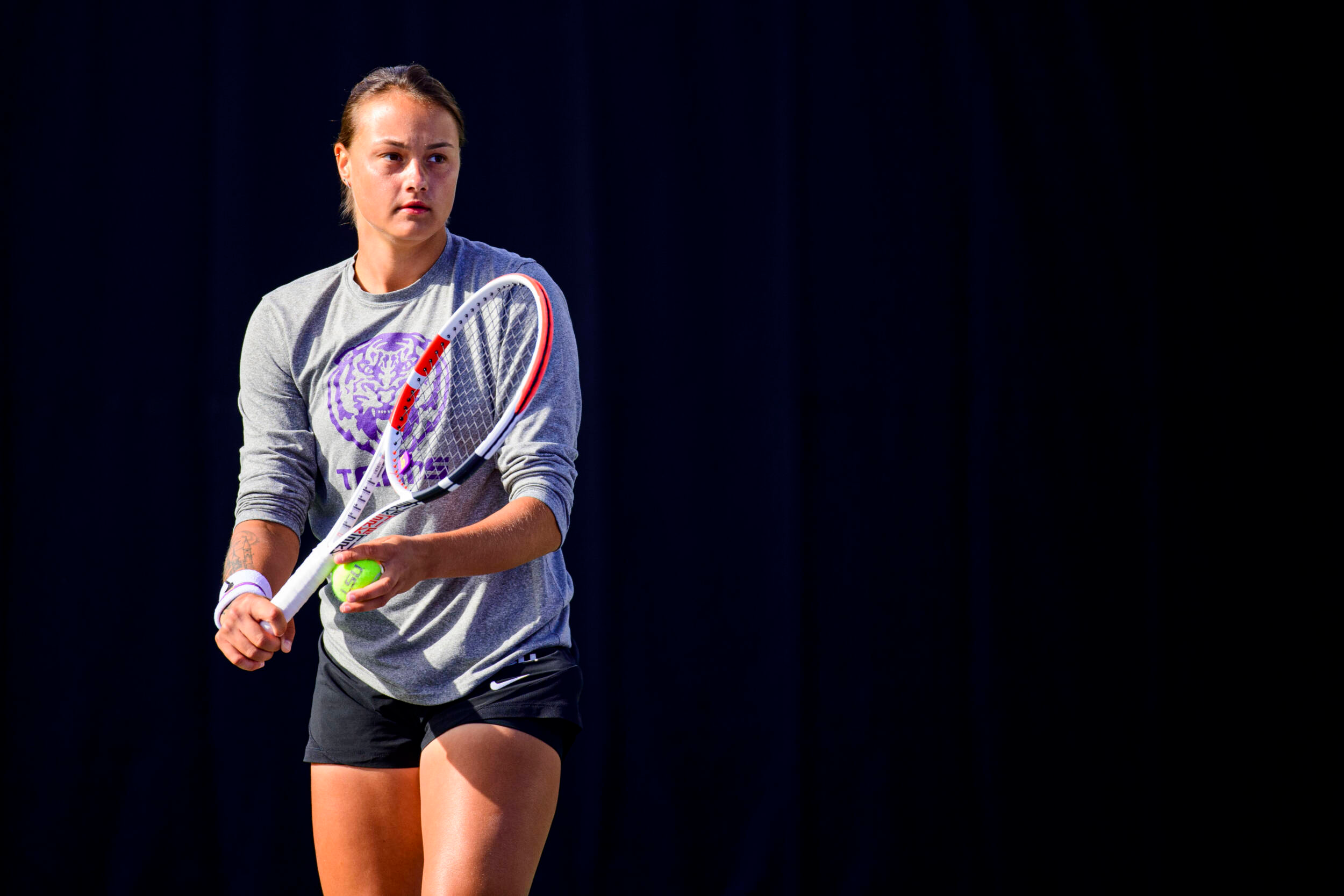 Doubles Results
Two rounds of doubles were on the plate on the opening day of the tournament. Junior Kylie Collins and redshirt-freshman Anastasiya Komar took on UC Santa Barbara’s Shakhnoza Khatamova and Amelia Honer to open the first round. The Tiger duo played a strong match together and won 6-4 to mark their first match as a doubles duo with a victory.

Senior Maggie Cubitt and freshman Nikita Vishwase also teamed up in doubles for the first time this season as they faced Stanford’s Emma Sun and Sara Choy. The Tigers played a dominant match, dropping only one game in a 6-1 victory.

At the next court, senior Nina Geissler and freshman Noor Carrington took on Jordyn McBride and Claudia De Las Heras from San Diego. The Torero duo came out on top in a 6-3 contest.

The final doubles match of the first round featured graduate student Mia Rabinowitz and senior Safiya Carrington taking on UC Santa Barbara’s Camille Kiss and Valentina Khrebtova. The LSU pair showed their experience and controlled the match in a 6-2 victory.

The second round of doubles featured the same doubles pairs for LSU facing different opponents. Collins and Komar continued their strong form as they defeated San Diego’s Elizabeth Goldsmith and Kailey Evans by a score of 6-4.

Carrington and Rabinowitz were in action once again against UC Santa Barbara opposition, this time in the form of Kiss and new partner Marta Gonzalez-Ballbe. Kiss and Gonzalez-Ballbe came out on top, defeating the Tiger duo by a score of 6-4.

Cubitt and Vishwase returned to action against San Diego’s duo of Abigail Desianikov and Solymar Colling on their court. The Toreros won the match by a 6-0 margin.

The final doubles match of the day saw Geissler and N. Carrington defeated UC Santa Barbra’s Calissa Dellabarca and Khrebtova by a score of 6-2.

Singles Results
All eight Tigers were in singles action on the day. Cubitt faced UC Santa Barbara’s Kira Reuter to open the round. The first set was a tight contest and required a tiebreaker to decide it, which was won by Reuter, 7-2. The second set had Reuter hold off Cubitt and win 6-3 to claim the win.

A top 15 matchup played out at the next court as No. 7 Collins faced No. 11 Connie Ma from Stanford. Ma was the victor in the match, winning the first set 6-1 before finishing the match with a 6-0 win in the second.

Another ranked match happened at the next court when No. 32 Komar faced No. 29 Solymar Colling from San Diego. Komar dominated the first set as she only dropped one game in a 6-1 win, but Colling struck back in the second set by narrowly edging out a 7-5 win to force a third set. The third set was back-and-forth and sat at 5-5 after ten games. Komar finished the match strong, winning the final two games to win 7-5 and claim her first ranked win of the spring.

Geissler took on Stanford’s Emma Sun in the next match. The back-and-forth first set was edged by Geissler, 6-4. Sun struck back in the second set with a 6-2 win of her own to force a decisive third set. The third set saw the players swap games all the way to 6-6, requiring a tiebreaker to decide the set and match. The tiebreaker was as close as the match, with Geissler able to win two straight points at the end to win 8-6 and secure a three-set win.

The freshman Vishwase picked up LSU’s first straight set singles win of the day as she took down UC Santa Barbara’s Marta Gonzalez-Ballbe, 6-3, 7-5.

Rabinowitz followed her teammate with a straight set win of her own, taking down Calissa Dellabarca of UC Santa Barbara in a dominant 6-1, 6-1 match.

Safiya Carrington took on Elizabeth Goldsmith of San Diego on her court. Goldsmith took an early lead in the first set and went on to win 6-2 before carrying momentum into the second set enroute to a 6-1 win to clinch the match.

The final match of the day saw Noor Carrington earn her first singles win of the spring against Valentina Khrebtova of UC Santa Barbara. Carrington dominated the first set, 6-1, and controlled the second as she won 6-3 to clinch a straight set win to end the day for the Tigers.

Up Next
Day two of the Torero Tennis Classic will start at 11 a.m. CT on Saturday. One round of doubles play followed by singles is the planned schedule.