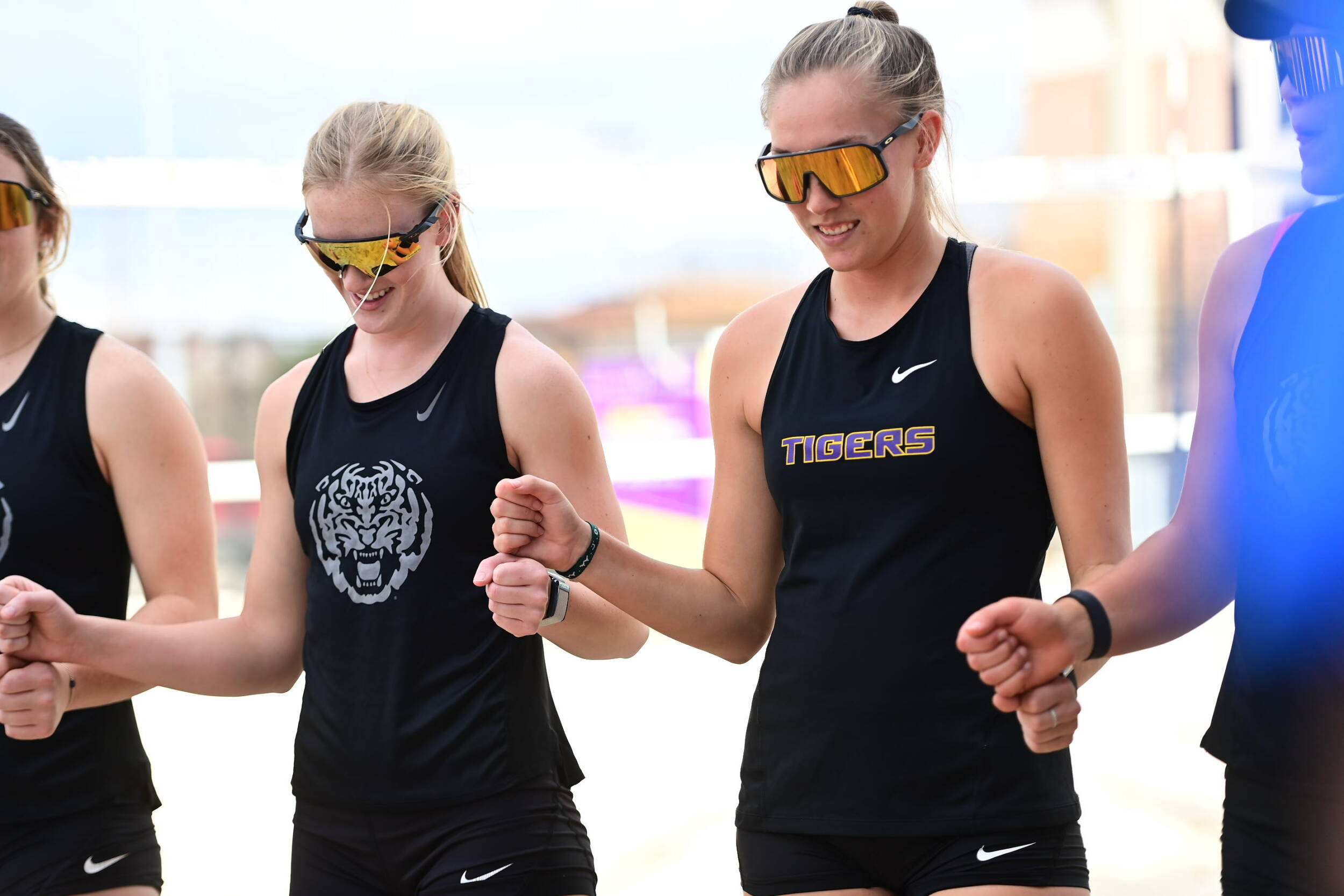 Baton Rouge – The LSU Beach Volleyball team kicked off practice for its 10th season Wednesday afternoon in preparation for the 2023 season.

The Tigers have competed as one of the top programs across the country throughout their first 10 seasons. Coming off a 2022 season going 32-12 overall, 12-2 at home, and 6-4 against nationally ranked opponents.

Vondran is a graduate transfer who previously played two seasons at both Ohio State and Dayton. Vondran helped lead the Flyers to consecutive NCAA Tournament appearances after winning the Atlantic 10 Championship in 2018 and 2019. The Columbus, Ohio native paced the team with 4.67 assists per set and 308 total assists during the 2019 season. As a Buckeye, Vondran helped the team reach the NCAA Tournament and back-to-back Sweet 16 appearances in 2020-2021. As a Tiger, Vondran assisted in leading the team to their first NCAA Tournament appearance under the direction of head coach Tonya Johnson. Vondran also earned a spot on the CSC Academic All-District Team for the 2022 season.

“Josie brings a unique indoor skill set as a long springy left-handed setter,” said Coach Brock. “I’m excited to see how she grows into the beach game and looking forward to seeing how her leadership helps our beach family.”

Flickinger is a junior who has played her collegiate career entirely at LSU. As a freshman Flickinger earned a spot on the SEC All-Freshman Team and had 7 career double-doubles. As that season concluded she finished with the second most points (228), kills (195), service aces (20) digs (240) on the team throughout the season. Flickinger also earned her spot on the 2021 SEC Fall Academic Honor Roll. Flickinger missed nearly the first half of the season of her sophomore season due to a knee injury. After overcoming that obstacle, Flickinger played the final 14 matches and 54 sets with 11 starts, totaled 33 kills with a .258 hitting percentage, also finished with 15 aces, and 77 digs. As a junior Flickinger led the team with nine double-doubles and had 20 aces on the season. She was also on the CSC Academic All-District Team.

“Paige had a fantastic juniors beach resume when she came to LSU,” said Coach Brock. “We’ve been waiting for her to join our program for a few years while she’s been incredibly impactful on the indoor team. Can’t wait to help her grow as a player and to watch her reengage with the beach game.”

O’Gorman led Lakewood High School to three straight MHSAA Final Fours as well as regional, district and conference championships. She was Michigan Miss Volleyball finalist in 2020 and was ranked No. 50 in the Prep Volleyball Top 150 for the Class of 2021. O’Gorman also earned the title of High School All-American and Ionia Sentinel-Standard All-Country Volleyball Player as a junior. She was a unanimous first-team All-State selection as a junior and sophomore and earned third team honors as a freshman. O’Gorman was First Team Region 7, All-Barry Country, All-Ionia County, and All-GLAC Conference in each of her first three high school seasons. As an underclassman O’Gorman was a part of the PrepVolleyball Frosh59 as a freshman, Soph79 as a sophomore, and a finalist for the publication’s Junior of the Year in 2019. She made the AVCA Phenom List in 2018, Volleyball Magazine Top 25 Underclassmen honoree as a junior, and was a member of the 2020 Prep Dig Top Offensive and Top Defensive Team selection.

“Aubrey’s height is a genuine asset to our program,” said Coach Brock. “We know that there will be a learning curve as she begins her official transition to the collegiate beach game, but she has great skills that will help with that process. Her attitude and mentality will also be fantastic addition to our program.”

With the 2023 season starting, the first practice centered around ball control, shot making and competition.

“I thought today’s practice was good,” said Coach Brock. “I don’t know if we are ready to beat the best teams in the country, but we didn’t’ need to be today. We just needed to come back, be in position to have a productive practice and to show skills that we are going to need to do that. I was really pleased with where we are right now and I am excited about where we are going to be when it matters.”

The Tigers return a number of last season’s starting lineup including Kylie Deberg, Parker Bracken, Ellie Shank, Grace Seits and Reilly Allred that the team will look towards for leadership. Bracken and Deberg went 14-5 on the season while Seits and Shank went 11-7. Allred comes back to the sand with a 32-11 record overall.

“The best part of practice was having the beach family back,” said Coach Brock. “The banter, laughter, effort, intensity and the appropriate emotions for a competitive environment. Everyone is getting after it, but they are also loving the support, the engagement and serving each other well. That’s who we are.”

Amber Haynes, Hannah Brister and Lara Boos look to expand their roles this season. Haynes is a quick and athletic defender while blockers Brister and Boos are quick-minded and powerful. Melia Linder, Elizabeth Masters, Brooke Blutreich have been at LSU for multiple years with limited playing time but are looking to make that push into the lineup.

Sophomores Cassidy Chambers, Ella Larkin, Madison Meyers will also have the opportunity to compete for playing time with lineup spots to fill.