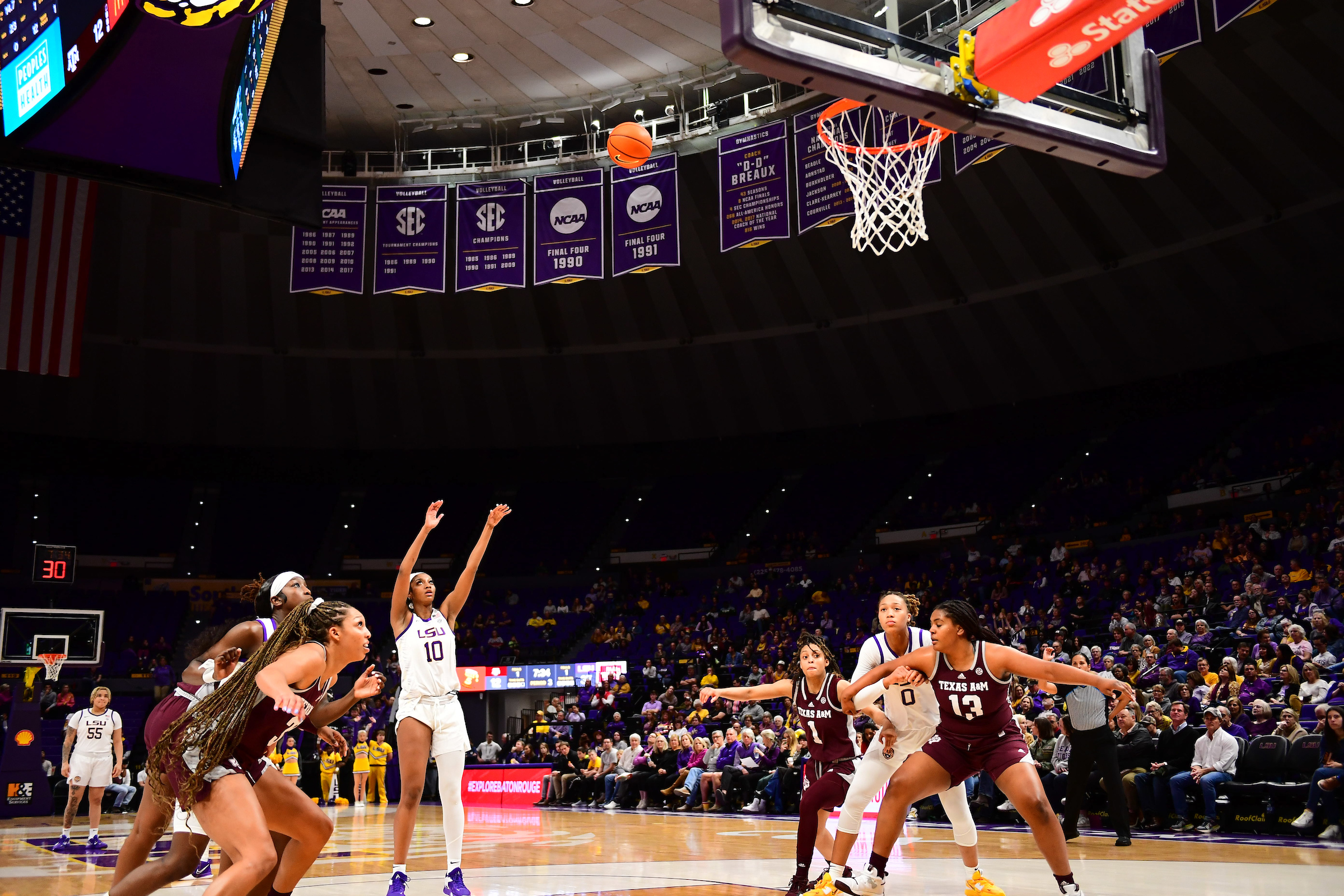 BATON ROUGE — The LSU Women’s Basketball team is 15-0 for the second time in program history, matching the best start by an LSU team ever which was also done in 2002-03, as the No. 7 Tigers took down Texas A&M, 74-34, Thursday night in the PMAC.

“​​I’m happy that we won,” said Angel Reese, who had a record-setting performance. “We started out slow in the first half so being able to bring more energy to the court. We brought energy from the defense to the offense, and I’m just happy that we won.”

Reese had her second 20/20 game of the season and 21st in program history with 26 points and set a LSU single-game rebounding record with 28 boards. The record was previously held by Maree Jackson who tallied 27 total rebounds two times. Once in each of her two seasons with LSU, 1977 and again in 1978.

Reese is just the third player since 2009 with 26 points and 28 rebounds in a game, according to Her Hoop Stats. The LSU standout is the first SEC player to have 25+ points and 25+ points in a game over the last 20 seasons. Reese is also the only Division I player with multiple 20-point, 20-rebound games this season. Her other such game was against Oregon State last month in Maui.

It is the most rebounds by a player in the SEC since 1982, the year the conference began sponsoring the sport of women’s basketball.

“There’s a lot of great players who came before me,” Reese explained. “On (January 15) Seimone Augustus’ statue is going up (at LSU). I want to be like that, I want to set records, I want a statue one day. Being able to look up to someone like Seimone or Sylvia Fowles. I want to be in the same columns as players like them. I’m very blessed to be in the situation that I’m in.”

Reese is entering a similar category as them, at least early in her career. With 15 double-doubles this season, she is four shy of Fowles’ 19 consecutive double-double record at LSU. Earlier in the season she had a stretch earlier this season with nine consecutive 20+ point games, becoming the first LSU player with such a streak since Augustus did so during the 2005-06 season.

With Fowles and Augustus, team success followed too. This year’s LSU team is now 15-0, matching the best start in program history. The only other time LSU started 15-0 was during Augustus’ freshman season. As Reese mentioned, LSU will unveil a statue in honor of Augustus on January 15, the same day LSU hosts Auburn.

Reese was followed by reigning SEC Freshman of the week, Flau’jae Johnson. Johnson scored 18 with 5 boards and added 3 steals. Last -Tear Poa was the only other Tiger to score in double figures as she set a season high 10 points in Thursday’s victory.

The Aggies were led by Sydney Bowles with 11 points and 4 rebounds. Eriny Kindred and Aaliyah Patty each scored 7 and combined for 13 rebounds.

No. 7 LSU will hit the road this weekend for a Sunday afternoon contest at Kentucky. The Tigers are scheduled to tip-off against the Wildcats at 1:00 PM CT in Rupp Arena.

After a slow start for LSU, four minutes into the game a steal from LaDahzia Williams led to a fast break layup from Last-Tear Poa to put the Tigers on the board for the first time. The score was knotted 4-4 at the first media timeout with four to play in the first quarter. A step-back jumper from Carson gave LSU its first lead of the night, Reese added two more half a minute later to extend the lead to 8-4. The Tigers finished the first quarter with a 8-6 lead over the Aggies. The 8 first quarter points marked the lowest scoring quarter for LSU this season.

Poole opened the second quarter with a wide-open three from the wing to give LSU a 11-6 lead. Johnson added four more after going 2-2 from the foul line and going coast to coast to boost LSU to a 9 point lead. The Tigers new found momentum pushed them to a 14-1 run through the middle of the second quarter. Just over two minutes before the break Reese secured a double-double with her tenth point of the game after already totaling 16 rebounds.

With second remaining in the half, Reese recorded a steal at halfcourt and dribbled once to her left before firing up a prayer that hit nothing but the bottom of the net to send LSU into the half with a 34-12 lead.

The Tiger’s held TAMU to 6 points for two straight quarters as a 26-point second quarter gave them a 22-point lead at the half. LSU scored 18 points in the paint, 10 off turnovers, and 11 fast breaks points. LSU out rebounded the Aggies 30-20 through one quarter, Reese finished the half with 17 boards.

LSU opened the third quarter on a 9-0 run that included Reese’s 21st rebound of the night breaking her previous career high of 20 rebounds in a single game. Seven of the nine points in the opening run belonged to Johnson who secured her 11th game scoring in double figures. LSU’s 11 points from the free throw line helped give the Tigers a 60-21 lead heading into the final quarter.