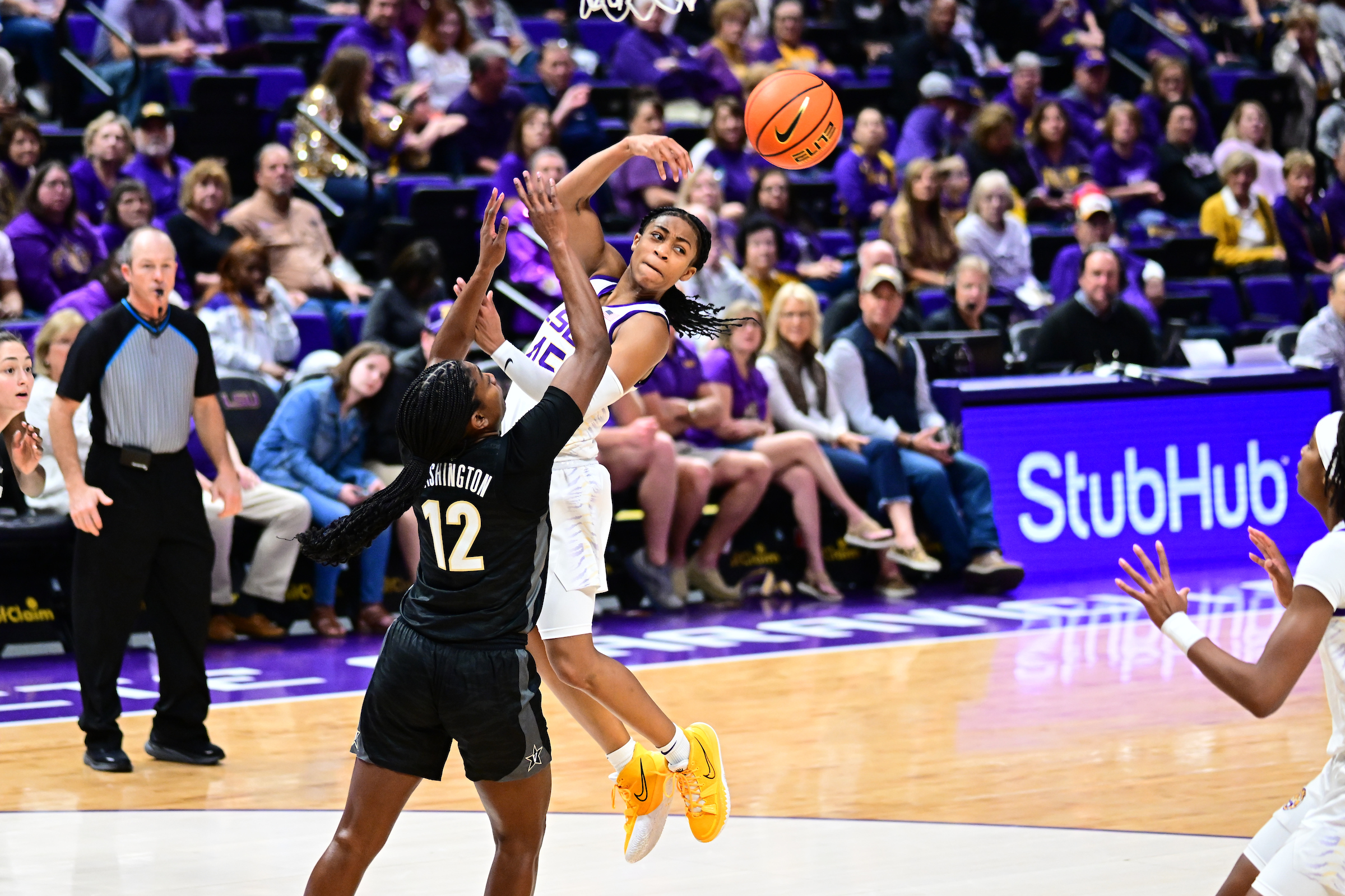 “I thought we shot the ball better today than we did at Arkansas,” Coach Kim Mulkey said. “That’s the first zone that we saw for forty minutes, so we were quite aware of what we were going to see. We hit some threes, but we didn’t just jack the ball up all over the floor.”

Angel Reese continued her double-double roll, collecting 21 points and 17 rebounds to record her 14th double-double in 14 games this season. Alexis Morris had her first career double-double with 15 points and a career-high 12 assists and only one turnover. Flau’jae Johnson contributed 20 points and 8 rebounds while LaDazhia Williams scored 12.

Reese scored the first points of the New Year and the game, but Vanderbilt scored the next five to open the game. Reese found Williams on the right block to end the run, but Vandy quickly responded with a three. LSU went back in front when Reese scored followed by a Carson trey to go up 9-8, forcing a Commodore timeout. After the teams traded buckets, LSU tied the game at 15 after a three-point play by Reese, giving her 8 early points. She reached double figures after sinking two free throws to put LSU back in front. Morris then got some momentum rolling for the Tigers, stealing the ball and taking it coast-to-coast before taking a charge on the defensive end to force another turnover with two minutes left in the quarter. Vanderbilt responded with a three. Flau’jae Johnson got on the board after LSU grabbed two offensive rebounds and she scored again in transition following a defensive stop. Vanderbilt scored as time ran out in the quarter with LSU ahead, 23-20.

Through the first three minutes of the second quarter, LSU scored the first three points to take a 26-20 lead as Vanderbilt called timeout. Johnson hit a corner three coming out of the timeout, assisted by Morris. LSU went up by double figures after Sa’Myah Smith stole the ball, drew a foul on the fast break and sank both free throws. Vanderbilt’s Harbison scored her 15th point on a three after the team traded some baskets to bring the game back within single digits. After Vandertbilt brought it back within six, LSU closed the half scoring the final five points to go into the break with a 45-34 lead.

Vanderbilt’s three-point shooting kept the Commodores in the game throughout the first half, going 5-12 from deep on the first half alone after entering Sunday with an average of 5.8 threes made per game.

Reese scored to open the half on a pick-and-roll pass from Morris, her seventh assist of the afternoon to tie a season high. Reese collected her ninth rebound of the game on the offensive boards and went back with it as LSU scored the first four points of the half and Vanderbilt took a quick timeout less than two minutes into the third quarter. The Commodores scored four in a row, going with a lineup consisting of four guards, as Vanderbilt refused to allow LSU to grow its lead as it hovered around 10 points. LSU led 51-40 going into the media timeout. Over the final five minutes of the third quarter, LSU began to exert itself with a 11-3 run, going into the fourth with a 63-45 lead.

Morris found Reese early in the fourth quarter for a layup as Morris collected her 9th assist, a career-high. Morris pulled up from three on the ensuing position to give LSU a 70-47 advantage. Morris recorded her 10th assist to give her the first double-double of her career when she found Johnson on the left wing for a three to go up 75-53. LSU continued to pull away in the game’s final minutes to win by 25 and remain undefeated.