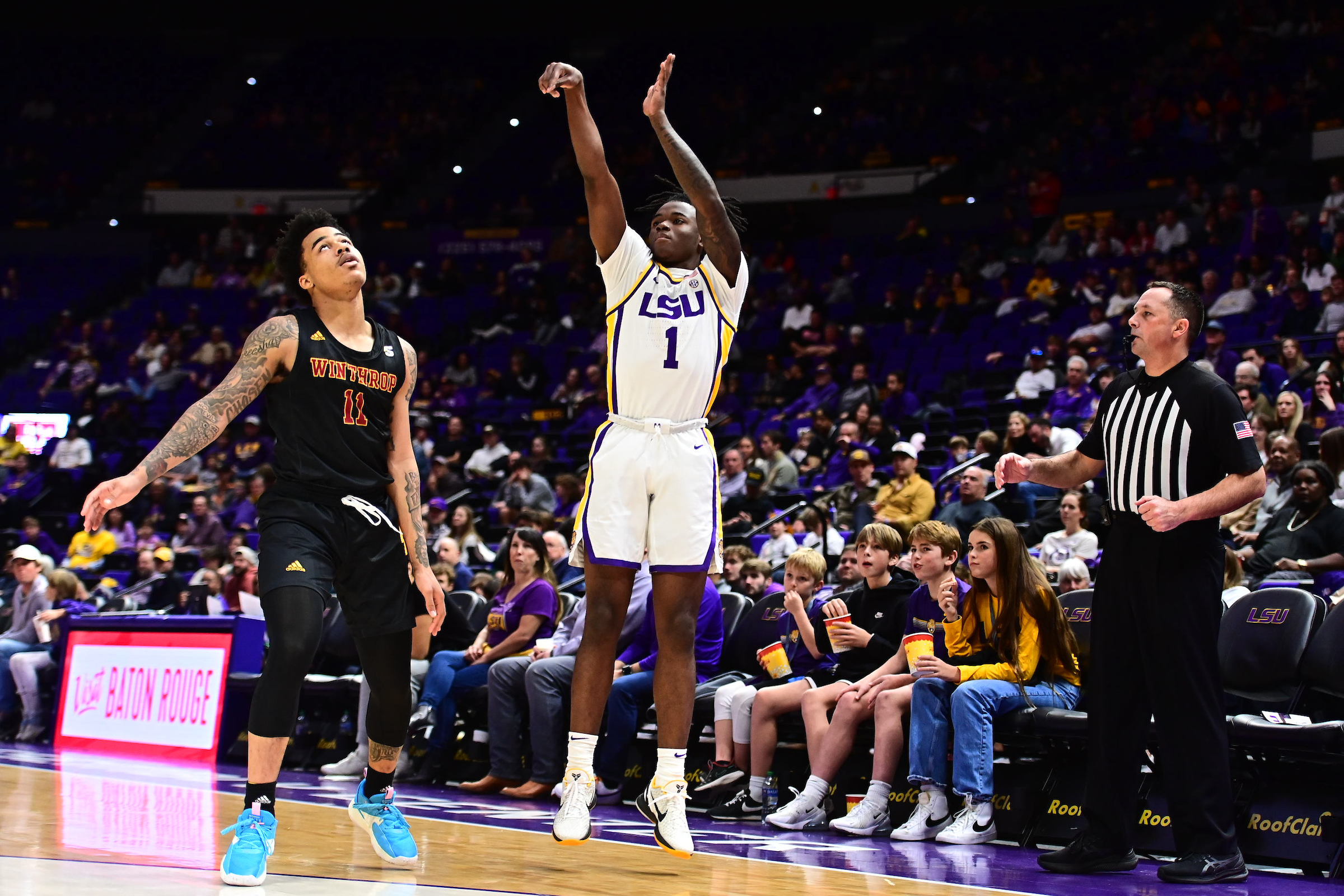 The Tigers have now won five straight games and LSU is 10-1 on the season. LSU is now 7-0 this season at the Maravich Center and has won 11 straight home games dating back to last season.

Hayes made 8-of-11 field goals in his second start for the Tigers and the NC State transfer made 4-of-6 from the three-point arc and 5-of-6 at the free throw line. He also finished with four assists, one turnover and two steals.

KJ Williams, despite being saddled with foul trouble, had 18 points and six rebounds, while Adam Miller finished with some key second half buckets to post 14 points with three assists. Trae Hannibal off the bench had just four points but had six assists and no turnovers in his 21 minutes.

Winthrop had two players post over 25 points with Cory Hightower hitting seven three-pointers in posting 25 points, while Kelton Talford made 11-of-15 from the field and scored 23 points. Sin’Cere McMahon added 18 points and Kasen Harrison had 11 points.

LSU built a quick nine-point lead, 14-5, four minutes into the game, but Winthrop (5-7) came back to take a four-point, 23-19, advantage with 12 minutes to go in the first half. The teams traded some leads the rest of the way with Winthrop taking the one-point halftime advantage.

After Winthrop took the 63-62 advantage, the Tigers were able to get some stops as Hays got a layup off a turnover, then off an Eagle miss, hit a three-pointer to at that point make it 71-65. Winthrop missed again and KJ Williams got a bucket to advance the lead to 73-65.

Winthrop would cut it back to five at 75-68 and then Miller responded with a deuce and a three-pointer to push to lead to 80-68 with 3:40 to go and the closest Winthrop could get the rest of the way was four points.

LSU closes out the pre-Christmas schedule on Wednesday night against East Tennessee State. While East Tennessee State is 4-8, they have lost their last four games by a combined 10 points. The game will tip at the Maravich Center at 7 p.m. and tickets are available at LSUTix.net.

“I thought it was a great team win. If you enjoy offense, three-point shooting, and a lot of points, it was a good game to watch. I think on our offensive end, clearly our most efficient performance there on the season. I was pleased at halftime. I thought the last 8-10 minutes of the first half we were checking the ball just to make sure it had a lot of air in it, just dribbled around, the ball didn’t move, lot of hero shots, and led to very inefficient play. But the second half, I thought we played the game the right way offensively. The ball moved side-to-side, a lot of great screens, we had 13 assists on our 21 baskets and shot 68-percent from the floor. Finally, in those last seven minutes, we were able to get one or two stops. There weren’t many stops in the game, but in those last seven or eight minutes, we were able to get enough to get the win. Overall, I thought it was a great team win and a fun game to watch.”

“No, I thought we’d be able to guard them better, honestly. Credit to Winthrop and Coach Prosser, they have a nice formula where they really shoot it well from three, and they have a guy down in the post in (Kelton) Talford who shoots 85-persent in the paint, from the floor. I believe he’s fifth in the country in field goal percentage, so skilled. So, that’ll put you in some tough positions and then (Kasen) Harrison is really good in the ball screens, and I think he put a lot of pressure on our defense. They scored a lot more than we would have liked, I thought they were struggling with turnovers coming into the game, forcing turnovers has been a strength of ours this year, but we just weren’t able to turn them over very much. Nonetheless, unfortunately on the offensive end, we were able to execute there really well in that second half, and score enough points to win.”

“He was awesome, I mean awesome. Anytime you score 25 points on 11 shots, that’s a good night at the office right there. He was so efficient, shooting it well from three, took high percentage shots. He also got four assists and one turnover. We’ve just been a very efficient offensive team with him on the floor. I think through the first eight games we were averaging 12 assists a game, the last three games we were up around 18 and that’s coming off of a game we went 4-of-25 from three so it could easily be 19-20 assists per game there. He’s just been terrific. He’s a very smart player and he’s really stepped into a huge role for our team.”

Head Coach Mark Prosser
On the difference in the game …
“I think obviously given the 51 points in the second half, we asked and I’ve said this before, our situation and personal lives change by the minute. We asked a bunch of guys, six or seven maybe, to play high twenties and that’s asking a lot for anybody, the minutes per game. A bunch of teams across the country talk about that … They have good players and our kids go out there and battle and fight. I think a little bit of that took a toll on us. At the end of the day, we don’t make excuses. Their shooting percentages in the second half were ridiculously high.”

On forward Kelton Talford’s performance …
“Again, asking him, and there’s other guys that are out there playing well, as well. The things we ask for, on a game-to-game basis, he is continuing to deliver and I think he had a pretty good point as well. From all stretches, I think he was most impressive. I think we had some good offensive plays from a bunch of guys. We’ve worked hard and I told our guys to walk out of here with our head held high. We worked very hard. We focused on a lot of things I thought we knew from our last game.”