Deriek Fountain had his first college double double with 17 points and 14 rebounds to pace LSU. 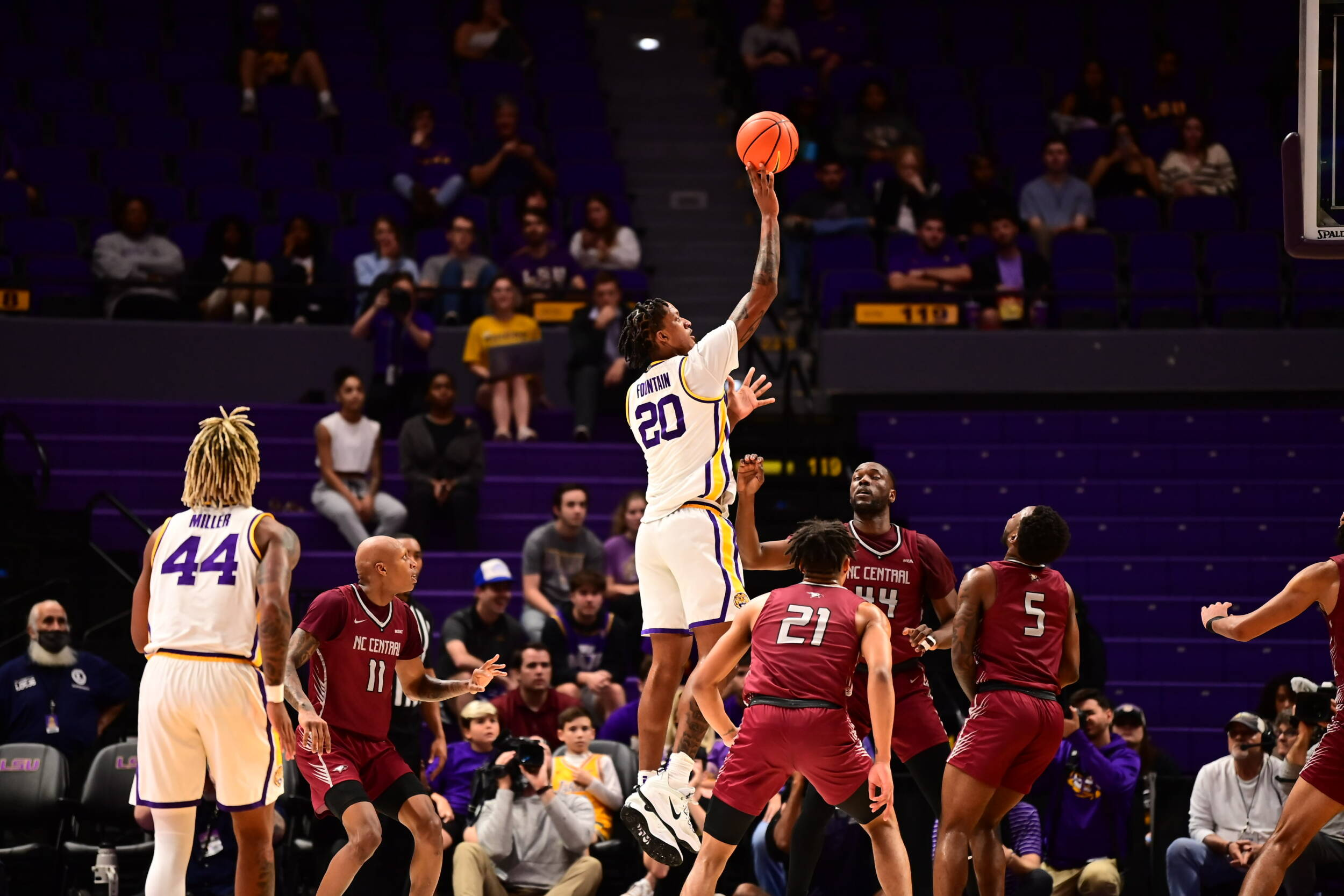 BATON ROUGE – Derek Fountain and KJ Williams combined for 35 points and 26 rebounds as the LSU Tigers ran their record to 9-1 on the season with a 67-57 win over North Carolina Central University Tuesday night at the Pete Maravich Assembly Center.

Fountain, a junior transfer from Mississippi State, had 17 points, 14 rebounds for his first college double double. He was 6-of-9 from the field, 5-of-9 from the free throw line with 1 assist, 2 blocks and a steal.

KJ Williams, the super senior who came in from Murray State, had 18 points, 12 rebounds in posting his 31st career college double double (fourth of the season), hitting 7-of-13 field goals, including his 100th career three-pointer, to go with 2 assists, 2 blocks and a steal.

Cam Hayes also had 14 points on 6-of-10 shooting with two treys to go with seven rebounds before leaving the game late in the second half with what Coach Matt McMahon called “cramps.”

The game had 10 lead changes in the early going as NCCU was shooting well and Fountain, who had a strong start on the boards that led to buckets and free throws, was keeping LSU even.

NCCU tied the game at 23-23 with 6:24 to go before KJ Williams dunked off an Adam Miller pass and then went to the free throw line for three makes after getting fouled on a distance attempt. Then it was Fountain and KJ Williams again that pushed the LSU lead to 32-23 with 3:52 to go in the first half.

The Tigers scored the last six of the half on three-pointers by Hayes and KJ Williams to make the LSU lead, 14, 40-26, at intermission.

Justin Wright scored 14 points to lead NCCU, while Brendan Medley-Bacon and Devin Butts had 10 points each. The Eagle shot 43.6 percent for the game (43.6%), making seven threes and 2-of-8 at the free throw line.

Opening Statement…
“It’s always good to celebrate winning. I’m proud of our players finding a way to get a win today. I thought we had stretches where we played very well, but still continuing to search for consistency like every team in America. I thought we had some tremendous individual efforts. The front court with KJ (Williams) and Derek (Fountain) in the first half; I believe they were 29 points and 14 rebounds were great. And then, Cam Hayes just continues to play at a high level. Overall, we want to win the game – that’s the ultimate goal to go 1-0. But also searching for improvement. We have not been a good defensive rebounding team to this point in the season, especially on the perimeter. That’s the second-straight game Cam has been terrific there, got seven rebounds tonight. He had five against Wake (Forest) in the win on Saturday. We limited them to four offensive rebounds after holding Wake Forest to just one offensive rebounds in the last 24 minutes of that game Saturday. Hopefully, we’re improving there and making some progress. A lot of respect for Coach (LeVelle) Moton and North Carolina Central. He’s won a lot of games, a very talented team. They’ll contend to go back to the NCAA Tournament again this year, so excited to get the win.”

On the start from Cam Hayes and Derek Fountain plus an update on Hayes’ health…
“The second part there on Cam, just a cramp, so I expect him to be fine. I was concerned making sure it wasn’t a rolled ankle, but he just got a cramp chasing down that last layup. He should be good to go tomorrow as we head into Saturday. Can’t say enough good things about (Derek and Cam). Them going into the starting lineup, it’s not a demotion of anybody, it’s not anybody getting benched. It’s two guys who have been very consistent in practice. Their effort, their energy, their ability to impact winning. It’s amazing how this works. You carry it over from the practice floor to the game floor, so really happy for them and the success they’re having. The thing I would mention with Derek is you see 17 (points) and 14 (rebounds), that’s great. He’s providing leadership. His effort, his hustle, that becomes contagious throughout the team. For Cam, the same thing. He’s been very efficient. He’s moving the basketball, he’s taking high-quality shots, and I can’t say enough about even defensive rebounds at the guard position. Happy for both of those guys and hope those practice habits continue to lead to success on the court.”

Opening Statement…
“A tough loss. We thought we game-planned well. I think we let the lead get away from us in the first half at the four-minute mark. We did not close the half like we would like to. (LSU’s) Front court really dominated in the first half. (LSU’s KJ Williams and Derek Fountain) They are great players, so they do not need any additional help. We had some defensive breakdowns at that end of the floor that allowed them to get going. I thought we did a great job defending their guards, (LSU’s) Cam Hayes came in and made some huge shots. We were only two-for-eight from the free-throw line, I thought that was the difference. We allowed them to shoot only 41 percent, which is great, but they made up and supplemented that point differential from the free-throw line. They shot 18 free throws and that’s always tough. We have got to do a better job of finishing and getting better on the defensive end of the floor.”

On playing a team like LSU early in the season …
“Hopefully, it can carry over. We are not going to see a front line as big and dominant and that strong. They are (LSU) just physical, so anytime you are playing Power Fives, the difference a lot of times is in the trenches, whether it is football or basketball. The skill positions are pretty much all of the same, but them trenches, that is where the difference is glaring. We just have to get physically stronger, compete better, and rebound the basketball a lot better to give ourselves a chance to have a great season.”