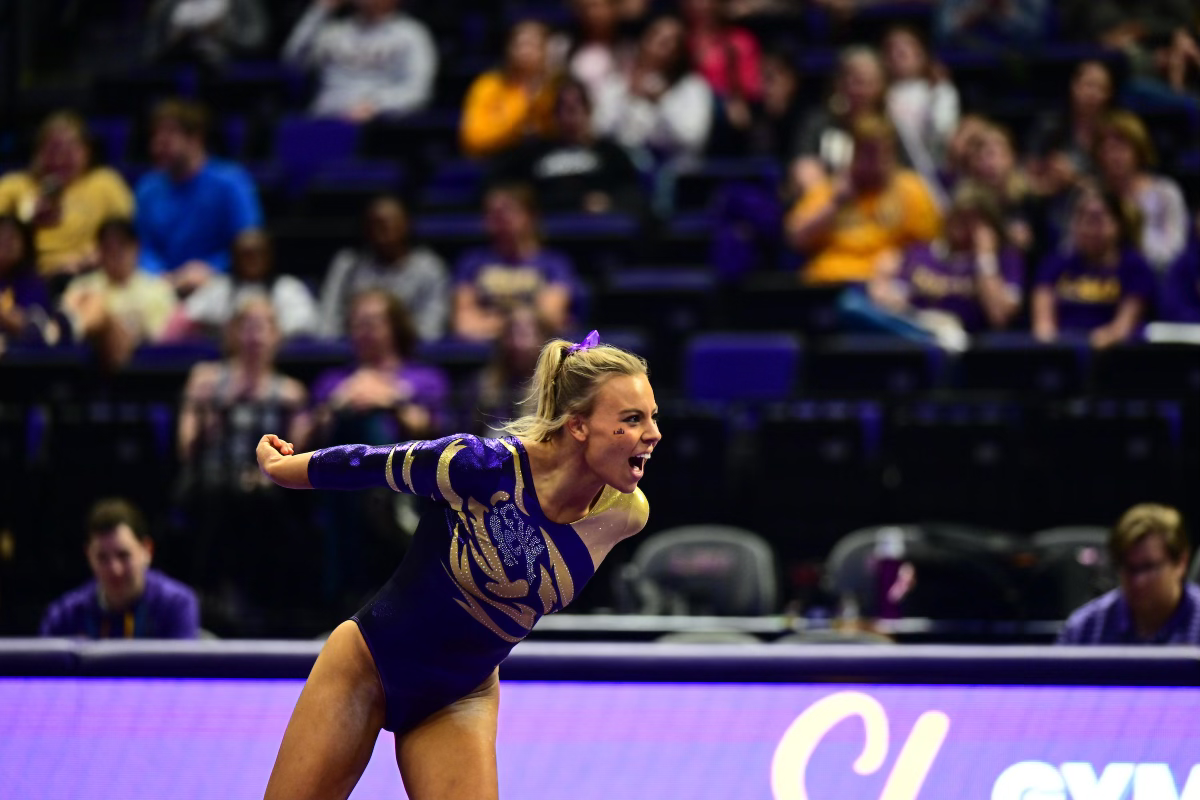 BATON ROUGE – The LSU Gymnastics team previewed the 2023 squad during its annual Gym 101 showcase on Monday night in the Pete Maravich Assembly Center.

“I am really pleased with how we did,” said head coach Jay Clark. “We did 37 routines tonight, and certainly there were some execution things that we need to work on, but that’s to be expected the first time you get out here. You’re going to look a little rough around the edges, but I feel really good about the hit ratio. That’s what you want this time of year. As a coach, that’s about all you can ask for in the middle of December.”

Elena Arenas led off an impressive vault lineup for the Tigers. Nine girls competed in the rotation in front of a raucous crowd. Sophomores Aleah Finnegan and KJ Johnson vaulted in the fifth and sixth spots to start off their second year. All-Americans Kiya Johnson and Haleigh Bryant picked up where they left off and brought experience to the lineup. Freshman Bryce Wilson threw an impressive vault to show for her first routine in the PMAC.

Senior Kiya Johnson led things off for the bars squad and opened the event strong. Freshman Ashley Cowan performed her first routine in the PMAC on the event. Junior Haleigh Bryant showcased a new dismount. Arenas, Aleah Finnegan, Tori Tatum, Olivia Dunne and Kamryn Ryan all got a chance to showcase their skills as well.

After missing last season due to an injury, senior Kai Rivers returned to the beam lineup with an impressive leadoff routine to set the tone. Freshman Bryce Wilson followed and got her first beam routine under her belt. The beam squad hit every routine with Kiya Johnson, Alyona Shchennikova, Aleah Finnegan, Sierra Ballard, KJ Johnson and Elena Arenas performing nearly flawless routines as well.

Ballard brought the crowd to life and lead off the floor squad for the final rotation. Shchennikova, KJ Johnson, Finnegan, Bryant and Kiya Johnson all executed their routines in fashion. Chase Brock closed out the night with an exciting final routine.

The Tigers will officially kick off the 2023 season on January 6 against No. 3 Utah in Salt Lake City at 8 p.m. CT. The meet will be broadcast on ESPN2.