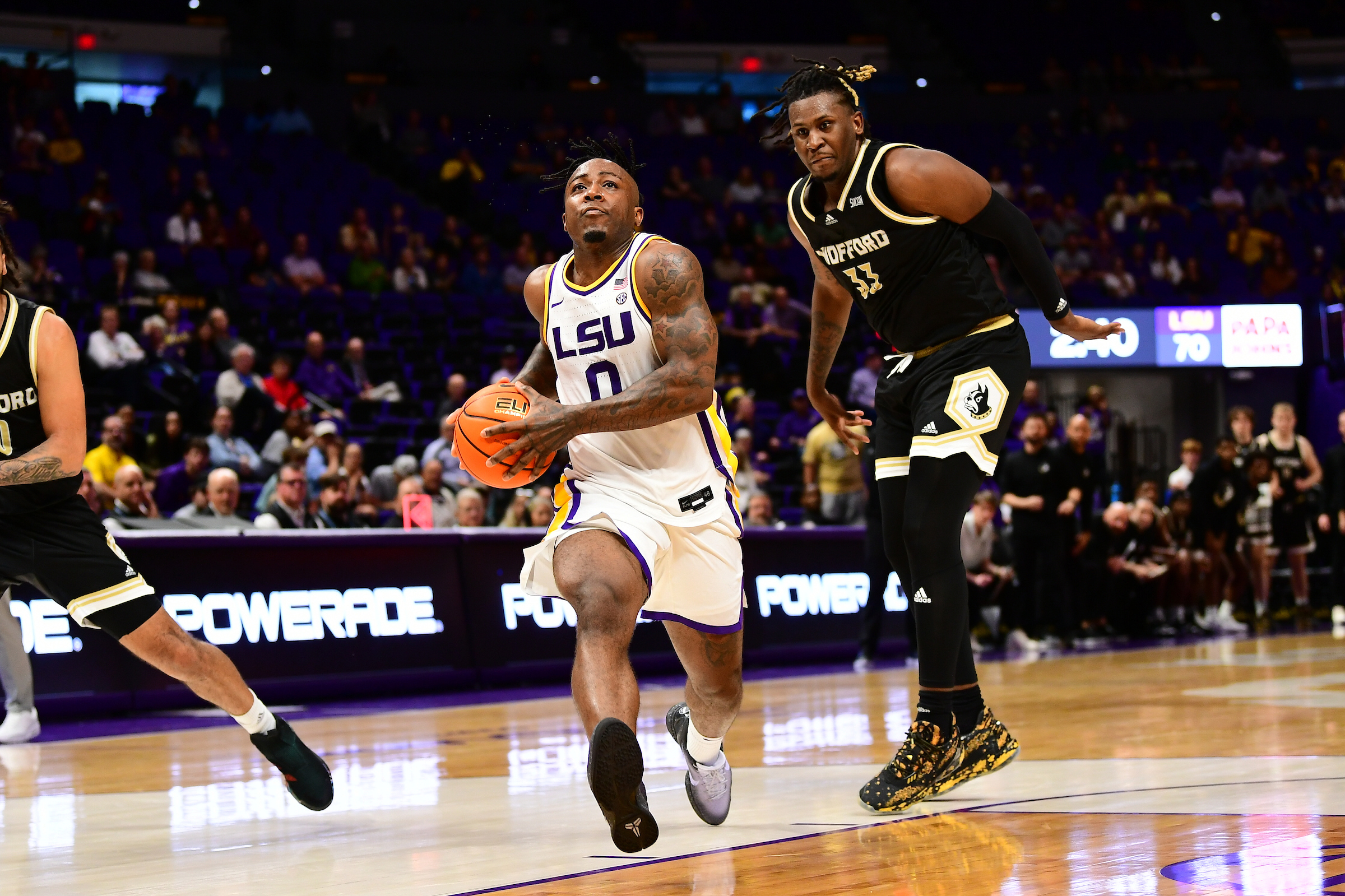 BATON ROUGE – The LSU men’s basketball team rallied from five points down in the final 4:31 of the game to defeat the Wofford Terriers, 78-75, Sunday afternoon at the Pete Maravich Assembly Center.

The Terriers (4-3) had taken a 71-66 lead on the team’s 11th three-pointer of the game and the third for Carson McCorkle.

Coming out of an LSU timeout, Trae Hannibal was fouled and made two free throws to cut the Wofford lead to 71-68. But Wofford after a three-point miss got a put back by B. J. Mack to push the lead back to five, 73-68, with 3:40 left.

Hannibal was again able to help LSU with his own offensive rebound that resulted in a layup to bring it back to three, 73-70.

Wofford miss a three and Hannibal off a KJ Williams rebound got another layup to cut it to 73-72 for the Terriers. After another missed shot Adam Miller got a defensive board and then scored to give LSU the lead for good at 74-73.

After a couple of turnovers by both teams, LSU came down and Miller hit a three-pointer from the deep corner in front of the Tiger bench to give LSU a 77-73 advantage that they would not relinquish.

LSU’s defense clamped down causing a turnover and allowing only two free throws as the Tigers closed the game on a 12-4 run to get the win to run their record to 6-1 on the season.

LSU did not allow a made three pointer in the final 4:31 of the game.

Jackson Paveletzke had 19 points and five assists to lead Wofford, while Mack had 18, Corey Tripp 14 and McCorkle 11.

LSU shot 52.8 percent from the floor for the game, making 28-of-53 for the game. The Tigers shot better than 50 percent in both halves and made eight three-pointers. The Tigers were 14-of-17 from the line.

The Terriers out rebounded the Tigers, 30-26, including 9-5 on the offensive glass. Wofford had a 14-6 advantage in second chance points, including 12-0 at one point midway in the second half.
The game featured 8 ties and 19 lead changes with 12 of those coming in the second half. LSU led by 37-33 at the intermission.

The Tigers are back in action on Friday at 7 p.m. at the Pete Maravich Assembly Center when they host UT-Arlington in a game broadcast on the LSU Sports Radio Network and steamed on SECN+. Coach Matt McMahon’s weekly radio show will have its season debut on Monday night at 7 p.m. at TJ Ribs on Acadian Thruway and on the affiliates of the LSU Sports Radio Network.
—
LSU vs. Wofford
November 27, 2022
LSU Head Coach Matt McMahon Quotes

Opening Statement …
“It has really been a long 19 days. This is our seventh game in 19 days. We would love to be sitting here 7-0, but we are thankful to be 6-1. Credit to Wofford, I thought they really executed. They put us in tough spots offensively. Their freshman point guard (Jackson Paveletzke) is terrific. (B.J.) Mack on the perimeter, at the five spot, is a difficult match up. Then they shot so well from three. With all that said, on a day where I don’t think we played near our best, down five with 4:25 to play, we used a timeout and I thought our defense down the stretch was terrific. We were able to make enough plays to get the win. I’m proud of our players for finding a way to win. I thought our bench was huge for us and brought great energy. I was excited to see Trae Hannibal play so well, I thought Cam (Hayes), Derek (Fountain), and Kendal (Coleman) were fantastic. K.J. (Williams) and Adam (Miller) did the things they’ve been doing all season long.”

On the team being possibly tired …
Maybe I’m just old school on that stuff, I just think we only get to play 31 games a year and you have to be locked in, ready to go, and play with great energy every time. You can be tired in April and May, so we have to learn from it and play with more energy early.”

On Trae (Hannibal)’s efforts in the rally …
“I thought Trae gave us a huge lift on the defensive end. We finally were able to get some stops. There was a point there in the second half where they were shooting 67%, so it had become a half-court game. We finally got some stops and it enabled us to get out in transition. Trae is one of the guys we have who will play fast in the open floor. He was able to get to the rim and finish the plays. I thought he also did a really good job moving without the ball. He had a couple of backdoor cuts, where we were able to feed him for some layups.”