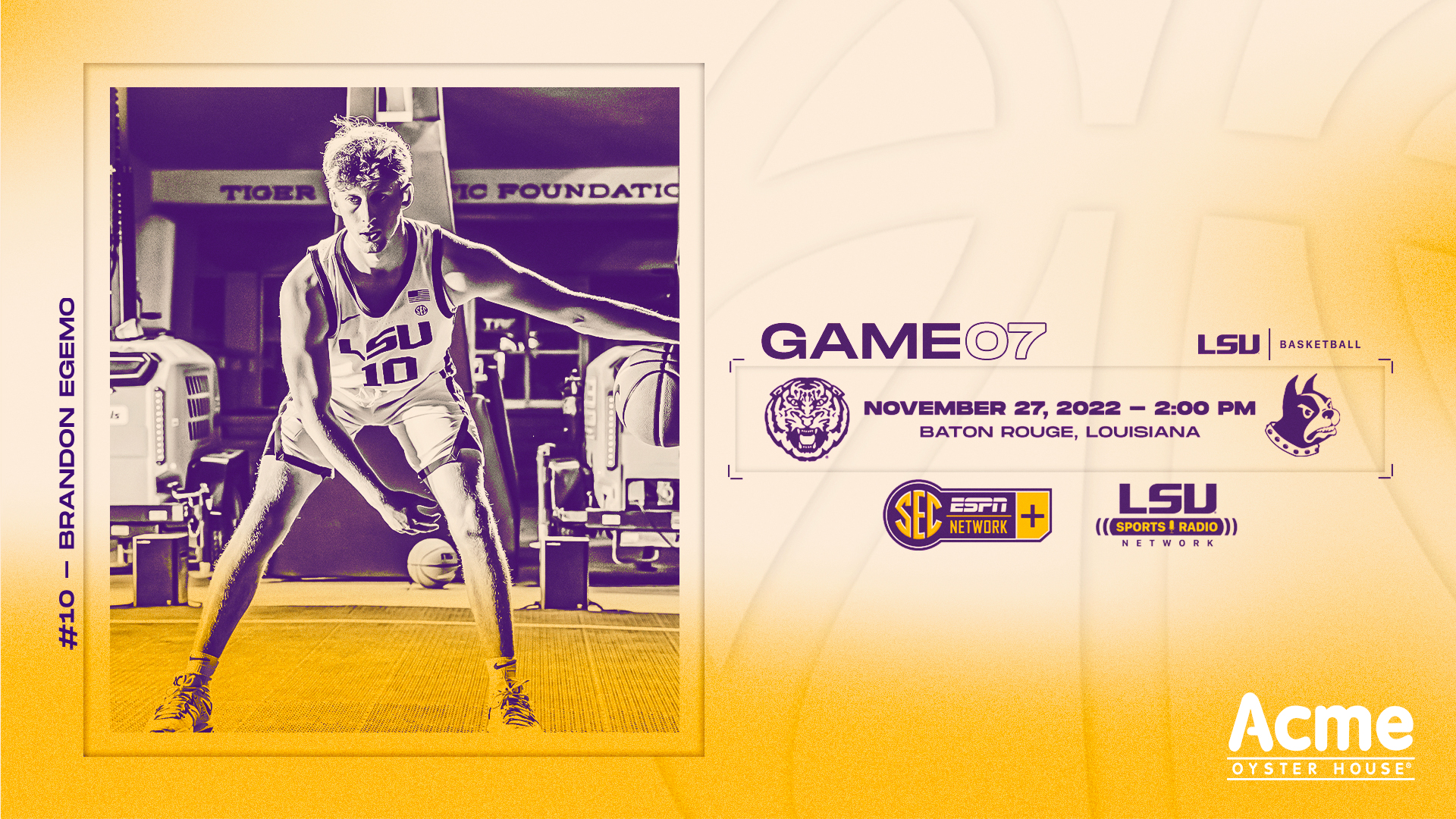 Tickets for the game are available online at LSUTix.net and at the upper concourse ticket windows of the Maravich Center beginning one hour prior to tipoff. Tickets are available for $5 for those bringing a food item for donation to the LSU Food Pantry. LSU students are admitted free with a valid LSU ID.

The Voice of the Tigers Chris Blair and former LSU head coach John Brady will have the call on the affiliates of the LSU Sports Radio Network (Guaranty Media affiliate 100.7 FM The Tiger in Baton Rouge) and streamed on SECN+.

The Tigers will be looking to rebound after falling on Wednesday to Kansas State, 61-59, in the championship game of the Cayman Islands Classic. LSU appeared to have the tying bucket on a layup by Trae Hannibal as the buzzer sounded but, an error by the timekeeper at the gymnasium, after review showed that LSU would not have scored in the time (4.7 seconds) left on the clock.

So, in Sunday’s game, the 5-1 Tigers will be trying to get their momentum back after their first disappointment of the 2022-23 season.

After the game on his postgame radio show, Coach Matt McMahon said: “”It was a crushing loss, but I told the team after the game ‘The last time a team went undefeated in college basketball was 50 years go’, so a lot of it is how do we respond to the losses. As disappointing as it is, we have to move forward … and then get ready to play again un Sunday.”

Wofford enters the game with a 4-2 record with a North Greenville victory (70-59) on Wednesday. Jackson Paveletzke had 18 points and six assists, while B. J. Mack added 10 points. Wofford out rebounded North Greenville, 38-17, and shot 48.0 percent from the field.

This will be the second meeting between the two teams with LSU a 91-69 winner over Wofford in the 2016-17 season.

LSU forward KJ Williams and guard Adam Miller were both named all-tournament for the Cayman Islands Classic. Williams in his three games averaged 23.0 points and 7.7 rebounds with six steals. He made 27-of-45 field goals (60 percent) with three treys and 12-of-14 from the free throw line. Miller made eight treys in averaging 15.7 points per game and 2.0 assists. Miller was 15-of-36 from the field and 9-of-10 from the free throw line.

Justice Hill was also in double figures with a 10.0 points per game average and 3.3 assists per game.

The Tigers will also be home on Friday, facing UT-Arlington at 7 p.m. at the Maravich Center.