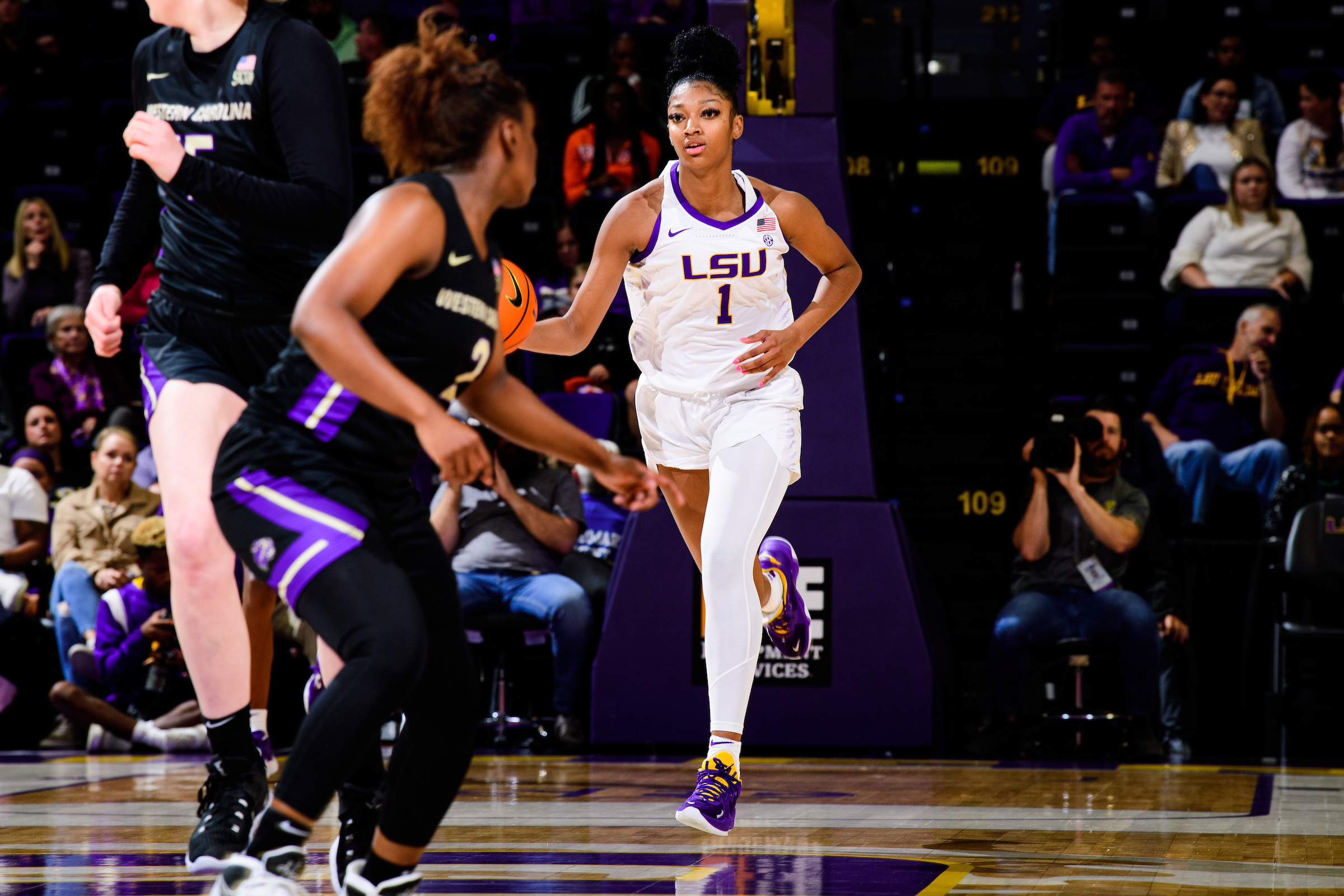 BIMINI, Bahamas — The LSU Women’s Basketball show took to the road Thursday as the No. 12 Tigers (6-0) took down George Mason (3-4), 80-52 in its first game of the Goombay Splash in The Bimini, Bahamas.

Angel Reese led the tigers with 21 points and 19 rebounds as she secured her sixth consecutive double-double to start her LSU career. She’s had at least 15 rebounds in each of the past five games and has had a career-high 19 in two straight. Freshman forward Sa’Myah Smith came off the bench and had a career-high 14 points and forward LaDazhia Williams scored 13 as LSU’s posts were dominant.

“We wanted to get the ball inside early and we did,” said LSU coach Kim Mulkey. “I’ve got to go back and watch film and ask if we did not get the ball in there in the second half.”

With the win, LSU will match up against UAB on Saturday at 1 p.m. CT. That game will also stream on FloHoops. UAB and George Mason will play Friday afternoon.

Alexis Morris finished with 13 points and freshman Flau’jae Johnson had 10 as she has still scored in double figures every game of her college career thus far.

LSU’s streak of consecutive games came to an end on Thursday at five games as the Tigers were unable to reach the century mark. At least one NCAA DI team had a streak of six straight 100-point games and it was the 1981-82 Louisiana Tech team that Mulkey was a player on.

The Patriots were led by Sonia Smith with 15 and Taylor Jameson with 11. Thirty of George Mason’s 66 field goal attempts came from behind the arc, but the Patriots shot just 20-percent from downtown.

LSU showcased its talent in the first half, jumping out to a quick and explosive lead. But George Mason responded in the second half, scoring 33 points over the final two quarters.

“We forced a lot of missed shots (in the first half),” said Coach Mulkey. “We gave them one opportunity in the first and we got out and we ran. We didn’t do that in the second half and their defense didn’t change.

The Tigers started the game on an early 8-0 run and half of those points came from the free throw line as Reese and Johnson both started 2-2 at the stripe. Through the first five minutes of the game, Reese tallied 6 points and 6 rebounds, looking for her sixth consecutive double-double. Reese finished the quarter with 10 points and 8 rebounds as the Tigers ended the quarter with a 27-9 lead.

Just four minutes into the second quarter Reese picked up her tenth rebound and secured her sixth double-double through six games as a Tiger. LSU ended the quarter on a 10-1 run to put the Tigers up by 29 before the half, 48-19. Morris scored 10 in the first half.

After a slow start to the third quarter LSU extended its lead to 34 points. Both teams found themselves at the line as there were a combined 11 personal fouls committed in the third. George Mason went 4-4 and LSU went 7-8. LSU gave up 18 in the third and headed into the final quarter with a 71-37 lead.

George Mason refused to go quietly though as the Patriots fought hard in the fourth quarter, making it difficult for the Tigers to score and rebounding relentlessly on both sides of the ball. LSU held strong though for their sixth consecutive win out of the gates.

“Fatigue set in,” Coach Mulkey explained. “We’ve got to get in better shape. We didn’t defend good in the second half and didn’t rebound hard and I think George Mason had just a little toughness about them in the fourth quarter.”