Adam Miller, seen here from earlier in the season, had 23 points with five treys to lead the Tigers. 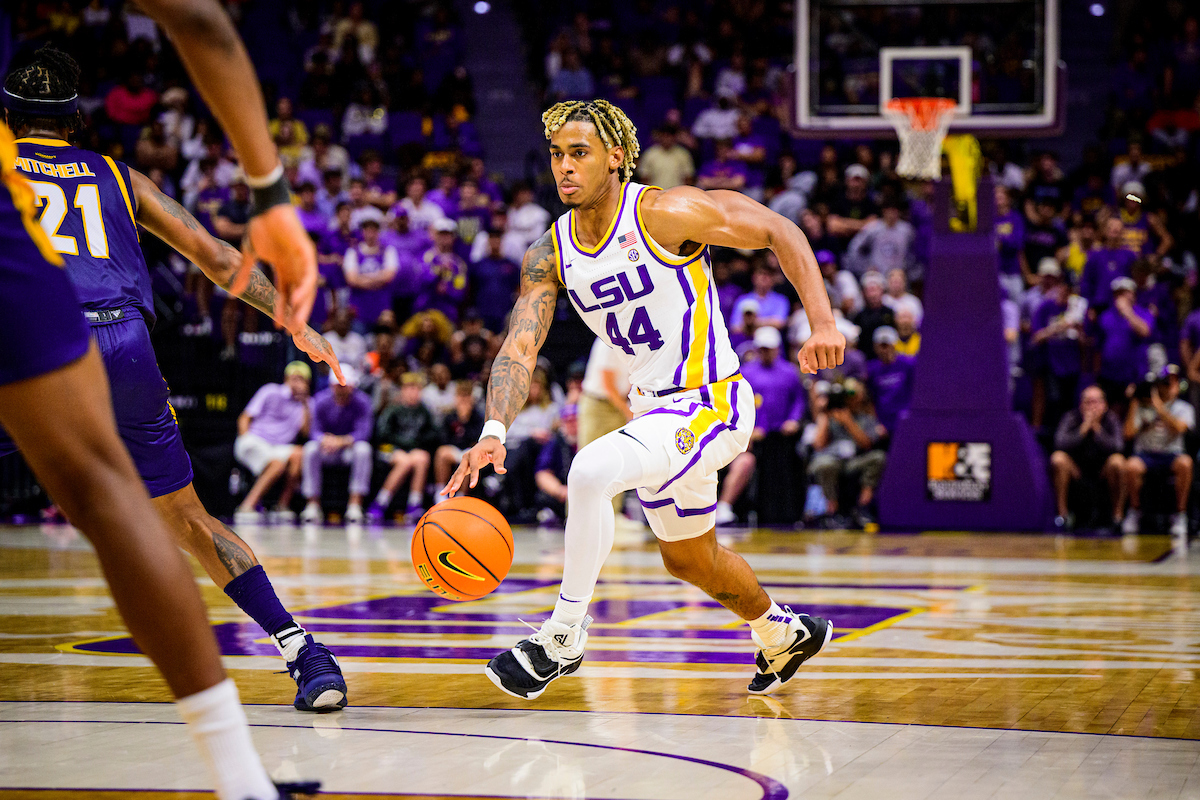 GEORGE TOWN, Grand Cayman – The LSU Tigers will play for a championship in a multi-team event for the second consecutive year as they advanced to the finals Tuesday of the Cayman Islands Championship with a 73-58 win over Akron at John Gray Gymnasium.

The Tigers are now 5-0 on the season and will play Kansas State, a 96-87 overtime winner over Nevada, for the championship at 6:30 p.m. CT on Wednesday.

Offensively and defensively the Tigers had moments that stood out in the contest against the Zips, now 3-2. Defensively, LSU held Akron to just 25.9 percent field goal shooting for the game (14-of-54) and a strong 20 percent in the final 20 minutes as the Zips made just 5-of-25 overall, 2-of-16 from inside the arc.

The defensive effort proved pivotal at a point in the first half when Akron was able to outscore LSU 12-3 to reverse a 22-21 LSU lead into a 33-25 Tiger deficit with 4:21 to go in the first half. Coach Matt McMahon called time out to try to get things organized but Akron had a chance to go up double figures after an LSU miss and a Tiger foul.

Xavier Castaneda, who would make 12-of-16 free throws in leading the Zips with 28 points, however, would miss the front end of a one-and-one and Adam Miller would score on the other end to cut the Akron lead to six. On the ensuing possession, after an LSU miss, KJ Williams would score to make it 33-29 in favor of Akron.

The Zips missed again and Cam Hayes was fouled in the process of shooting a three-pointer and made two-of-three to cut the lead to 33-31. The Tigers went to the halftime break, energized, and down just those two points, 35-33, at the break.

It took LSU all of 22 seconds of the opening possession to tie the game in the second half as Justice Hill hit a driving layup to tie the game. Akron turned the ball over and KJ Williams after an offensive board, scored to give LSU the lead again at 37-35.

Sammy Hunter hit a three-pointer for Akron to give them a 38-37 advantage, but when Miller’s jumper at the 18:16 mark went in to give LSU back the lead at 39-38, the Tigers would never trail again.

LSU’s offense rolled from several different points in the second half when LSU shot 57.1 percent from the floor (16-of-28) and 4-of-10 from the arc. Miller had 15 second half points (making 6-of-9 field goals including three three-pointers), while KJ Williams had 12 points in the final 20 minutes (4-of-8 from the field with a trey) and Hill had eight points, three assists and no turnovers.

Also, Trae Hannibal played 17 minutes and Derek Fountain 15-plus minutes in helping lead LSU back from their first halftime deficit of the young season.

The Tigers gradually worked the lead to nine points with 10:07 to go, 53-44, on a KJ Williams turnaround and pushed the lead to double figures for the first time on a Miller bucket with 9:12 to go. Akron made a brief run but could get no closer than the six rest of the way as LSU enjoyed a double figure lead over the final five minutes.

“I am really excited about the progress of our team,” said Coach McMahon. “We held them (Akron) to 31 percent from the floor in the first half. Then in the second half we held them to 20 percent from the floor. I thought our effort was tremendous. The guys did a great job of executing down the stretch. Our guys made the plays to be able to close out the game.”

Miller would finish with 23 points off five treys with KJ Williams, followed his 33 points on Monday with 19 on Tuesday and Justice Hill had 14 points, three assists and no turnovers in 26 minutes.

“With every great team. you want to have great inside and outside balance,” said Coach McMahon. “We wanted to be able to pound the ball into the post to KJ and we wanted to be able to run Adam off of screens. He doesn’t need much time or space to get his shots off. I thought our guys did a great job of screening. I thought Justice Hill did a great job of running our team from the point guard position. He made some great decisions. We had terrific point guard play.”

LSU had a season low 10 turnovers and forced 14 by the Zips. The Tigers were out rebounded 36-31 in the game and Akron had 19 offensive rebounds to extend possessions.

Along with Castaneda, who also had four treys and four assists, Sammy Hunter had 13 points. Enrique Freeman, held to just three points, had 10 rebounds for the Zips.

Last year, LSU defeated Penn State and Wake Forest to win the Emerald Coach Classic Tournament in Niceville, Florida. The Tigers will be trying to win an eight-team MTE outside of Baton Rouge since the Tigers defeated three teams to win the Hawaii Pacific Classic in Honolulu in 1999.

The Voice of the Tigers Chris Blair and Coach John Brady will have the call of the championship game on the affiliates of the LSU Sports Radio Network (Guaranty Media flagship affiliate Eagle 98.1 FM in Baton Rouge). The contest will be streamed by FloHoops.