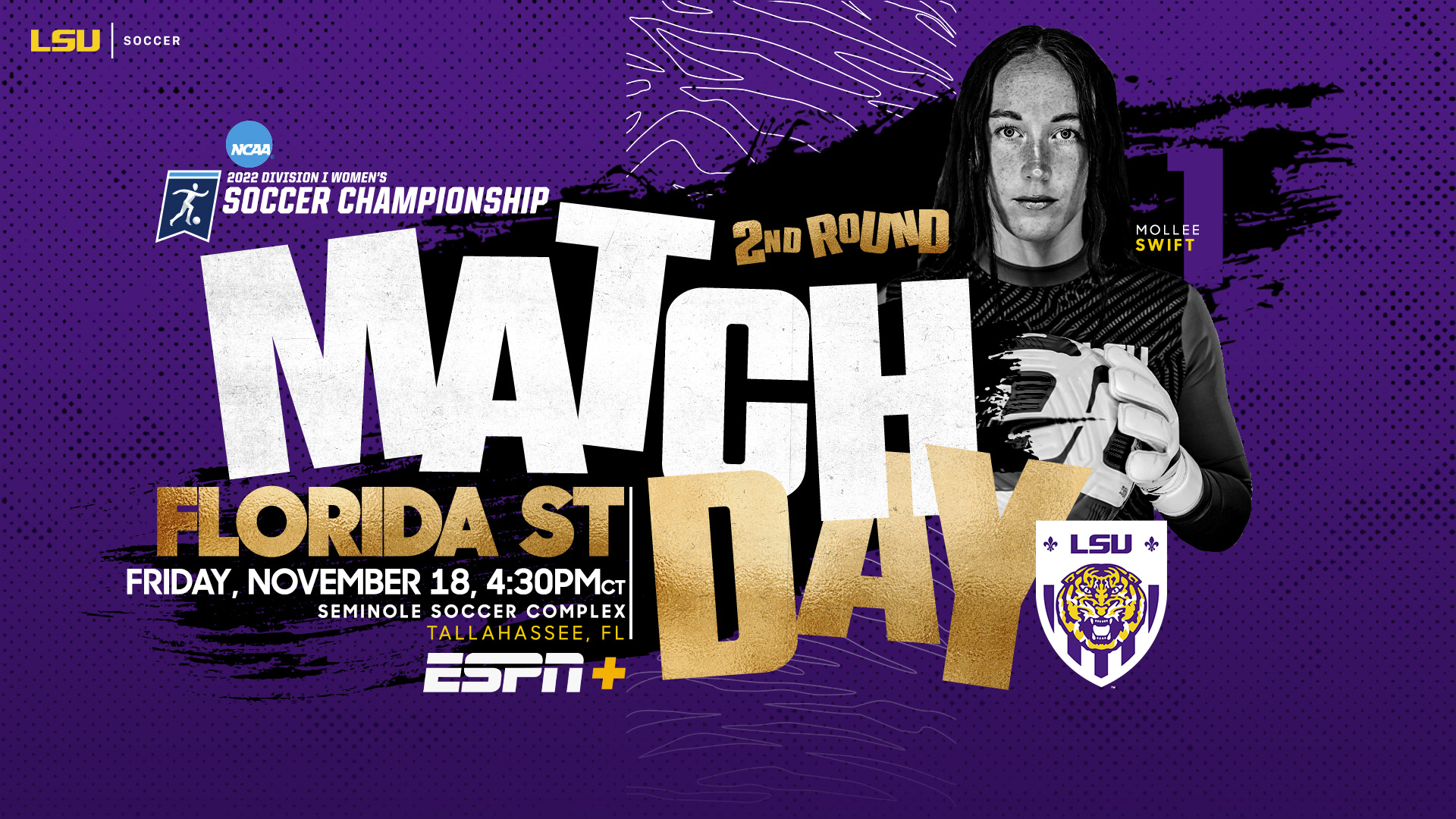 LSU holds a 1-2-1 record in the series history against the Seminoles, earning its sole win against Florida State in the regular season in a 3-1 in 2002. When the teams last met in 2007, FSU knocked the Tigers out of the second round in the NCAA Tournament in Tallahassee, 4-0.

The 2022 Division I Women’s Soccer Tournament kicked off the first round of matches on November 11. LSU took down Lamar in the first round to advance to the second round and is set to face the region’s top-seeded Florida State.

Second and third round matches will be conducted at eight non-predetermined campus sites. At each campus site, four teams will compete in a single-elimination second-round competition. The two winning teams will then compete against each other in a single-elimination third-round competition at the same campus site. The winning team from each of the eight third rounds advanced to the quarterfinals.

Quarterfinals are set to take place on November 25 or 26 and the final four teams standing will participate in the Women’s College Cup on Dec. 2 and 5 at WakeMed Soccer Park in Cary, North Carolina.

The Tigers recorded three draws against ranked opponents this season, the first of which came on the road in non-conference play at No. 14 Pepperdine. LSU also battled to a draw against No. 16 Tennessee and No. 9 Arkansas to earn back-to-back shutouts on the road in conference play.

The Tigers first round win over Lamar marked the first victory in the NCAA Tournament under head coach Sian Hudson. She will look to earn her second victory in the tournament against the Seminoles on Friday evening.

The eighth seeded-LSU Tigers picked up their first NCAA Tournament win under head coach Sian Hudson last Friday night in a 3-1 victory over Lamar at the LSU Soccer Stadium.

After battling in the midfield throughout the first half, LSU found the back of the net in the 32nd minute. Forward Angelina Thoreson sent a through ball down the right flank to Mollie Baker. Baker picked up the ball and outpaced her defender before charging into the box and sending a ground cross across goal to Hermannsdottir, who footed it into the back of an open net.

Hermannsdottir’s goal was a team-high seventh of the season for the freshman, who missed LSU’s last two matches due to an injury. For the creators, Baker tallied assist number six on the season while team assist-leader Thoreson was credited with her eighth of the year.

Momentum swung LSU’s way and the Tigers did not look back the rest of the way. In the 40th minute, forward Taylor Dobles was fouled in the box by a Cardinal defender and the referee pointed to the penalty spot. Swift ran across the field and grabbed the ball before stepping up to the penalty spot. The LSU goalkeeper sent a powerful shot to the left corner to beat Ellis, who guessed the right way, to give the Tigers a 2-0 lead.

The goal is Swift’s first of the season and her second of her career after scoring a penalty kick at Kentucky last season.

The goal was the final major event of the first half and the Tigers went into the halftime break up by two. The lead became 3-0 in the 64th minute as defender Olivia Wilkes sent a perfect cross on a free kick from just outside the box to Brenna McPartlan, whose header bounced under the crossbar and into the goal. McPartlan’s goal was her second of the season while Wilkes’ assist was her first as a Tiger.

Against the run of play, Lamar grabbed a goal in the 81st minute. Kitaru disposed of a Tiger defender in midfield and broke away through on goal. She found herself in a one-on-one with Swift and slotted home a ground shot from 15 yards out past the onrushing goalkeeper and into the back of the net.

In the final seconds of the match, Lamar was awarded a penalty after a foul in the box. Kitaru stepped up for Lamar to take the penalty, but her shot to the right side of the goal was saved by a diving Swift to keep the match at 3-1 as time expired. The save was Swift’s third and final of the night.

LSU outshot Lamar by a margin of 22-6, with the Tigers having 13 shots on goal compared to the Card

Freshman Ida Hermannsdottir and fifth-year senior Alesia Garcia have led the way in goals for the Tigers this season. Hermannsdottir currently leads the team with seven goals while Garcia follows with five.

Mollie Baker and Sage Glover both narrowly trail the top scorers with four on the year.

Of LSU’s 40 goals scored this season, 14 have come from true freshmen (35%) while 21 goals have come from seniors/graduate students (52.5%) . The Tigers have 16 different goal scorers and have shown strong depth in the scoring department by scoring two or more goals in 14 contests this season.

Freshman Angelina Thoreson leads the squad with eight assists. The forward has proven to be a weapon on both sides of the ball and continues to create scoring opportunities for the Tigers.

Senior Mollee Swift leads the SEC this season with 73 saves on the year as well as leading the conference with 4.06 saves per game.

The Papillion, Nebraska native has been vital in her three years in Baton Rouge. She has made 63 appearances, starting in 54 of those, and posted 228 saves as a Tiger.

She currently ranks 4th all-time in the program’s career save category, trailing third place by only seven saves (Mo Isam, 235). Additionally, her 1.21 Goals Against Average places her fourth on LSU’s all-time list.

Co-captain Lindsi Jennings has started in all 19 matches as a fifth-year senior for the Tigers and has been a force in the backline. The Texas native has tallied two goals, one assist, two shots on goal, and five points on the pitch this season.

Wasila Diwura-Soale, a native of Accra, Ghana, is a consistent piece to both the Tigers offense and defense as she holds down the midfield position. She has tallied three goals, three shots on goal, and six points through all 17 of her starts this year.

Ida Hermannsdottir has led the way in goals this season with six. As a freshman, the Reykjavik, Iceland, native has earned the start in 14 out of the Tigers 18 matches and recorded six goals, two assists, 13 shots on goal and 14 points. She ranks eleventh in the country in goals scored.