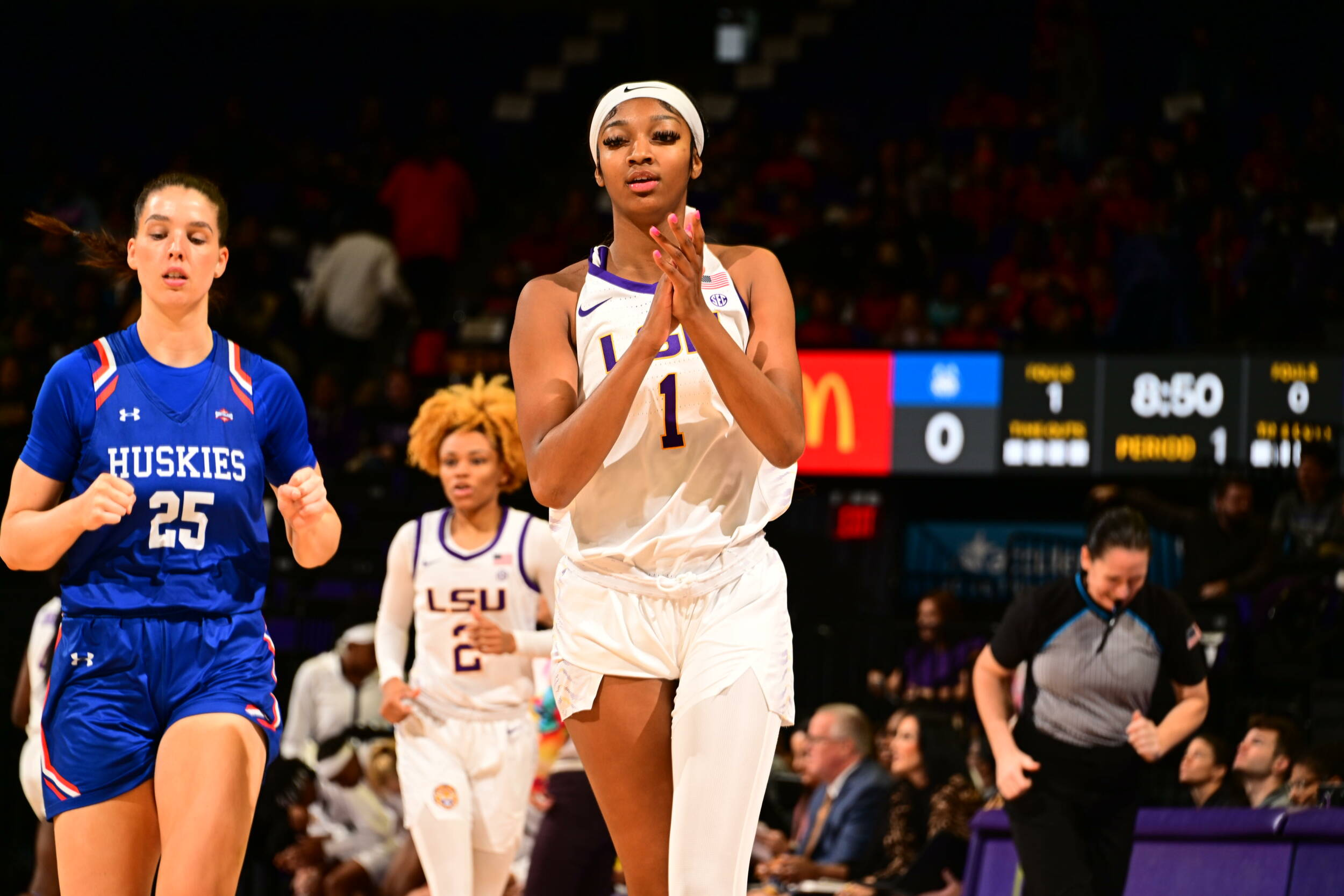 BATON ROUGE — No. 15 LSU (4-0) defeated Houston Christian (1-2) on Wednesday as the Tigers scored 100 points for the fourth game in a row and rolled past the Huskies in a 101-47 victory to remain undefeated in front of a packed house of 12,498 for LSU’s annual field trip game.

It is the first time in LSU history the Tigers have scored 100+ in four consecutive games.

LSU will be back in action on Sunday afternoon at the PMAC as it takes on Northwestern State at 2:00 p.m. CT on SECN+. The Tigers will be celebrating 50 years in women’s sports during Sunday’s contest.

SEC Co-player of the week, Angel Reese, scored 29 points and 16 rebounds in her fourth straight double-double to begin the season. The last LSU player with four in a row was Ayana Mitchell in the 2019-2020 season. It was also Reese’s third 15 rebound game in a row.

Sharpshooter Jasmine Carson, went 3-4 from behind the arc and finished with 13 points. All three of LSU’s other starters – Alexis Morris (12), Flau’jae Johnson (12) and LaDazhia Williams (12) – finished in double figures.

“When I make shots early on, it does build my confidence,” Carson explained. “It’s like I’m on fire; so shooters shoot. When I got off to a hot start it made me have more energy to play defense on the defensive end because I don’t just want to be a one-way player. I want to be a two-way player on the defensive end too so when I was knocking down shots it gave me another boost of energy to get a stop on the other end.”

HCU, last season’s Southland Conference regular season champion, was led by Julijia Vujakovic with 18 points and 4 three-pointers. Vujakovic was the only Husky to score in double figures.  HCU had 8 three-pointers and went 9-10 from the FT line.

The Tigers had their best three-point shooting game of the season as they shot 60-percent from behind the arc. LSU shot 53.9% from the field, compared to HCU’s 25.4-percent. The Tigers dominated the glass out rebounding the Huskies 53-28. LSU scored 33 points off turnovers and 54 points in the paint.

HCU, formerly Houston Baptist, kept things close in the first quarter, but LSU got rolling in the second quarter and continued to play better as the game went along.

The Tigers started the game on a 15-2 run through the first five minutes of the contest. Carson and Reese led LSU as Carson hit two deep threes early and Reese was dominant off the glass. HCU responded though, hitting 3 three-pointers late in the quarter to ultimately cut LSU’s lead to 22-20 at the end of the opening quarter.

“We responded and I thought we responded in a way that we learned,” Coach Mulkey said. “You learn every time you get on that floor.”

LSU regained its momentum as the Tigers dominated the second quarter on a 24-0 run and forced eight turnovers on defense. LSU held HCU scoreless until the final minute of the quarter when the Huskies scored 5 points in their final two possessions before the break.

LSU led HCU at the half as a big second quarter boosted the Tigers to a 21 point lead. Reese led the team with 13 points and six rebounds. Carson went 3-4 from behind the arc and finished the half with 11 points. Morris made an impact as she had 5 assists and 3 steals through the first two quarters.

Reese secured her second 20-point game of the season with three minutes left in the third quarter. LSU started to pull away in the last couple of minutes as the PMAC erupted from a Reese block that led to a Kateri Poole finish on the other end. The Tigers headed into the final quarter leading 71-37.

Reese went on to secure her fourth straight double-double to begin the season two minutes into the fourth. Morris forced an HCU timeout on her second trey of the game  as she pushed the Tigers to a 40-point lead. The Tigers secured their 4th straight 100-point game of the season with 20 seconds left in the contest.