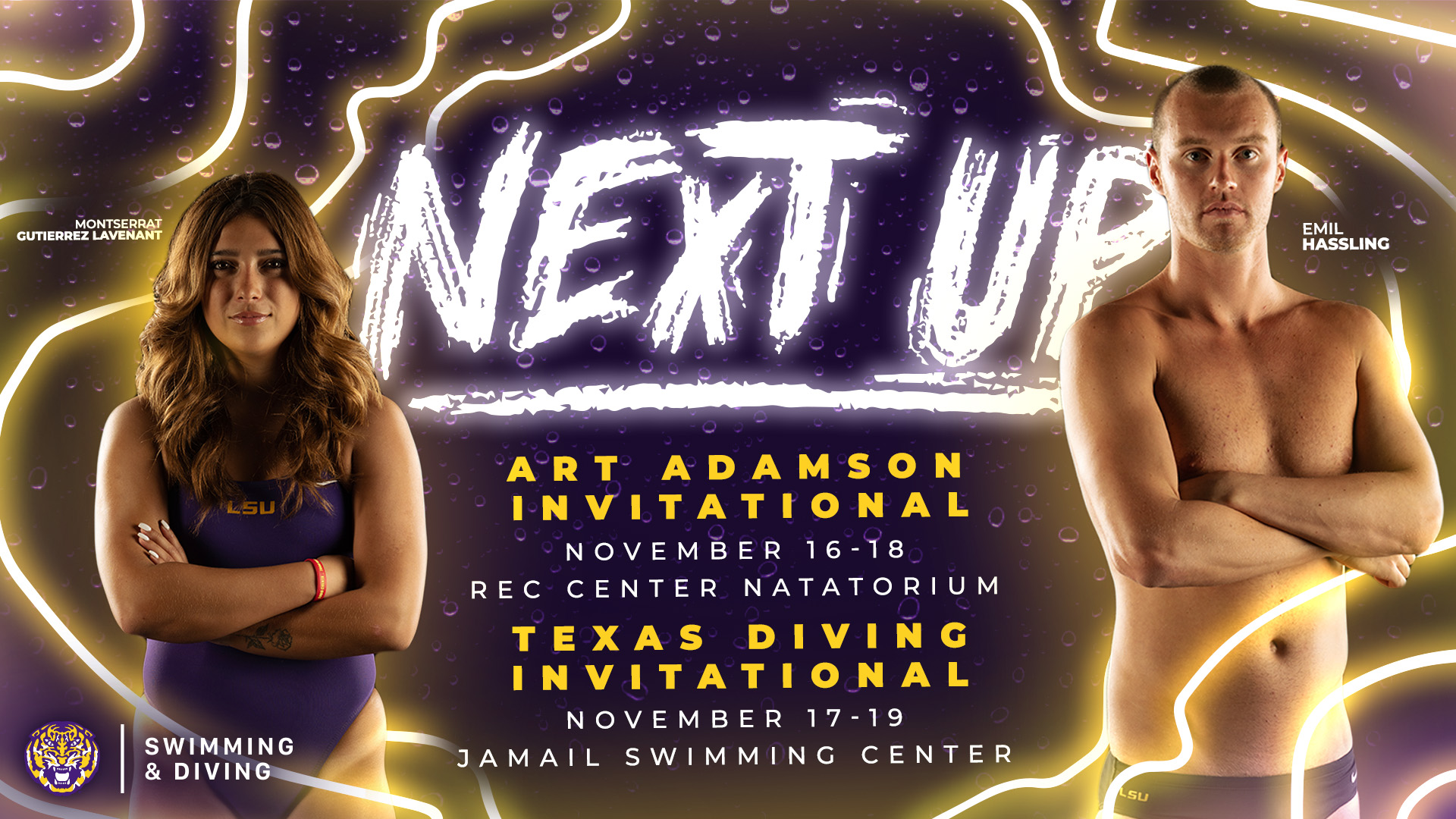 BATON ROUGE, La. – The LSU swimming and diving teams are headed to their separate midseason invites after a highly-competitive first half of the season. Swimming is set to compete in the Art Adamson Invitational inside the Rec Center Natatorium and diving goes to the Texas Diving Invitational at the Jamail Swimming Center.

LSU swimming begins in Bryan-College Station on Wednesday at 9:30 a.m. CT and the meet concludes on Friday, November 18. For the Texas Diving Invitational, individual performances start at 10:00 a.m. CT Thursday with men’s one-meter and women’s three-meter.

Live stats for the Art Adamson can be found on the MeetMobile app. The diving invite can be viewed on the Longhorn Network or streamed on the ESPN app.

“This is going to be a great opportunity for our divers,” head diving coach Drew Livingston said. “The Texas Diving Invitational is the premier invite in the country with some of the best programs in the NCAA. We have a long way to go this season, but this is going to be an excellent measuring stick for our athletes. We’re looking forward to some great competition and performances in Austin.”

LSU started their winning ways in the 200-yard freestyle with Reagan Osborne and Brooks Curry winning. Osborne touched the wall first with a time of 1:49.08, and Curry did the same with a time of 1:35.41. Curry’s time in the event broke the pool record, previously set by Jayme Cramer of Louisiana’s local club team, Crawfish Aquatics.

Freshmen Stuart Higdon and Pawel Uryniuk came up huge down the stretch with wins in the 500-yard free and 100-yard fly. Higdon finished with a time of 4:26.19 and Uryniuk touched the wall first with a time of 47.83.

Higdon, who has been an impressive distance swimmer for the Tigers, also clocked in the sixth-best time in LSU history for the 1000-yard free. He finished second with a time of 9:15.36 and surpassed Keagan Finley’s time from 2018.

The Tigers closed the high-intensity meet with the 400-yard free relay. The women had a strong back half closing out the win with a team of Osborne, MacNeil, Katarina Milutinovich and Michaela de Villiers. Their official time was 3:18.57.

The men nearly matched the women but fell short by 27 hundredths of a second.

On the diving side, the LSU squad continues to dominate the competition with wins in each event Friday. For the women, Chiara Pellacani, snagged both first-place spots on one-meter and three-meter with respective scores of 311.25 and 350.85.

On three-meter, Helle Tuxen finished in second place with a score of 324.38, and on one meter, LSU took the top-4 spots. Montserrat Gutierrez Lavenant claimed second, Tuxen third, and Maggie Buckley rounded it out in fourth.