LSU Athletics on Monday night held “Greater Because of Her" in the Maravich Center, commemorating the 50th Anniversary of Title IX. The event, featuring NBC Sports anchor Maria Taylor as keynote speaker, honored the trailblazers of women's athletics at LSU and educated the community on the history and impact of the past five decades. 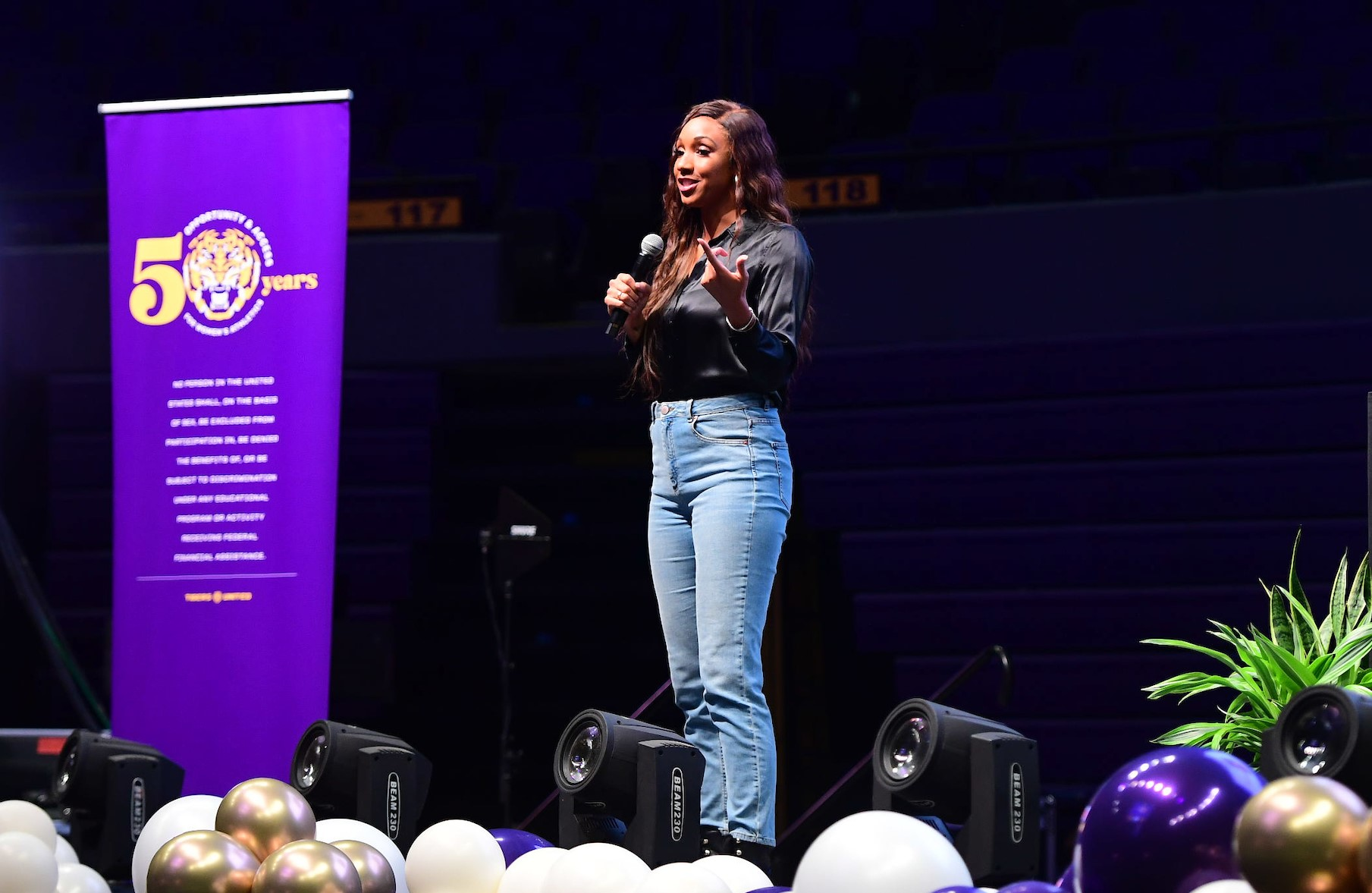 BATON ROUGE, La. – LSU Athletics on Monday night held a special event, “Greater Because of Her,” in the Pete Maravich Center, commemorating the 50th Anniversary of Title IX.

The event culminated LSU Athletics’ yearlong celebration of 50 years of women’s varsity sports by honoring its trailblazers and educating current student-athletes and the community on the history and impact of the past five decades.

“Greater Because of Her” featured a keynote address by NBC Sports anchor Maria Taylor, a former All-SEC volleyball player and basketball player at the University of Georgia.

The evening was also highlighted by a “Walk of Women,” acknowledging some of the most influential women in LSU’s academic and athletics history, and the announcement of the creation of the Sue Gunter Impact Award, named in honor of the legendary former LSU and U.S. Olympic women’s basketball coach.

The Sue Gunter Impact Award will recognize each year at LSU a person who has made a dramatic and lasting impact, contributing to the advancement of women and the growth of women’s athletics.

During Monday night’s festivities, Director of Athletics Scott Woodward paid triubute to the former student-athletes who paved the way for women currently competing in varsity sports at LSU.

Woodward noted that the first official letter award records on file at LSU begin following the 1977-1978 academic year; however, over 100 women had participated in athletics at LSU prior to the ’77-78 season. Those women who had previously gone unrecognized for their athletics exploits were granted Honorary Letter Awards on Monday night.

“By honoring the past and learning from the incredible women who have competed and contributed as Tigers,” Woodward expressed to the honorees, “we will ensure your legacy extends into the next 50 years of transformation on our campus and in our community.”

“Greater Because of Her was such an impactful and exciting event!” said Leighann Westfall, LSU Athletics’ Executive Director of External Relations and Letterwinner Engagement. “I felt privileged to be a part of the celebration and to see so many LSU women trailblazers in one room. Through my role with the L Club, I have had the opportunity to speak to many of the women that were recognized at the event; the stories of their time at LSU competing as a Tiger truly inspired me and our entire Athletics Department.

“With the celebration of 50 years of Title IX, we knew it was the perfect moment to commemorate the women that should have been recognized back then. Granting these women letter status and welcoming them to the L Club was an honor!”

Former LSU women’s basketball player Joan Landry was one of the grateful Tigers to receive the Honorary Letter Award on Monday night.

“It meant so much to the women who played basketball from 1972-76 without any recognition due to the time it was in women’s athletics,” Landry said. “We’ve come a long way, and I look forward to continue to support our university and athletics for many years to come!”

Following are the women that were presented with the LSU Athletics Honorary Letter Award:

The one-hour show, hosted by Bill Franques and produced by Jeff Palermo, is a weekly production containing football game recaps and interviews with LSU personalities. The show airs on Sundays in the fall, and it may be heard statewide on affiliates of the LSU Sports Radio Network, including Talk 107.3 FM in Baton Rouge.
LSU, NCAA Boxing Champion Crowe Peele Passes Away At Age 88