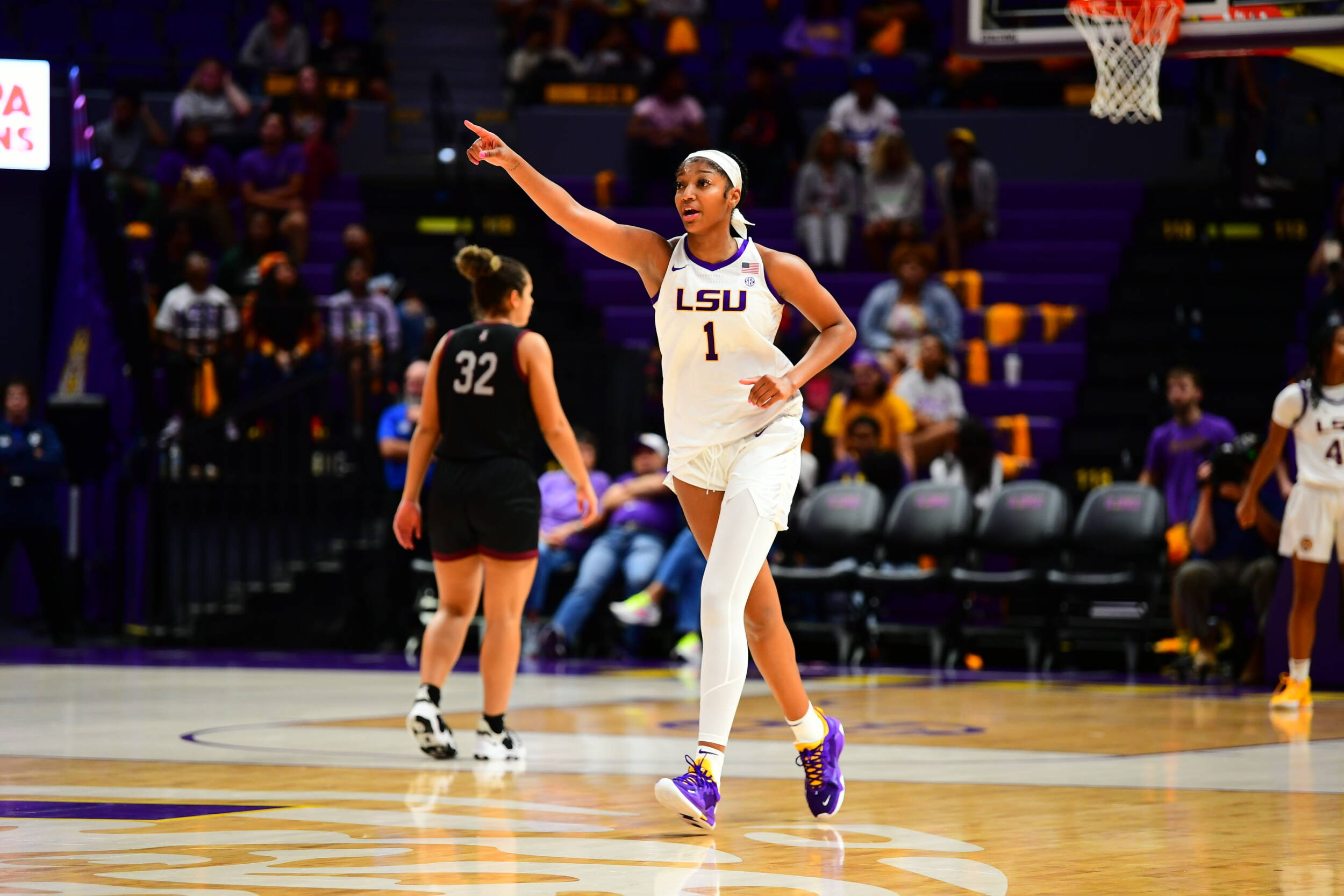 BATON ROUGE — No. 14 LSU put on a show in its women’s basketball season opener Monday night in the PMAC, setting a program record for points in a game with a 125-50 victory over Bellarmine.

LSU also set a program record with 44 made free-throws – four shy of a NCAA record. The Tigers’ victory margin of 75 was one shy from tying a program record. This is the second time a Coach Kim Mulkey team has scored 100+ points during her time at LSU as the Tigers had a 100-36 victory over Alcorn State during her first year in Baton Rouge.

Coach Mulkey’s team got off to a hot start for her second season in Baton Rouge as multiple newcomers had big-time performances. Angel Reese, the highly touted transfer from Maryland, stacked the sheet with a career-high 31 points on 11-14 shooting, 13 rebounds (5 offensive), 4 steals, 2 assists and 2 blocks.

“I’ll never take her for granted with her skills,” Coach Mulkey said of Reese. “I’ve told her many times, and I tell everyone else she’s a beast on the boards, and I say that in the most complimentary of ways.”

“I was really excited, and I felt really confident going into the game,” Reese said. “I let the game come to me.”

Freshman Sa’Myah Smith had a double-double in her LSU debut, posting 12 points and 11 rebounds (6 offensive). Other players that had double-figures in their LSU debut included transfer Jasmine Carson (17), Flau’jae Johnson (14) and Kateri Poole (14).

Coach Mulkey improved to 22-1 in season openers, winning each debut since the 2004-05 season when her team fell to LSU

The Knights were led by Hayley Harrison who finished with 3 three-pointers and 19 points total. Harrison was the only player from Bellarmine to score in double figures.

The Tigers went 44-57 from the line, shattering the free-throw record as they scored over a third of their points off free throws. LSU out rebounded Bellarmine 56-28, and capitalized off the offensive glass, scoring 20 second chance points.

The Tigers will be back at the Pete Maravich Assembly Center for Military Appreciation Night on Thursday as the Tigers take on Mississippi Valley State at 7:00 p.m. CT. The game will be streamed on SECN+.

Fan got an immediate glimpse of what the future holds with Reese as she scored 10 of LSU’s first 17 points. The Tigers then went on a 20-2 run that was supported by the defense causing multiple shot clock violations. LSU ended the quarter  with a 23 point lead.

Morris started the second quarter by draining a corner three as she fell backwards onto the floor. LSU continued with a 15-0 run that saw another trey from Morris and 5 more points from Reese. The Tigers ended the quarter shooting 8-9 from the field and finished 2-2 from behind the arc.

LSU ended the half shooting 60-percent from the field and 72-percent from three, compared to Bellarmine’s 22-percent and 38-percent. The Tigers scored 28 points off 18 turnovers and scored 30 points in the paint in the first two quarters.

It was just under a minute into the third quarter when Reese got her tenth rebound of the night to secure the double-double. Johnson led the team in the third quarter with 7 points. LSU scored 21 of its 27 quarter points from the free throw line.

Smith earned her double-double in the fourth quarter as she made two free throws to break the record free-throw record. Reese pushed the Tigers past the century mark as she sunk two more free throws and broke the 30 points in her first game. With three minutes to go a Kateri Poole lay-up broke the record of most points scored in a game, going past the previous record of 118.