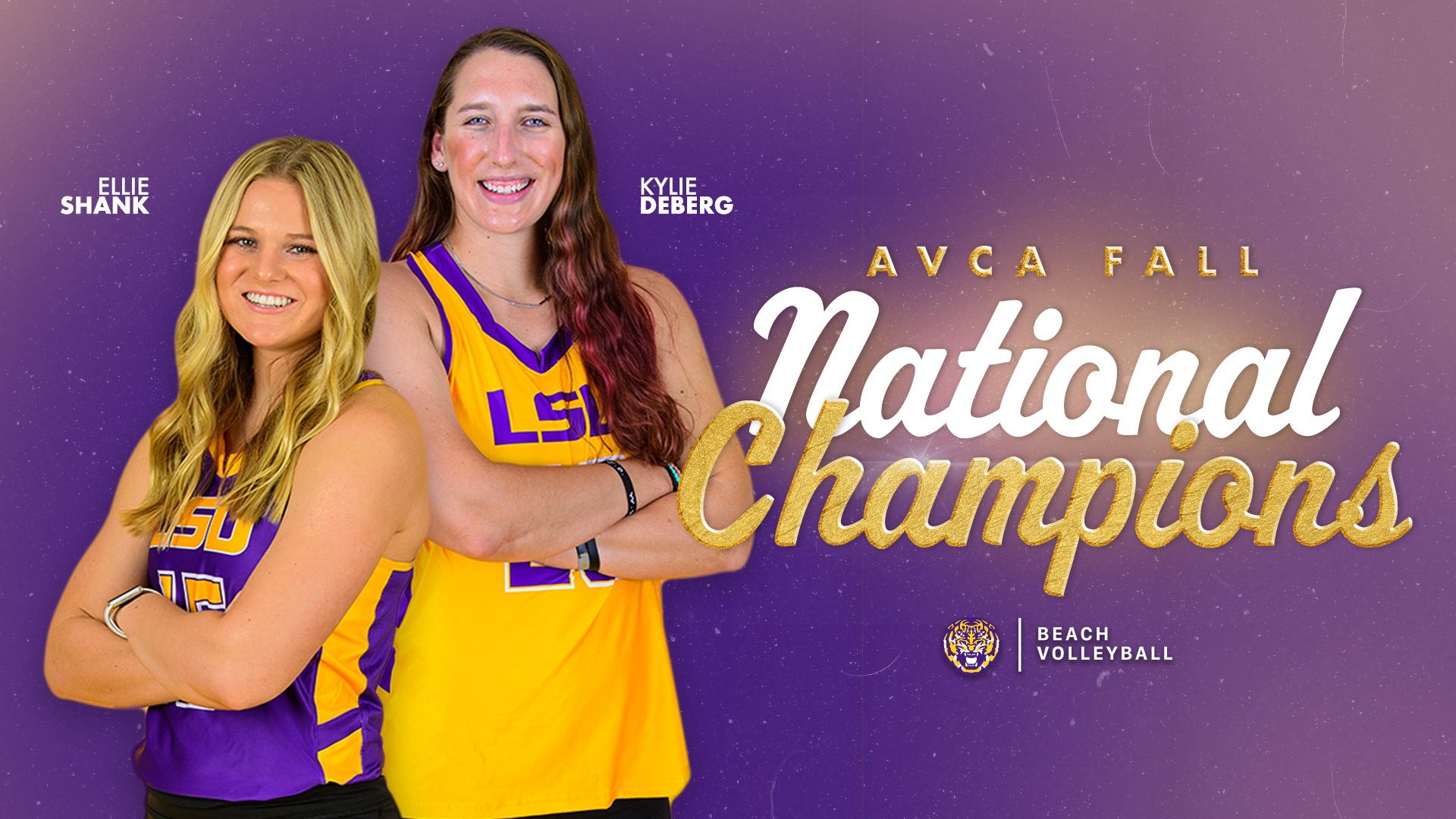 Huntsville, Alabama – LSU Beach Volleyball’s Kylie Deberg and Ellie Shank claimed the first ever Fall AVCA Pairs National Championship over the weekend in Huntsville, Alabama, proving to be the best pair in the nation, competing in a field with 64 invitation-only pairs from some of the top programs in the country.

USA Volleyball and the AVCA used to hold a pairs championship in the spring following the NCAA Team Championship which was the most recent version of a college beach pairs national championship. LSU’s Kristen Nuss and Claire Coppola won the USAV Collegiate Beach Championship in 2018 and 2019 – the last two years it took place. Now a LSU pair has claimed the first ever AVCA Fall Pairs Championship.

“We’ve been fortunate as a program to be involved in some significant events for our sport,” said Brock. “To be the winner of the first Fall AVCA beach pairs championship is something that can’t ever happen again so having Kylie and Ellie represent LSU in that spot is a great honor. It’s also fun to see this come full circle as the last time the AVCA partnered with collegiate beach volleyball to host a Pairs championship Claire and Kristen won it in back-to-back years. So, to have Kylie and Ellie join them in that success on a similar stage once again is a proud moment for our program.”

Deberg and Shank swept through pool play against pairs from Central Arkansas, Morehead State and UC Davis to advance to the Champions Bracket. The LSU duo continued to have success in the sand, sweeping matches against FGCU’s Dylan Brewer and Kacie Johnson and South Carolina’s Skylar Allen and Simone Priebe. On their way to the finals, they swept the No. 6 seeded pair of Angelina Ferary and Bella Ferary from Georgia State (21-13, 21-19) and the No. 10 seed of Allison Hansen and Abbie Hughes from Grand Canyon (21-17, 21-12).

In the championship they faced the No. 8 seed in TCU’s Sutton Mactavish and Ana Vergara. Deberg and Shank won the first set, 21-14, before dropping the second set, 19-21 – their first dropped set of the whole weekend. With the national championship on the line, Deberg and Shank took the third set, 15-11.

“I’m so proud of both of these pairs,” said coach Brock. “Any time you can compete in an event that is loaded with talent from around the country where the top programs had the chance to send their top pairs to win a National Championship, and you significantly exceed the seeded expectations it’s an incredibly important opportunity. The focus, effort and execution it took to be successful at this national championship event was impressive.”