"Greater Because of Her" - Seimone Augustus left a legacy so profound that, as the most decorated female student-athlete in LSU history, it will be cemented forever outside the Pete Maravich Assembly Center. 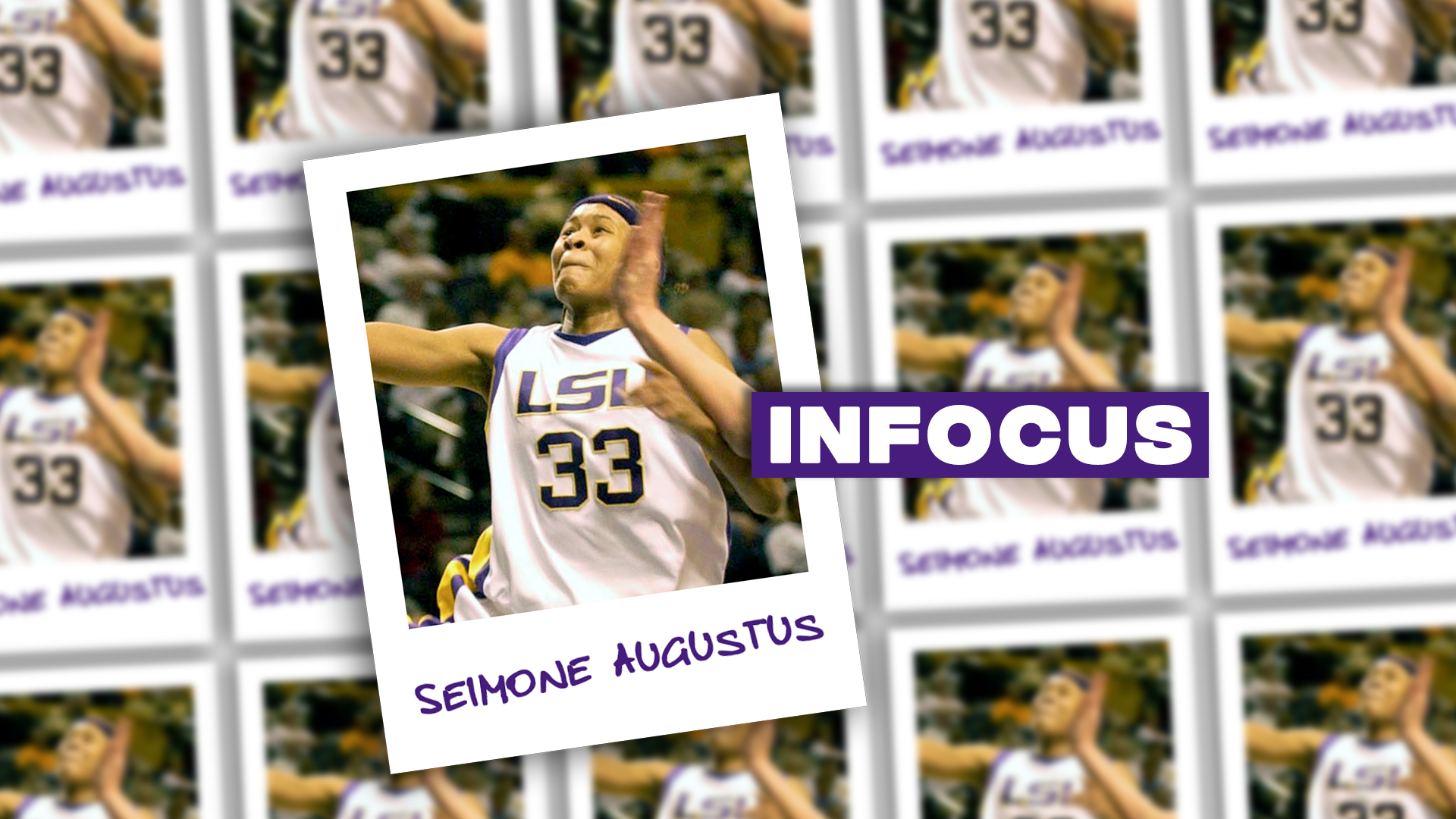 A legacy so profound that, as the most decorated female student-athlete in LSU history, it will be cemented forever outside the Pete Maravich Assembly Center.

There are words you can use to describe Augustus’ impact – on basketball, on LSU, on her teammates and in the community. There are banners and medals, too. The statue that will be unveiled this season is proof that, most of all, her legacy is permanent.

As the bearer of many “firsts” during her career in Baton Rouge, the mark Augustus leaves on LSU Athletics, celebrating 50 Years of Women in Sports, transcends any accolade, banner, statue or amount of points.

There’s only one Mone.

“To be able to come back and feel welcomed, and to be able to pass on knowledge or the wisdom that you have to the players that are here, to be embraced … it definitely helps me understand that it wasn’t for a loss,” Augustus said. “I actually made an impact during my time here at LSU.”

As one of only five Tigers to top the 2,000-point mark, Augustus ended her career with 2,702 points, the second-highest total in program history. She was selected as the No. 1 overall pick in the 2006 WNBA Draft by the Minnesota Lynx, going on to play a 15-year career, winning four championships and a 2011 WNBA Finals MVP. Plus, a three-time gold medalist (2008, 2012, 2016) as a member of the United States Olympic Team.

The impact speaks for itself. The legacy, quite literally, is cemented.

“Make your legacy,” Augustus told the team last season. “Make an imprint here. Set your goals and then go out there and work every day at it. Don’t ever think that you have to live up to anything that we did. But you are more than welcome to exceed. Just continue to have fun, represent yourself, your families, and this university the best way you can.”

A Baton Rouge native, Augustus’ legacy impacted her home town, earning three first team All-America honors and the 2006 NCAA Class Award, which is given to the nation’s premier senior student-athlete based on achievement in four areas: community, classroom, character and competition.

“I was determined to represent my city and my state,” Augustus said. “When traveling the world, my thought process was if this was the first time you saw someone from Baton Rouge, Louisiana play or the last time, you are going to always remember that we had a lot of heart, we’re very determined people and we were going to stand our ground. We don’t give in and we don’t give up.”

Supporting from afar, Augustus appreciates how much Kim Mulkey is respecting the past. The legacy Augustus and others built is not going untold. After going 26-6 in 2021, earning a No. 3 seed in the NCAA Tournament, it’s a legacy that is only going to be embraced for the future.

“The way that she came in, honoring the past, understanding what we brought to the table and the many battles we had against Baylor – the loss in the championship,” Augustus said. “Respecting the past and understanding what it’s going to take to build a legacy of her own here with her players.”

What Mulkey is building, though, is a by-product of those that paved the way. Augustus remembered coming to an empty PMAC, sitting on one side of the arena because other sections were closed off, to playing in front of sold out crowds, leading the Tigers to three straight Final Four appearances. The history of excellence is rooted into the fabric of this program.

What she started, Mulkey and the Tigers look to continue.

“To think about being a little girl and coming to see those games, having to sit on one side of the gym because there wasn’t enough people in there, to then being sold out and nobody else can come in … to get to that point, I never realized the impact,” Augustus said. “It was the confidence and belief that we had in one another, but to know that we would be embraced like that, that people would come from all over to support Lady Tiger basketball, we never knew.”