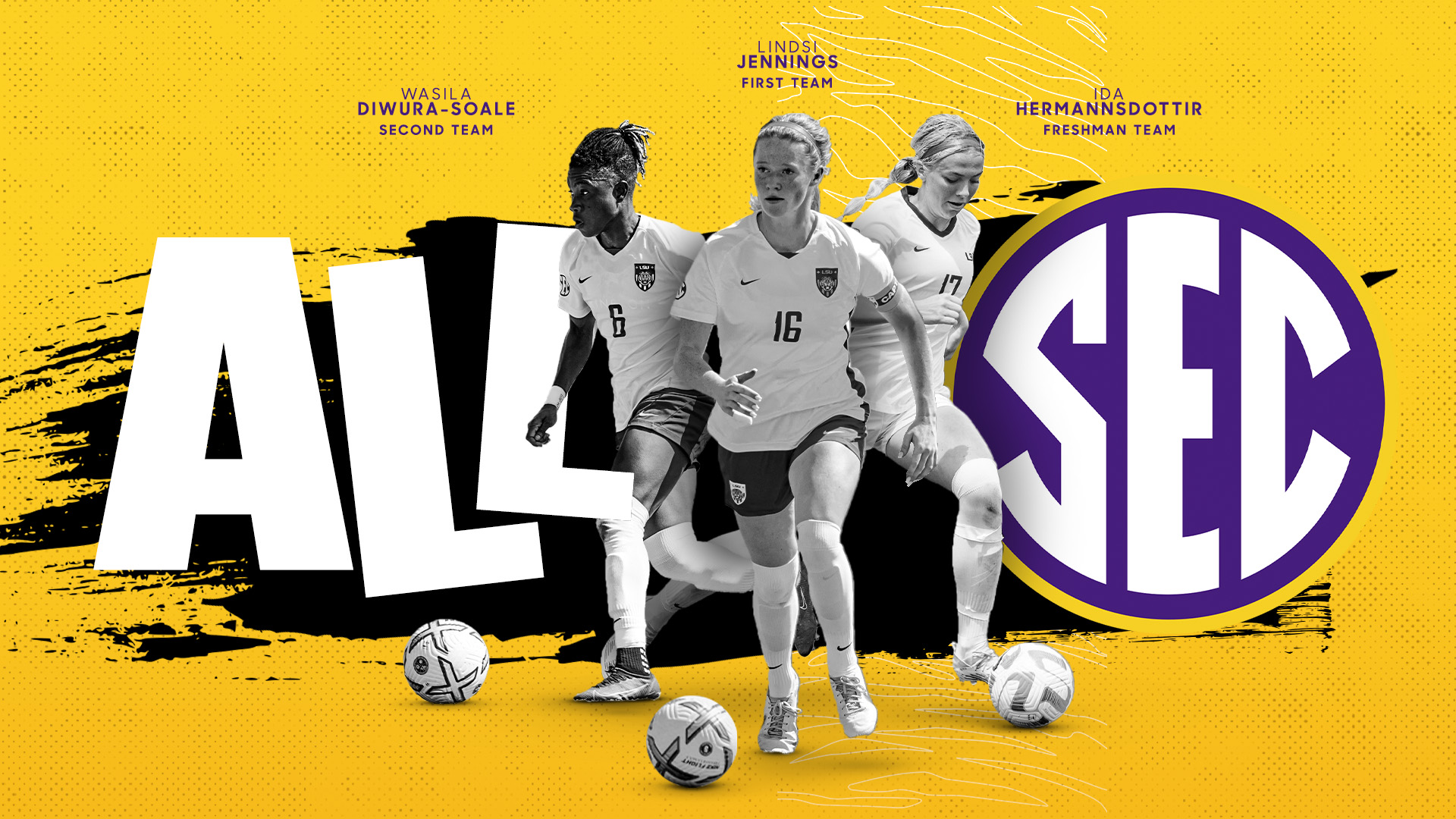 First-team and second-team All-SEC honorees, All-Freshman team in addition to the individual awards were chosen by the league’s 14 coaches. Ties were not broken.

Jennings, a native of Conroe, Texas, has been a key component in the backline for the Tiger defense. The fifth-year senior found two goals in conference play.

Jennings first goal of the season came in Nashville when the Tigers opened up conference play with a 2-1 victory against Vanderbilt on Sunday, September 18. She headed home a ball from fellow center back Shannon Cooke and found the back of the net. The goal gave LSU a 1-0 lead against the Commodores and Jennings earned her first goal of the season and second in her career.

Jennings has started in all 18 matches for the Tigers and has been a force in the backline. She has tallied two goals, one assist, two shots on goal, and five points on the pitch this season.

Wasila Diwura-Soale, a native of Accra, Ghana, is a consistent piece to both the Tigers offense and defense as she holds down the midfield position.

Diwura-Soale found her first goal of the season at Princeton. She helped LSU take a 2-0 lead against the Tigers in the 66th minute as she headed a cross from midfielder Brenna McPartlan goalward. The goal marked her first of the season and second of her LSU career.

In the Tigers last match against Ole Miss on Thursday, Diwura-Soale recorded the first brace of her career to lead LSU to victory. She found her first goal of the evening in the 19th minute. Forward Taylor Dobles found her wide open in the box and she was able to find the back of the net and put the Tigers up 1-0 early.

Her second goal of the match and third of the season came with just under a minute left to go in the first half, when forward Mollie Baker played her an excellent return ball that Diruwa-Soale coolly finessed into the top right corner to make the game 3-0 and extend the LSU lead.

Diwura-Soale has tallied three goals, three shots on goal, and six points through all 17 of her starts this year.

Forward Ida Hermannsdottir leads the squad in goals scored with six in her first season with the Tigers. A native of Reykjavik, Iceland, the freshman has led the way in goals this season.

Hermmansdottir found her first collegiate goal in the 33rd minute against San Diego to give the Tigers the 1-0 lead against the Toreros.

Her second and third career goals came against Grambling to earn the first brace of her collegiate career. Her first goal of the match gave LSU a 2-1 lead in the 27th minute with a superb long-range effort shot. She found the final goal in the 82nd minute after shrugging off a defender and slotting a ball past the Grambling State goalkeeper. This marked back-to-back games where the freshman found the back of the net.

Hermannsdottir’s sixth goal came at Texas A&M, when she charged into the box before being upended by an Aggie defender and the referee pointed to the penalty spot. Not short on confidence, Hermannsdottir stepped up and calmly placed the ball on the left side of the goal to tie the match 2-2 in College Station.

As a freshman, Hermannsdottir has earned the start in 14 out of the Tigers 18 matches and recorded six goals, two assists, 13 shots on goal and 14 points. She ranks eleventh in the country in goals scored.