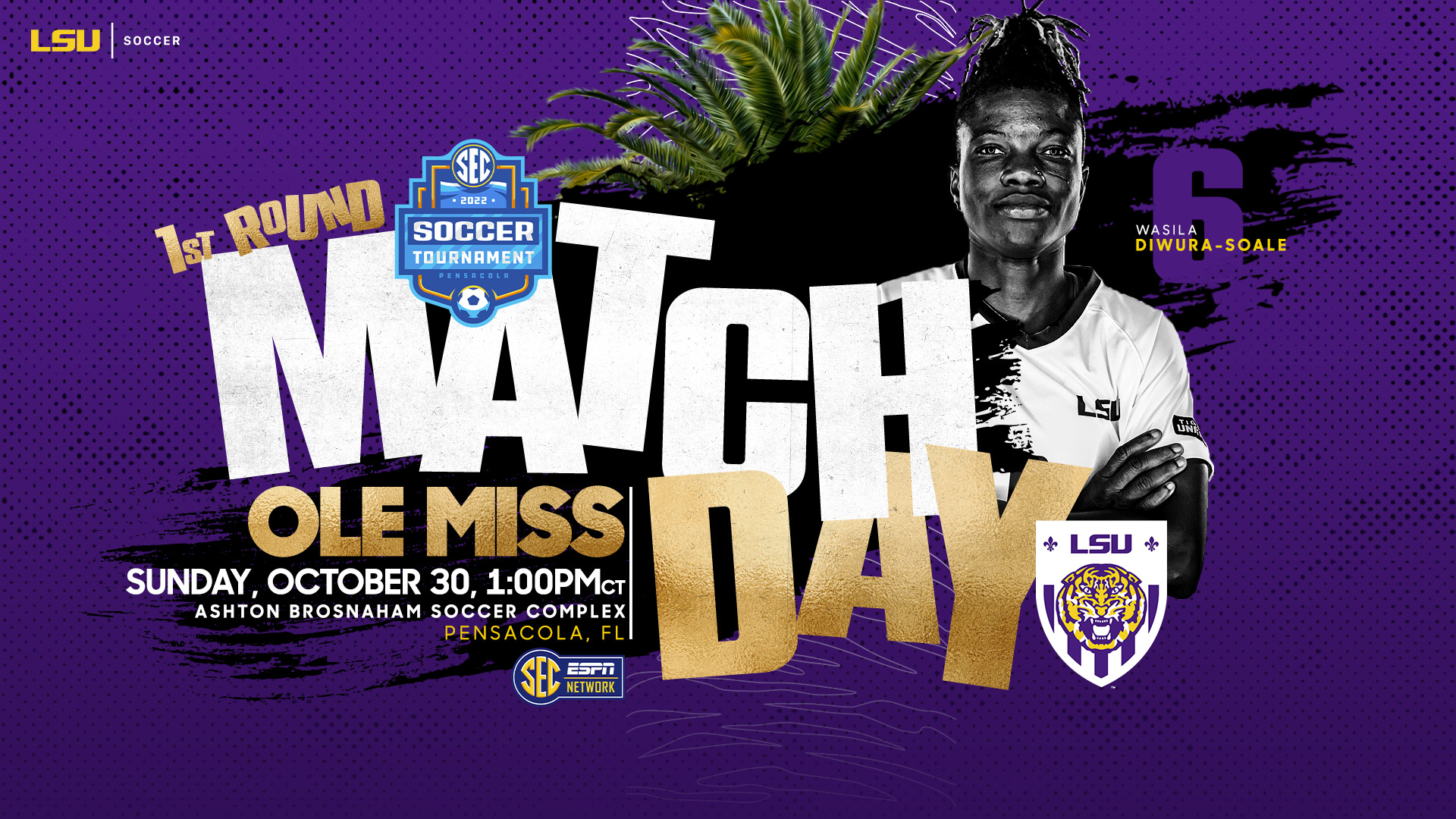 LSU holds a 13-13-4 series record against Ole Miss. The two teams previously met on Thursday in Baton Rouge, when the Tigers defeated the Rebels 4-1 in the regular season finale.

No. 7 seed LSU will meet No. 10 seed Ole Miss at 1 p.m. CT on Sunday for a back-to-back match against the Rebels. The winner will advance to the quarterfinals and face No. 2 South Carolina at noon CT on Tuesday, November 1.

The conference championship match is set for Sunday, November 6 at 1 p.m. CT.

All matches will be aired on the SEC Network.

This will be the Tigers 17th appearance in the SEC Tournament. The tournament, normally held in Gulf Shores, Alabama, was moved to Pensacola for the first time in 17 years in 2022.

LSU sits in seventh in the league heading into tournament play. The Tigers have accumulated 16 points in conference play this year and rank fifth in the SEC West division.

The Tigers celebrated senior night at the LSU Soccer Stadium in style on Thursday night as they defeated Ole Miss by a score of 4-1. All four of LSU’s goals came from fourth or fifth-year seniors.

Midfielder Wasila Diruwa-Soale began her stellar night with her first goal of the evening in the 19th minute. Alesia Garcia played an excellent ball down the left wing to Taylor Dobles, who possessed the ball and used a cheeky dribble move to get past her defender. Once Dobles was in the box, she found a wide open Diruwa-Soale who found the back of the net and put the Tigers up 1-0 early.

Fifteen minutes later, the Tigers found themselves on the scoresheet again thanks to the center back pairing of Shannon Cooke and Lindsi Jennings. Jennings saw Cooke making a run into the box and played a perfect ball that found Cooke who headed the ball with precision. Rebel goalkeeper Ashley Orkus had no chance to save the powerful shot from Cooke.

With just under a minute left to go in the first half, Diruwa-Soale added to the Tigers tally and linked up with Mollie Baker for a bit of tiki-taka. Baker played her an excellent return ball that Diruwa-Soale coolly finessed into the top right corner to make the game 3-0 and extend the LSU lead.

The second half saw Ole Miss notch their first goal of the match in the 75th minute when Aubrey Mister found the back of the net to cut the deficit to two goals.

LSU was not done adding to the scoresheet quite yet as senior Anna Rockett subbed on and made an instant impact in the 80th minute, scoring her first career goal in four years as a Tiger. Shannon Cooke knocked a ball down into the box which took a wonky deflection, but Rockett was patient and slotted the ball home through the Rebel keeper’s legs to seal the victory for LSU.

The Tigers closed the regular season in fashion as they defeated the Rebels 4-1 at home.

Senior Mollee Swift leads the SEC this season with 67 saves on the year as well as leading the conference with 4.19 saves per game.

The Papillion, Nebraska native has been vital in her three years in Baton Rouge. She has made 53 appearances, starting all of those, and posted 228 saves as a Tiger.

She currently ranks 4th all-time in the program’s career save category, trailing third place by only seven saves (Mo Isam, 235). Additionally, her 1.21 Goals Against Average places her fourth on LSU’s all-time list.

After scoring three each in non-conference play, Mollie Baker and Sage Glover both found the back of the net in SEC play for the first time in their collegiate careers in the Tigers win over the Kentucky Wildcats on Sunday, October 2. The forwards both narrowly trail the top scorers with four each on the year.

The forward ranks ninth in the country for assists.

Thoreson leads the Tigers with seven assists on the season. Along with a team-high seven assists, Thoreson has also recorded one goal, 10 shots on goal and nine points through 18 games. She started in 15 of those matches. The forwards ranks ninth in the country for assists.