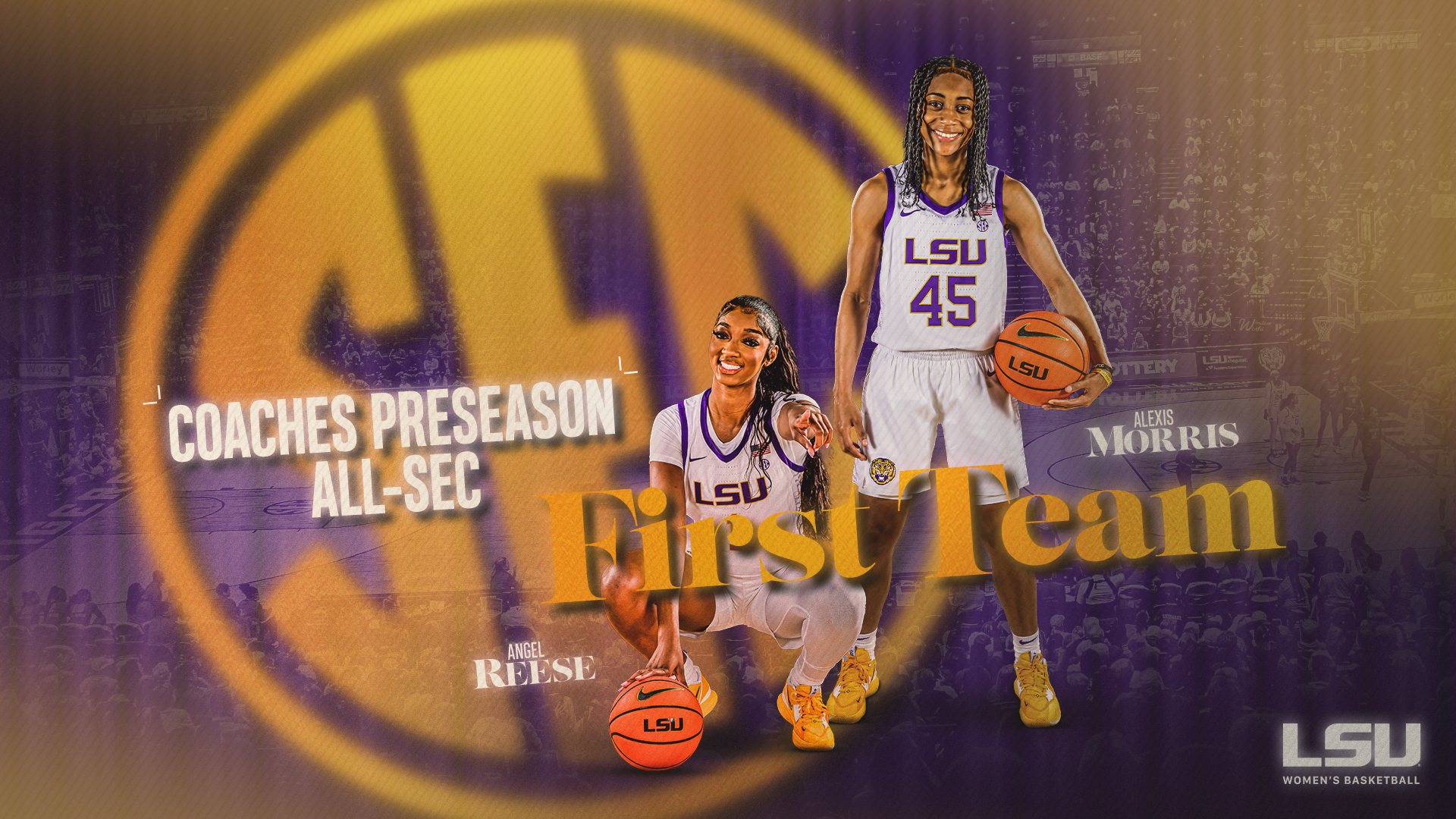 BATON ROUGE – Alexis Morris and Angel Reese of the LSU Women’s Basketball team were named to the Preseason All-SEC First Team on Wednesday morning by the league’s coaches and the Tigers were selected to finish third in the conference.

Morris and Reese were on the media’s All-SEC Second Team last week and the media also tabbed LSU to finish third in the conference. Morris was also named the the Nancy Lieberman Award Top-20 Watchlist and Reese was on the watchlist for the Katrina McClain Award.

Reese was also featured on Wednesday’s All-America Second Team released by The Athletic.

The Tigers will host their first exhibition game Thursday at 7 p.m. against Mississippi College in a rehearsal game that is free for fans to attend. LSU will host Langston next Thursday in its second exhibition before beginning the season on Monday, November 7 against Bellarmine in the PMAC.

Tickets are available here and Fans are encouraged to join the Fast Break Club, the official booster club of LSU Women’s Basketball, to support the Tigers on and off the court.

The 5-6 guard from Beaumont, Texas averaged 15.0 points per game and scored in double-figures in 22 games, including in her first 11 with the Tigers. Her 46.1 shooting percentage ranked No. 8 in the SEC. Morris was part of LSU’s three headed monster in the back court that also included Jailin Cherry and 2022 Nancy Lieberman Award finalist Khayla Pointer. Morris is the only one of those three returning this season as the Tigers have nine newcomers, including Reese.

As the only returning starter, Morris is expected to take on a larger role distributing the basketball as a point guard this season while also continuing to score and create offense. Morris had six games last year in which she had five or more assists. Ryann Payne, the only other returner to average over 5.0 points last season will look to increase her offensive production as well. With nine newcomers, chemistry will come as the season progresses, but Morris and the Tigers will have numerous offensive weapons to get involved Reese (a forward rated as ESPN’s No. 1 most impactful transfer in the country from Maryland), Jasmine Carson (a sharp-shooting guard transfer from West Virginia) and LaDazhia Williams (a post player with four seasons of SEC experience at South Carolina and Missouri). Expect freshman guard Flau’Jae Johnson and JUCO transfer guard Last-Tear Poa to get in the mix offensively too.

Reese is entering her first season in Baton Rouge as a transfer from Maryland. ESPN ranked her as the No. 1 Impact Transfer during the offseason after leading the Terrapins to the Sweet 16 last season and averaging a double-double (17.8 ppg and 10.6 rpg), becoming the first Maryland sophomore since 1975 to do so. Reese had over 5 offensive rebounds in 20 games last season, crashing the boards hard and cleaning up off the glass. She was also effective on the defensive end, adding 53 steals and 36 blocks throughout the season.

The Baltimore, Maryland native is expected to make an immediate impact for LSU this season in Coach Mulkey’s second year on a roster that will feature nine newcomers (4 freshmen and five transfers). The Tigers are looking to replace nearly 73-percent of their offensive production from last season and Reese figures to help in that avenue.