"Greater Because of Her" - Trailblazer. Champion. Hall of Famer. These are only a few words to describe Ashleigh Clare-Kearney Thigpen and the impact that she has had upon the LSU gymnastics program and women’s athletics. 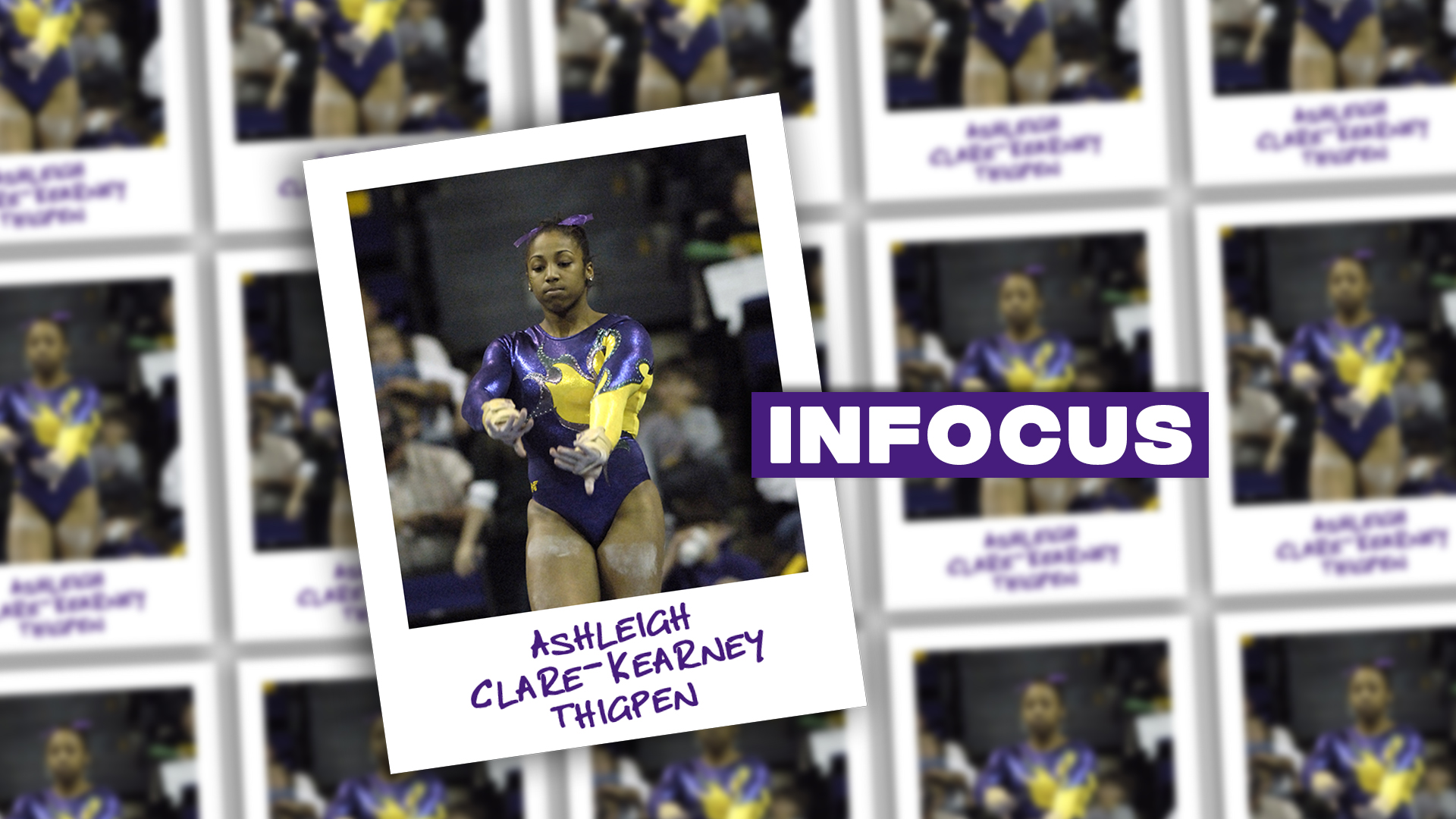 These are only a few words to describe Ashleigh Clare-Kearney Thigpen and the impact that she has had upon the LSU gymnastics program and women’s athletics.

Clare-Kearney Thigpen, a 2021 inductee into the LSU Athletics Hall of Fame, is the epitome of what it meant to be a student-athlete at LSU. Her talents extended far past gymnastics. She was a leader in the gym, in the classroom and in the community.

“Anything that I put my name on, anything that I’m a part of, I want to exceed the expectations of the people in the room,” says Clare-Kearney Thigpen, a native of Manchester, Conn. “That’s what pushed me to ensure that I was as successful as I possibly could be.”

“There was never a day where she felt that her accomplishments and status placed her higher than any of her teammates. Her willingness to accomplish whatever it was for the team always had priority over her personal goals” said D-D Breaux, the legendary former LSU gymnastics coach.

Attending LSU was not initially on Clare-Kearney Thigpen’s radar. All she knew was that she wanted to compete in the SEC, since it was the most successful conference in gymnastics.

It was the overwhelming feeling of family that drew Clare-Kearney Thigpen to LSU. She followed her gut and found a place where she felt like she would be more than just a gymnast and could grow and develop in a way that she wasn’t going to anywhere else.

Clare-Kearney Thigpen competed on the LSU gymnastics team from 2005-2009, where she earned 114 individual titles, the most in program history. She also became the first LSU gymnast to earn two individual national championship awards in one season during her senior season (2009).

In 2008, she was Three-time First-Team All-SEC, SEC All-Around and Floor Champion, and SEC Gymnast of the Year.

While she was accomplished in the gym, Clare-Kearney Thigpen’s character and leadership outside of the arena is what made her different. She participated in numerous community service events, such as the Walk for the Cure, and helped lead her team to winning the LSU Tiger Award, which is presented to the LSU team with the highest GPA, best national finish and most community service hours.

Her favorite moment of her gymnastics career was during her junior season (2008), when she helped lead her team to the program’s first ever Super Six finals appearance.

“Being a junior and getting to give that gift to one another, and also to D-D, who built the program from nothing, was probably the most memorable moment of my career at LSU,” says Clare-Kearney Thigpen. “There’s only 15 of us who can say we were on that first team to make it to Super Six. It’s awesome to have been a part of that.”

Clare-Kearney Thigpen completed her undergraduate degree in May 2008, followed by her master’s in 2010. After completing her master’s, she still wanted to challenge herself and get a new experience.

In 2010, she decided to attend law school at Southern University, where she completed her law degree in 2013. She worked as an attorney at a private practice following the completion of her degree, where she began to gain some of her own experience in the equity field.

While she loved the argumentative and writing aspects of being an attorney, Clare-Kearney Thigpen always knew that she wanted to work in sports.

She began volunteer coaching with the Tigers in 2010, while still pursuing professional endeavors as an attorney, and she became a vital piece to the gymnastics program. She helped improve the LSU floor routines to top-five rankings in the event in seven of nine seasons she worked with the team, and undoubtedly became one of top choreographers in NCAA gymnastics.

As a female African-American in a predominantly white sport, and the only person of color on her team during her college career, Clare-Kearney Thigpen wanted to use her own experiences to be a voice for those who may feel like they don’t have one.

She worked as a volunteer coach with the gymnastics program until the end of the season in 2021. Today, she works as the Associate AD of Diversity, Equity and Inclusion at LSU.

“Having that experience as an athlete and the only person of color on my team, and also being coached by someone who cared about us as people, are the two things that impacted me the most and allow me to navigate the way I do now,” says Clare-Kearney Thigpen.

She continues to help create a culture and continue conversations on Diversity, Equity and Inclusion at LSU. The compassion that she received as an athlete allows her to bring that same compassion to her job and to today’s student-athletes.