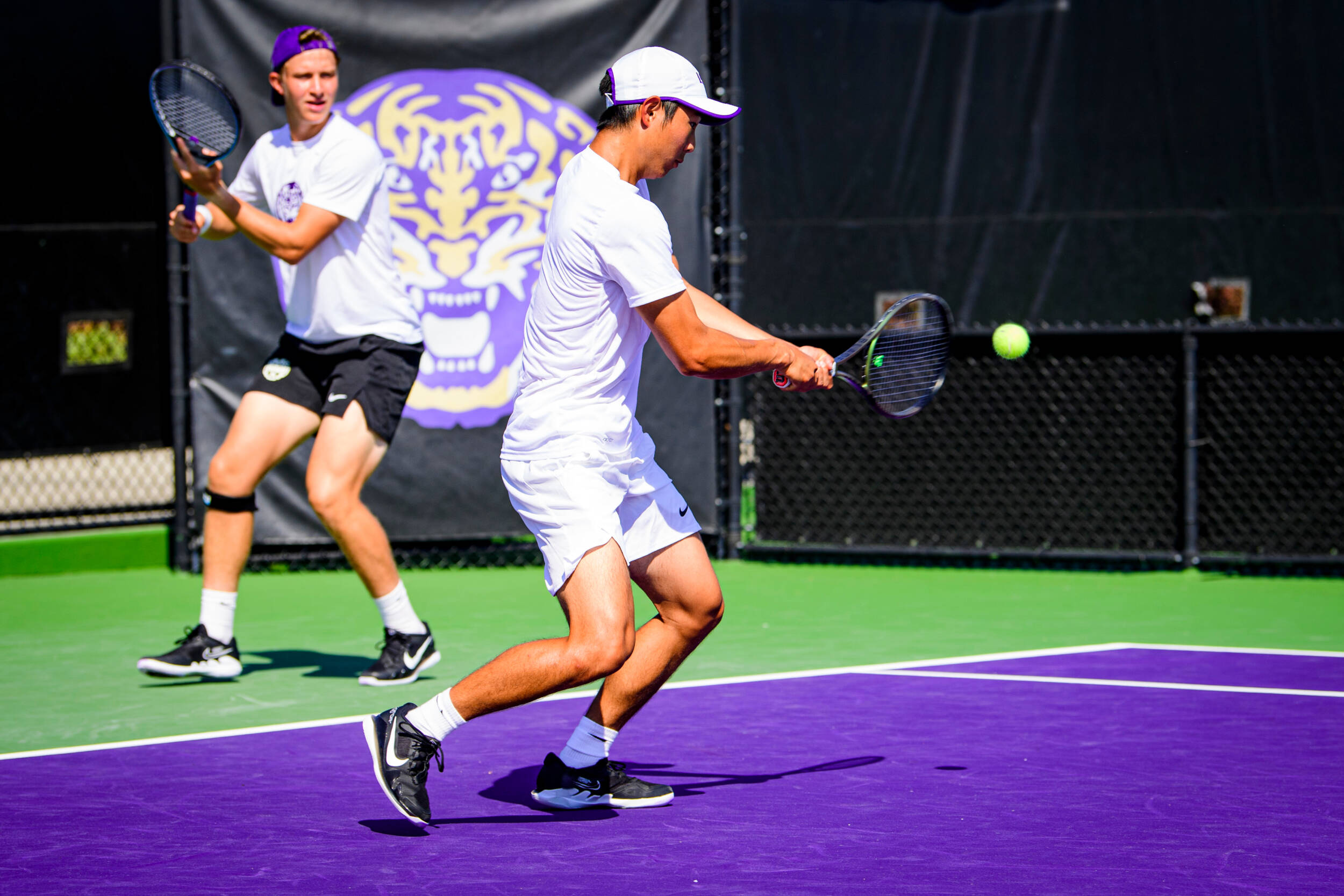 TUSCALOOSA, Ala. – Four Tiger duos and Two Tigers advance to the doubles and singles Rounds of 16 on day three of the ITA Southern Regional at the Alabama Tennis Stadium.

Chen Dong and Ben Koch took the court against Mohamed Ali Bellalouna and Santiago Arredondo of Samford. The Tiger duo secured the win 8-5.

No. 53 Penzlin and Hotard faced North Alabama’s Carlos Matarredona/Nazar Fedoryshyn. The pair made quick work of the match, winning 8-2.

Singles Main Draw Round of 64

Four Tigers took the court in the Main Draw Round of 64. Latinovic competed against Lukas Engelhardt of Ole Miss. Latinovic secured a straight set win 6-3, 6-4.

Benjamin Ambrosio faced Vasil Dimitrov of Louisiana in an intense double tie-breaker. In set one, The Tiger fell 6(6)-7 before going on to lose the match after a hard fought second set 6(6)-7.

Next, Dong took the court against Jacksonville State’s Alin Fatu. Dong made quick work of set one, 6-1, before going on to win the match 7-5 in set two.

Penzlin took on Yin Chih Lan of Alabama A&M. The Tiger secured set one in a tie-breaker 7-6(3). Penzlin was up 4-0 in set two when Chih Lan retired from the match due to injury.

Singles Main Draw Round of 32

Five Tigers players competed in the Singles Main Draw Round of 32 with No.14 Ronnie Hohmann and Welsh Hotard entering the singles competition. Hohmann competed against Samford’s Mohamed Ali Bellalouna. Making quick work of the match, the Junior won 6-0, 6-2.

Hotard took the court against Agustin Cuellar of Jacksonville State. The Tiger took set one 6-3 before going on to take the match 6-1 in set two.

Next, Dong opposed John Hallquist Lithen of Ole Miss in a three-set match. Set one went to Lithen 3-6. Dong event the match 6-3 in set two before eventually falling to the Rebel 3-6 in set three.

Penzlin faced off against Nemanja Malesevic of Mississippi State in a three set battle. Penzlin fought hard in set one but fell 6(3)-7. The Tiger came back in set two 6-2 before losing the match 3-6.

Koch went against Karlo Kajin of Louisiana. Set one went to Kajin 4-6 before Koch evened the match 6-4. In the ten point tie-breaker, the Tiger won the Match 10-8.

Two Tigers will take the court at 2:00 p.m. in the Singles Main Draw Round of 16. No. 14 Hohmann will face Enzo Aguiard of Alabama and Welsh Hotard will compete against Auburn’s Tyler Stice.

Four LSU duos will compete at 9:00 a.m. in the Doubles Round of 16. Hohmann and Stoupe will play against German Samofalov and Filip Planinsek of Alabama. Dong and Koch will meet John Hallquist Lithen and Simon Junk of Ole Miss. No. 53 duo Penzlin and Hotard face Ragin Cajuns Alejandro Sanchez Gonzalez and Karlo Kajin. Latinovic and Watson will oppose Auburn’s Josh Raab and Spencer Gray.

Seven Tigers will play in the Sunday Consolation Draw. Sophomore Cubitt will face Francisco Erramuspe of Troy at 9:00 a.m. At 10:00 a.m. Ambrosio will oppose Olimjon Nabiev of Southern Miss. Five players will take the court at 11:00 a.m. Stoupe will play Tulane’s Alex Bancila, Watson will face Joao Ferreira of Alabama, Koch will take on Auburn’s Josh Raab, Latinovic will see Michal Lusovksy of UAB and Dong will challenge Lukas Engelhardt of Ole Miss.

Singles Main Draw Round of 64