Carla Tejedo, who finished 2nd in the 2022 Stephens Cup, off the tee in Day 1 action Monday. Photo by Britt Runion. 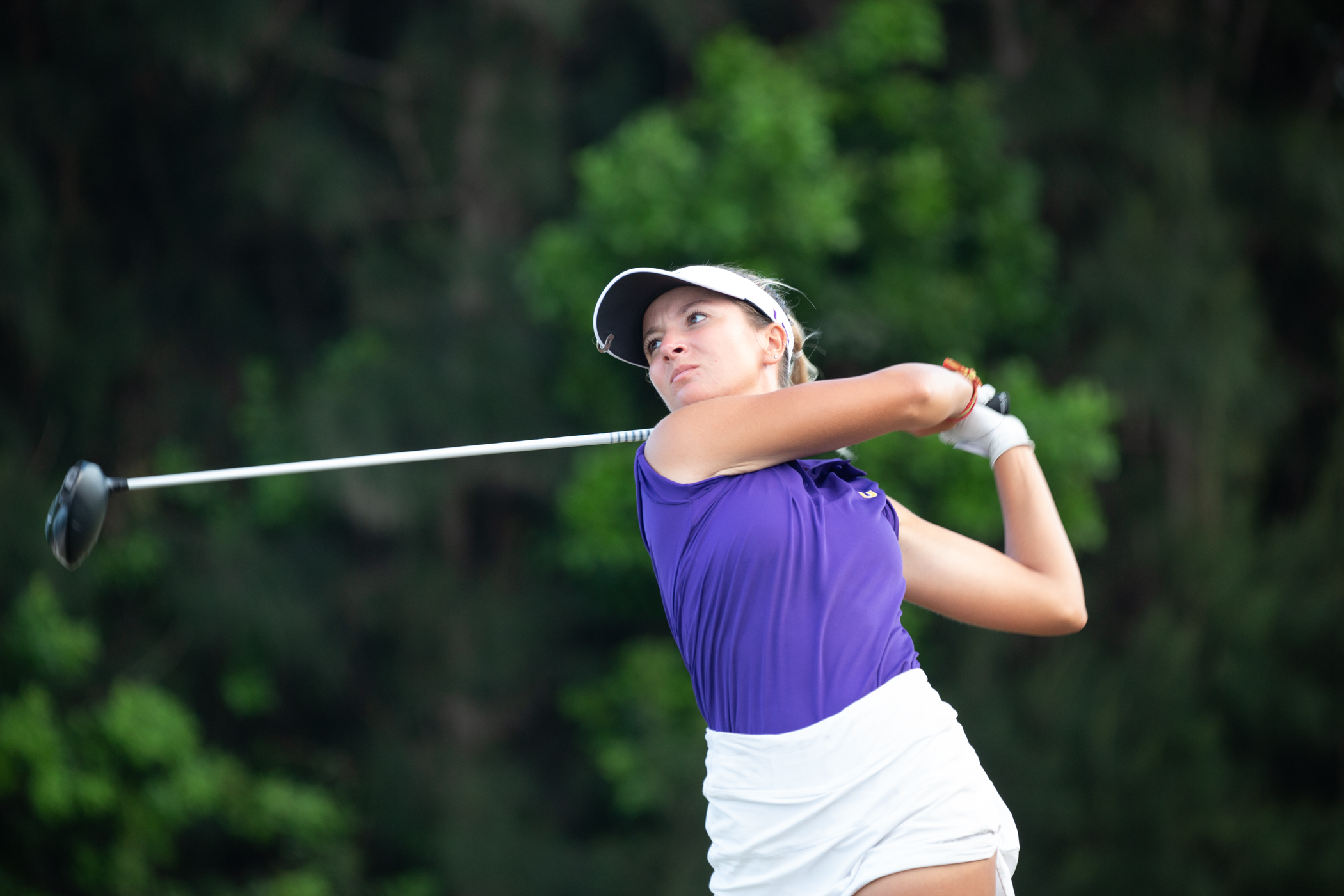 BATON ROUGE – A year ago, Carla Tejedo as a sophomore tied for medalist honors at the inaugural Jackson T. Stephens Cup at the Alotian Club in Arkansas.

Tuesday at the second Stephens Cup at an even more prestigious location, the Seminole Club in Juno Beach, Florida, Tejedo came oh so close to getting to the top spot again.

The 68s equal her second lowest round for the junior from Spain in her college career at LSU.

Because of where LSU was on the par 72 course, Tejedo was several holes ahead of Rachel Kuehn of Wake Forest, who had the overnight lead after 36 holes at 8-under 136. Tejedo entered the round at 4-under par and posted birdies on the par 4 first and par 5 ninth to get to 6-under at the turn.

She then birdied the par 4 11th and 13th holes to tie the lead at 8-under and moved to 9-under on the par five 14th hole. That gave Tejedo the tournament lead as Kuehn played her first nine holes in even par to remain at 8-under.

An approach shot issue on the par 4 16th hole dropped her back to 7-under par, but Tejedo responded with two outstanding efforts on the tricky greens at Seminole, holing a par putt from distance off the green on the par 3 17th and then, after an impressive approach shot on 18, dropped a sliding left-to-right breaker with an emphatic fist pump as it fell to tie the tournament at 8-under par.

“From the beginning to the end it was a very calm round until I got to 16,” said Tejedo in a post-round interview on The Golf Channel. “Everything turned the opposite way I wanted it to. But it was a really good round. I was very proud of how I handled it at the end. It wasn’t ideal, but I’m very happy with the finish. I actually didn’t know (needing the birdie on 18 to tie). I was really trying to enjoy it and I didn’t even want to ask my coach (Garrett Runion) about it. I was ‘just enjoy the round and get it done.’

“On 17, that (putt) was insane. I saw the girl I was playing with how her putt broke so I wanted to do just half of what she did. On 18, that was special. That was for my parents (Javier and Maricarmen watching in Spain) to see.”

The lead stayed tied until the second of the back-to-back par 5s on the back nine, the 15th, when Kuehn two putted for birdies and then followed up with another birdie at 16 to finished 10-under par 206 (67-69-70).

It was a final round where LSU’s top 3 of seniors Ingrid Lindblad and Latanna Stone and junior Tejedo combined to shoot 12-under par for the Tigers as part of a 7-under par final round.

Lindblad added another notch on the LSU record book with a clean card of 6-under 66, including a front nine score 31. It was her eighth round of 66 or lower in college play at LSU and her T8 finish marked her 26th top 10 finish at the school, eclipsing the mark of 25 by former Tiger Kristi Coats (1990-93).

Lindblad posted rounds of 74-73-66 to finish at 3-under par 213 for the tournament. Lindblad moved up 14 spots in the final round to get into the top 10. Lindblad has now posted seven consecutive top 10 finishes dating back to last year.

The Tigers have one fall tournament left, Oct. 28-30, at The Battle at The Beach in Cabo San Lucas, Mexico.