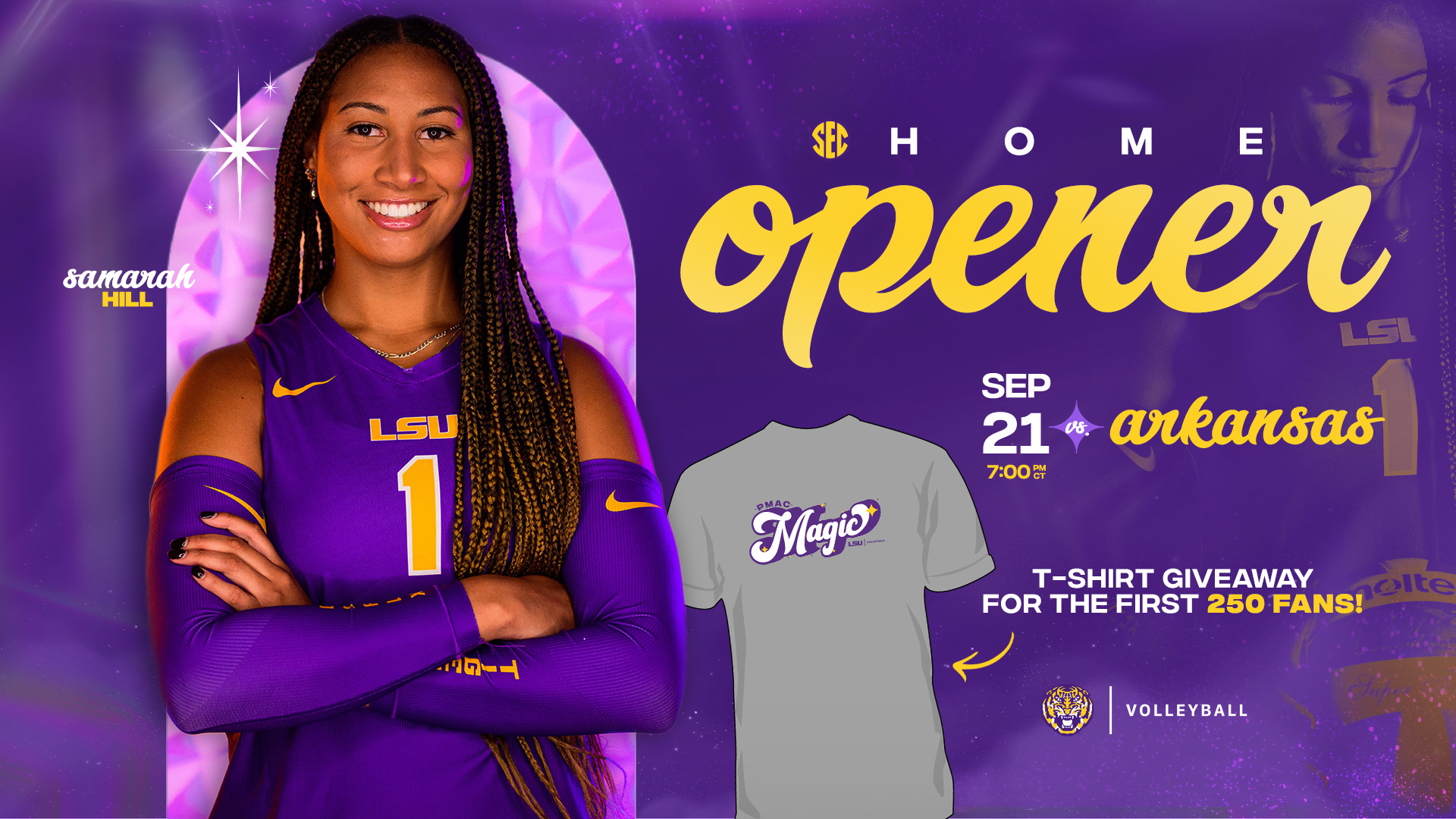 The Tigers and Razorbacks will square off on SECN+ with Lyn Rollins and Fran Flory on the call. Free t-shirts will be given to the first 250 fans in attendance.

LSU is 24-15 in SEC home openers since 1983 and are on a three-match winning streak which began with a sweep over Arkansas in 2019.

LSU is averaging 13.66 kills per set (No. 5 in SEC) and is hitting .253 on the year, while holding its opponents to a .179 hitting percentage behind 2.11 blocks and 15.31 digs per set. The Tigers have held their opponents below a .200 attacking percentage seven times this season and has done so three times in a four-match span.

Dotson is the Tigers top offensive threat and ranks No. 3 in the SEC with 4.20 kills per set (147 total) and No. 4 with 4.67 points per set. Dotson, who is this week’s SEC Offensive Player of the Week, has nine aces, 18 blocks and 2.34 digs per set. Right side Hannah Jacobs follows with 2.63 kills per set (92 total) and has 22 blocks this season. Jacobs is coming off a career-high .667 hitting percentage at Tulane behind 10 kills on 15 errorless swings.

Setter Josie Vondran ranks No. 10 in the SEC with 7.55 assists per set and has 30 kills, 13 blocks and eight aces this season. Freshman setter Maddie Waak also distributes the ball and has 5.30 assists per set and matches Dotson’s nine aces to lead the team.

Arkansas comes to Baton Rouge on an eight-match winning streak and have won two Top 10 matches this season including last weekend’s upset over then No. 7 Georgia Tech, 3-1. The Razorbacks lead the country with 14.79 kills per set behind a .298 hitting percentage that ranks second in the SEC and 10th in the NCAA. They also lead the conference with 13.62 assists per set and 16.03 digs per set. Arkansas holds its opponent to a .163 hitting percentage and averages 2.57 blocks per set.

A trio of Razorbacks that leads the offensive consists of outside hitters Taylor Head who averages 3.72 kills per set, Jillian Gillen who is at 3.62 kills per set and Maggie Cartwright who has 3.38 kills per set. Head leads the team with a .362 hitting percentage and has 16 blocks, nine aces and 2.90 digs per set. Gillen has 16 aces on the season and 15 blocks, and Cartwright has 28 blocks this season. Setter Hannah Hougue averages 7.41 assists per set with eight aces, and libero Courtney Jackson leads the team with 3.88 digs per set and 17 aces.

LSU is trailing Arkansas in the all-time series 23-30 although they have won five of the last seven meetings. The Razorbacks defeated the Tigers 3-1 last season in the SEC opener in Fayetteville, Ark.