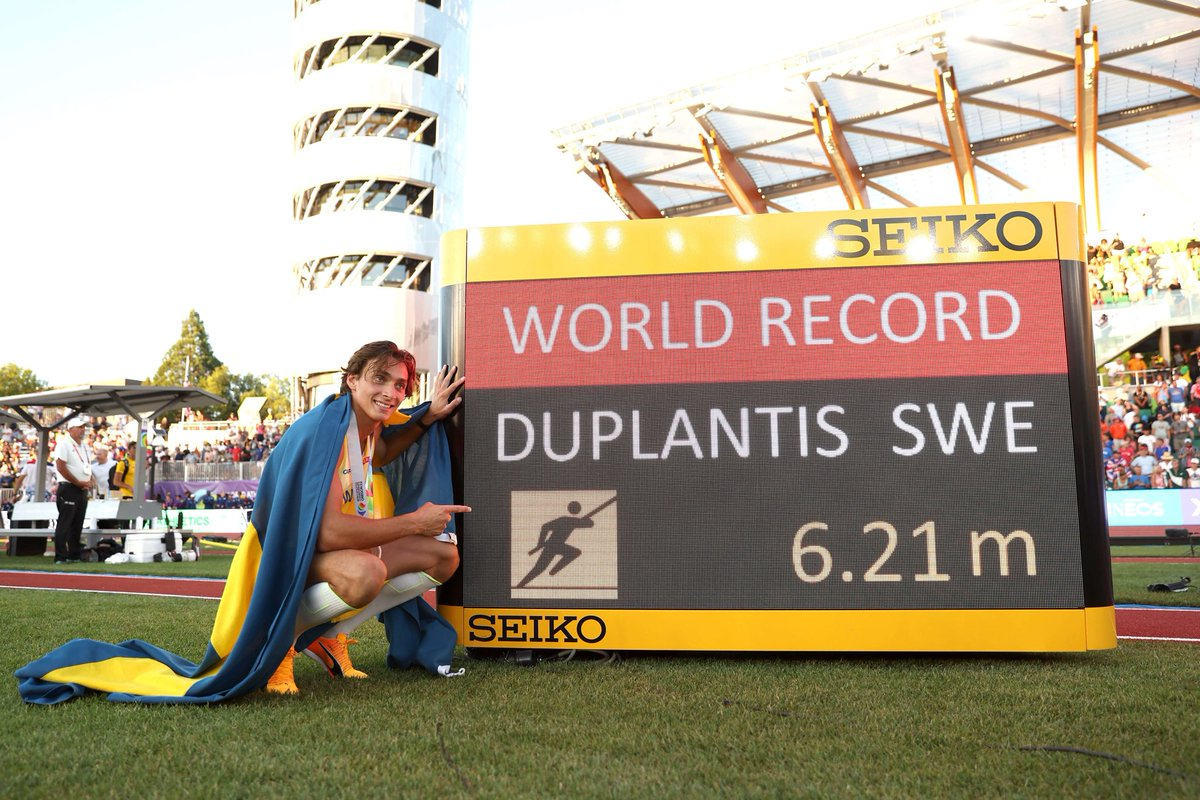 EUGENE, Ore. – Former LSU Track & Field star Mondo Duplantis stole the show on Sunday night, breaking his own world record with a pole vault of 6.21m to win the gold for Sweden at the World Athletics Championships.

With the vault, Duplantis broke his record of 6.20m set in March of this year; he now holds the six highest vaults in world history. The 22-year-old adds a gold at World Outdoors to his already impressive trophy case, which includes a gold medal at the 2021 Olympics and the 2022 World Indoor Championships.

Duplantis clinched the gold after vaulting 6.00m, which no other competitor was able to match. After clearing 6.06m on his next attempt, the bar raised to 6.21m, equivalent to 20’ 4.5”. He cleared it on his second attempt in front of an incredible crowd in Eugene, in what was the final act of the World Outdoor Championships.

Mondo Duplantis. World Record. We Are All Witnesses. pic.twitter.com/pDVkuyBZ3K

It did not take long for former Tiger Vernon Norwood to win hardware for Team USA. The quartet of Norwood, Kennedy Simon, Elija Godwin and Wadeline Jonathas won their first heat with a time of 3:11.73 on day one of the Championships. Allyson Felix replaced Jonathas in the final race of her legendary career. Norwood split a 44.40, the fastest in the race, as the Americans placed third in the final (3:10.16) to take home the bronze.

It is the third medal that Norwood has won at World Championships, adding to two golds collected in 2015 and 2019. He also has two trophy finishes at World Indoor Championships and two from the 2021 Olympics.

Norwood also qualified Team USA in the men’s 4x400m relay, running a 2:58.96 to win their heat and advance to the final, where he did not race.

Hobbs also represented Team USA well, qualifying for finals in both the 100m and women’s 4x100m relay. She won her first 100m heat with a time of 11.04 and placed second in her semi-final (1o.95) to advance to the final. She trimmed her time even further in the final, running a 10.92 to finish sixth in the world in her first individual final at a major championship.

Nethaneel Mitchell-Blake also appeared on the podium, captaining Great Britain to a bronze in the men’s 4x100m relay. After qualifying for the final with a time of 38.49, Great Britain ran a season-best 37.83 in the final to place third behind Canada and the United States. Mitchell-Blake began his week with a third-place finish in the 200m, sending him into the next round with a time of 20.11. He placed third again in his semi-final, running a 20.30 and finishing the event in 12th place.

Rising junior Alia Armstrong won her first two heats in the women’s 100m hurdles, including a personal-best 12.43 in the semi-final to advance into Sunday night’s final. In the final, she ran a wind-aided 12.31 to finish fourth and move up to No. 2 on the collegiate all-time, all-dates list. It was a very impressive couple of months for Armstrong in Eugene; it was there she won the NCAA Championships in the 100m hurdles before placing fourth in the world in the same event.

Her fellow junior Favour Ofili made an early splash, winning her 200m heat with a time of 22.24 seconds. The 19-year-old came in third in the semi-final, narrowly missing out on the final and finishing the event in 1oth place.

Ofili also represented Nigeria in the women’s 4x100m relay, where they ran an area-record 42.22 to place fourth in the final.

JuVaughn Harrison easily advanced past the qualification round of the men’s high jump, clearing bars of 2.17m, 2.21, 2.25, and 2.28 in just five attempts. The 2021 Bowerman winner concluded the event on Monday evening with a ninth-place finish.

After winning his opening heat with a time of 45.81, Michael Cherry finished fourth in the semi-final, running a 45.28 in the 400m. The former Tiger finished 13th overall in the event.

For all results from the World Championships, visit www.worldathletics.org