New Orleans native and NCAA Champion hurdler is named the top amateur female athlete in the state of Louisiana. 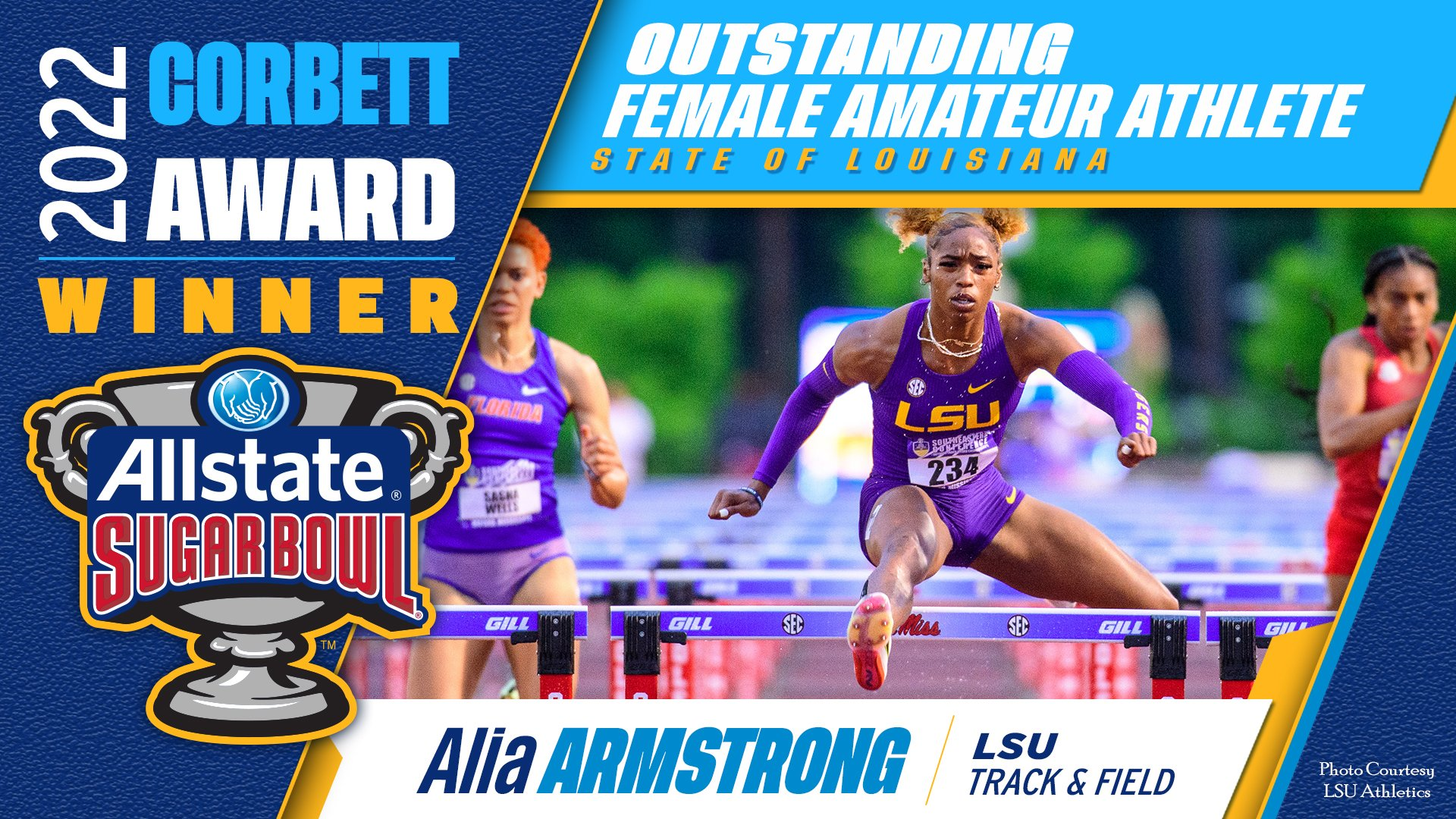 NEW ORLEANS – Alia Armstrong, a star hurdler for the LSU track and field team, has been selected as the Allstate Sugar Bowl’s James J. Corbett Award winner as the top female amateur athlete in the state of Louisiana.

The Greater New Orleans Sports Awards Committee, sponsored by the Allstate Sugar Bowl, selects annual award winners in a variety of categories; it also selects Amateur Athletes of the Month and each year’s Hall of Fame class.

Armstrong and 25 other individuals and four teams will be honored for their 2021-22 achievements at the Greater New Orleans Sports Hall of Fame Awards Banquet on July 30.

Armstrong made her Allstate Sugar Bowl “debut” in March of 2019 when, as a senior at St. Katherine Drexel High School in New Orleans, she dominated the Allstate Sugar Bowl Track & Field Classic. She shattered the meet record in the 100-meter hurdles and also won the 400-meter dash to earn Most Outstanding Track Athlete recognition.

Three years later, Armstrong has risen to a far higher level and she’s continuing to collect Sugar Bowl awards. Now a star for the LSU track & field team, she has been selected as the Corbett Award winner as the top female amateur athlete in the state of Louisiana.

She earns the honor after capturing the national championship in the 100-meter hurdles at the NCAA Outdoor Track & Field Championships on June 11. Her time of 12.57 seconds in rainy conditions landed LSU its first 100-meter hurdle title since 2000.

“I have always had the mindset that I can do anything, so I don’t want to say it was unexpected, but it was still overwhelming,” Armstrong said of winning the national championship. “It was like, ‘Oh my gosh, I did it, my hard work paid off.’”

Armstrong followed up her NCAA Championship performance by placing third in the 100-meter hurdles at the United States Track & Field Championships (all athletes, including professionals) to earn a slot on Team USA for the world Athletics Championships. She posted a time of 12.47 seconds to earn her spot on the national team.

This past weekend, she was sensational the World Championships – in the finals last night (Sunday), she earned fourth place against the top hurdlers in the world with a time of 12.31, which shattered her personal-best time.

“When I signed with LSU, Coach Shaver [LSU head coach Dennis Shaver] told me that he could not only take me to the national stage, but also the world stage,” she said. “My goal has always been to make it to that next level – to the world stage and [hopefully] the Olympic stage.”

Since her high school days, when she was a nine-time state champion in addition to her Sugar Bowl success, Armstrong has steadily built her speed and accomplishments. As a freshman for the Tigers in 2020, she took fifth place at the SEC Indoor Championships in the 60-meter hurdles. Her season-best time of 7.95 seconds was the third-best in LSU history.

In her second year at LSU, she qualified for the NCAA Outdoor Championships in the 100-meter hurdles and was a finalist in the same event at the U.S. Olympic Trials. Her time of 12.65 seconds at the Trials was the second-best in LSU history.

This year, she reached the collegiate pinnacle. Her wind-aided time of 12.33 at the Texas Relays in March was the fastest time in collegiate history under all conditions.

In May, she won the SEC Championship in the 100-meter hurdles with a slightly wind-aided time of 12.46 seconds while also running a leg of the Tigers’ winning 4×100 meter relay team.

At the NCAA Eastern Preliminaries, Armstrong posted a 100-meter hurdle time of 12.82 seconds to lock up her slot in the national finals. She also was part of LSU’s 4×100 relay team which posted a time of 42.98 seconds to advance to nationals.

And then she earned her first NCAA Championship while also helping the Tigers to a fourth-place finish in the 4×100 relay.

“Winning an award from my home city means the world to me because New Orleans is where my foundation was built,” she said. “That’s where I was made into the young woman I am today. It blows my mind how everything is coming together.”

For 13 years, the committee honored local athletes each month. In 1970, the Sugar Bowl stepped in to sponsor and revitalize the committee, leading to the creation of the Greater New Orleans Sports Hall of Fame in 1971, honoring 10 legends from the Crescent City in its first induction class.

While adding the responsibility of selecting Hall of Famers, the committee has continued to recognize the top amateur athlete in the Greater New Orleans area each month – the honors enter their 66th year in 2022. To be eligible, an athlete must be a native of the greater New Orleans area or must compete for a team in the metropolitan region.

The Allstate Sugar Bowl has established itself as one of the premier college football bowl games, having hosted 28 national champions, 100 Hall of Fame players, 51 Hall of Fame coaches and 20 Heisman Trophy winners in its 88-year history.

The 89th annual Sugar Bowl Classic is scheduled to be played on Saturday, December 31, 2022. In addition to football, the Sugar Bowl Committee annually invests over $1 million into the community through the hosting and sponsorship of sporting events, awards, scholarships and clinics.

Through these efforts, the organization supports and honors thousands of student-athletes each year, while injecting over $2.2 billion into the local economy in the last decade. For more information, visit www.AllstateSugarBowl.org.

The LSU honorees include Sean "Squirrel" Burrell, a Zachary, La., native who was named the men's Louisiana Track Athlete of the Year after winning the NCAA title in the 400-meter hurdles for the second straight year.
Duplantis Breaks World Record to Cap Off World Championships