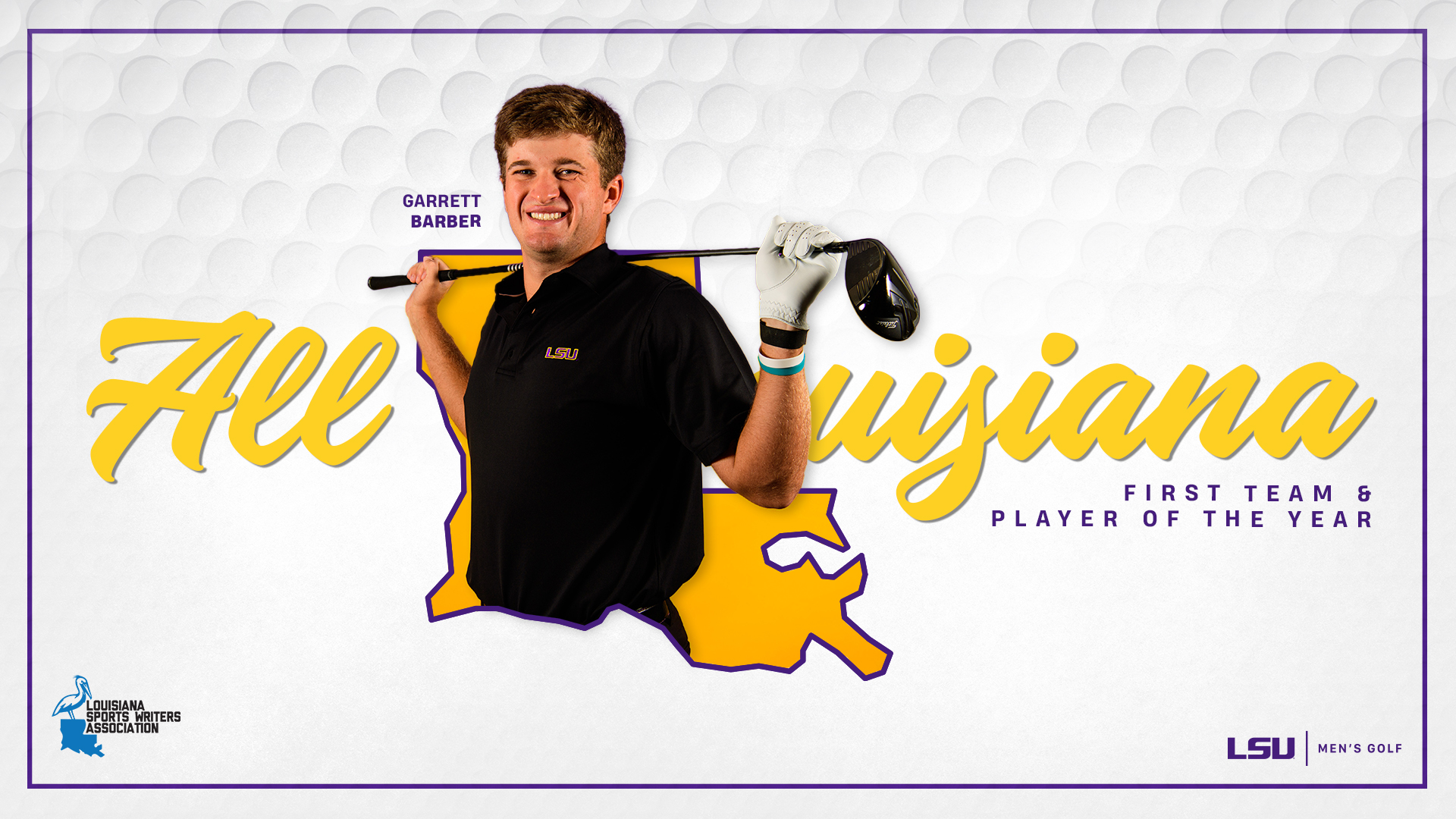 Baton Rouge, La. – LSU men’s golf senior Garrett Barber was named the Louisiana Player of the Year for the third consecutive season on Friday by the Louisiana Sports Writers Association.

Barber was one of five players to be recognized by the LSWA. Barber was joined on the first team by Michael Sanders and Cohen Trolio, who was named Freshman of the Year, while Nicholas Arcement and Drew Doyle earned spots on the second team. Head coach Chuck Winstead was named Coach of the Year.

Five players were selected for the first and second teams based on voting from nominations submitted by the school media relations offices in the state that play the sport. In the voting, schools could not vote for players from their respective schools.

Barber collected his third straight LSWA Player of the Year honor following his most successful season yet in his collegiate career. In 33 rounds of play, Barber scored a career-low average of 71.15 strokes and shot 21 rounds at or under par while grabbing a team-high 122 birdies. He led the team in Top 5 finishes with four on the year and contributed to LSU picking up two tournaments wins in the season with his scores counted in all three rounds of each. Most recently, he was named to the 2022 PING Southeast All-Region Team.

Trolio was named Freshman of the Year and earned a spot on the first team after a successful first year at LSU. His 71.30 stroke average ranked second on the team and only trailed Barber in the team’s birdie rankings with 115 in 33 rounds. He shot 21 rounds at or under par and had all three of his rounds count towards LSU’s two tournament wins in the season. His All-Louisiana honors join a list of recognitions that includes spots on the SEC All-Freshman team and the PING Southeast All-Region Team.

The two specialty winners were joined by Sanders on the first team. The senior from Davidson, North Carolina secured the first medalist honor of his career with a 9-under 207 at the Turning Stone Invitational to highlight his season. Sanders grabbed 4 Top 10 finishes in the season, three of which were 5th place or higher, and led the Tigers with seven eagles on the year.

Arcement and Doyle were named to the second team after the pair enjoyed stellar sophomore seasons. Arcement earned the first medalist honor of his career with a 13-under 203 at the San Diego Classic and led the Tigers in pars with 385 in 33 rounds of play. Doyle also earned his first medalist honor with a 6-under 210 at The Hayt and grabbed three Top 5 finishes in the spring. Both players were named SEC Player of the Week as a result of their medalist honor.

Winstead rounds out the group as he was named Men’s Coach of the Year. He earned Coach of the Year honors after leading LSU to a pair of tournament titles and the semifinals of the SEC Championships. The Ruston, La., native led LSU to wins at the Jim Rivers Intercollegiate and the San Diego Classic while guiding three different golfers to medalist honors for the first time since the 2016-17 season.