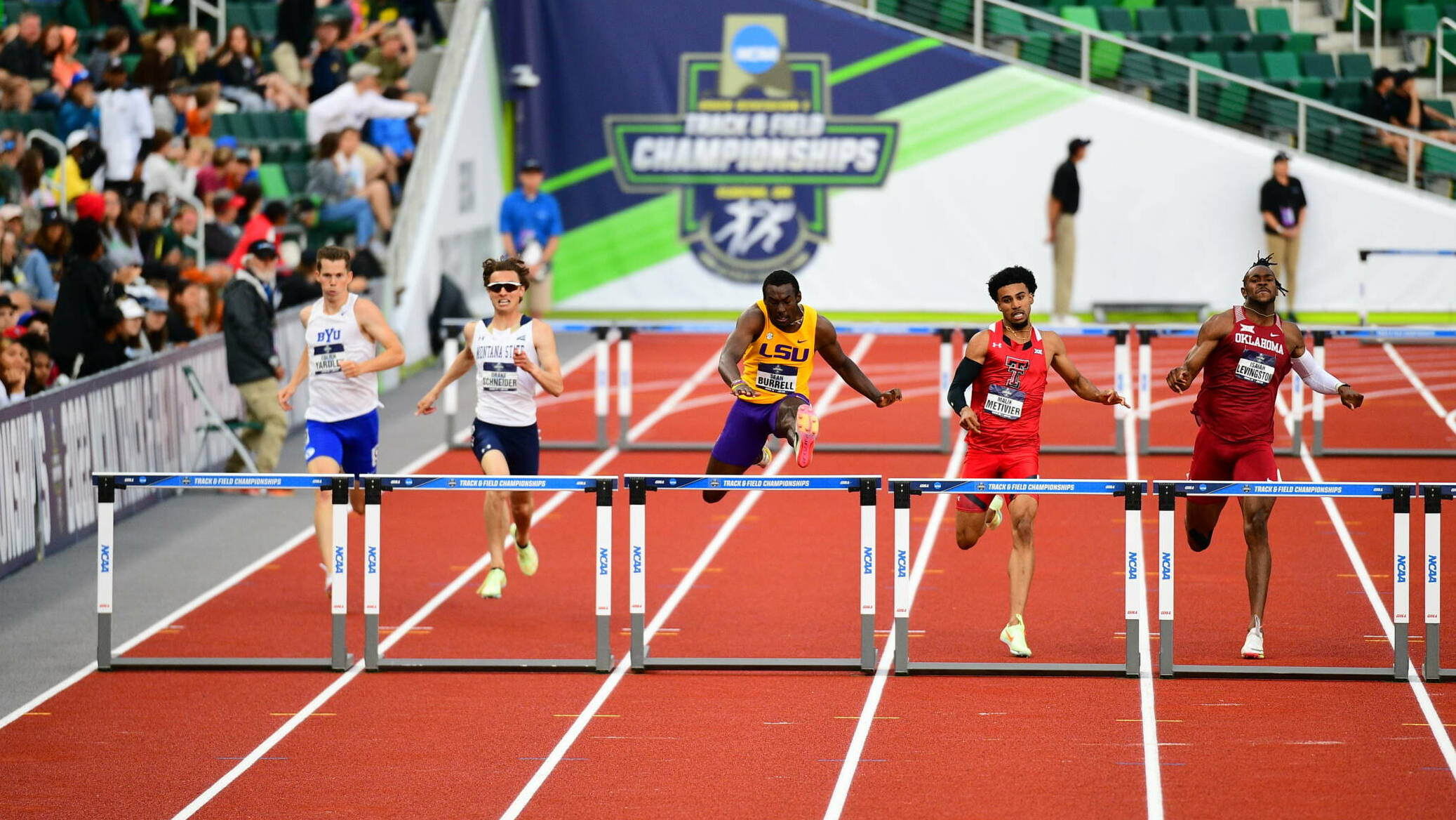 Eugene, Ore.  –  The LSU men’s track and field team scored 31 points at the 2022 NCAA Championships to earn a sixth place team finish at Hayward Field on Friday night. It marks the 24th straight year that the LSU men have finished in the top 10 at the NCAA outdoor meet. Read that again – that’s 24 straight top 10 finishes for the LSU men’s track and field program at the NCAA Outdoor Championships.

Sean ‘Squirrel’ Burrell came in to the meet as the reigning NCAA champion in the 400 meter hurdles, but not too many people picked him to win this year. Why? Well considering his best time of the year was outside the top 10 of the national rankings. But don’t ever count out a champion.

Burrell ran the first half of the race in about fifth or sixth place before activating his patented charge at the end of race. He went from fourth to first on the final straightaway and claimed his second straight NCAA title in the event to become the first man to win back-to-back titles in the event since 2017. He won with a time of 48.70, which is a big season best for the Zachary, La., native by a large margin. It moves him up into the top 10 of the world rankings for the 2022 season.

“It’s all about perseverance. Had some injuries throughout the season. Lots of long days and long nights,” Burrell said after his winning effort. “Every day at practice I just kept chipping away, and my coaches kept pushing me.

“Without God, this wouldn’t be possible. So grateful. I always know my finish is going to be strong, but I need to be in the race. I saw him on the inside of me and I told myself I had to keep going, but I couldn’t panic. This race I did what worked at the end. As everyone was slowing down, I was picking up speed.”

Eric Edwards Jr. ran the race of his life in the 110 meter hurdles as he garnered silver. He ran a time of 13.15 to finish as the national runner-up behind world leader Trey Cunningham of Florida State. The readout was special for a number of reasons. Firstly, it made him the fifth fastest performer in collegiate history over the distance. Secondly, it moved him up to the No. 4 slot on the 2022 world leaderboard and he now has to be considered as a possible candidate for a top three finish at the USATF Championships later this month. Lastly, that time bettered his position on the all-time LSU list in the No. 2 spot from 13.28 to 13.15.

Freshman Apalos Edwards launched a huge personal best of 53’ 9.25” (16.39 meters) in the triple jump on his first attempt of his first ever NCAA outdoor meet. He was unable to go farther than that mark and he stayed in third place for the whole event. LSU’s final scorer on Friday was Da’Marcus Fleming with a time of 10.20 in the 100 meters to place eighth.