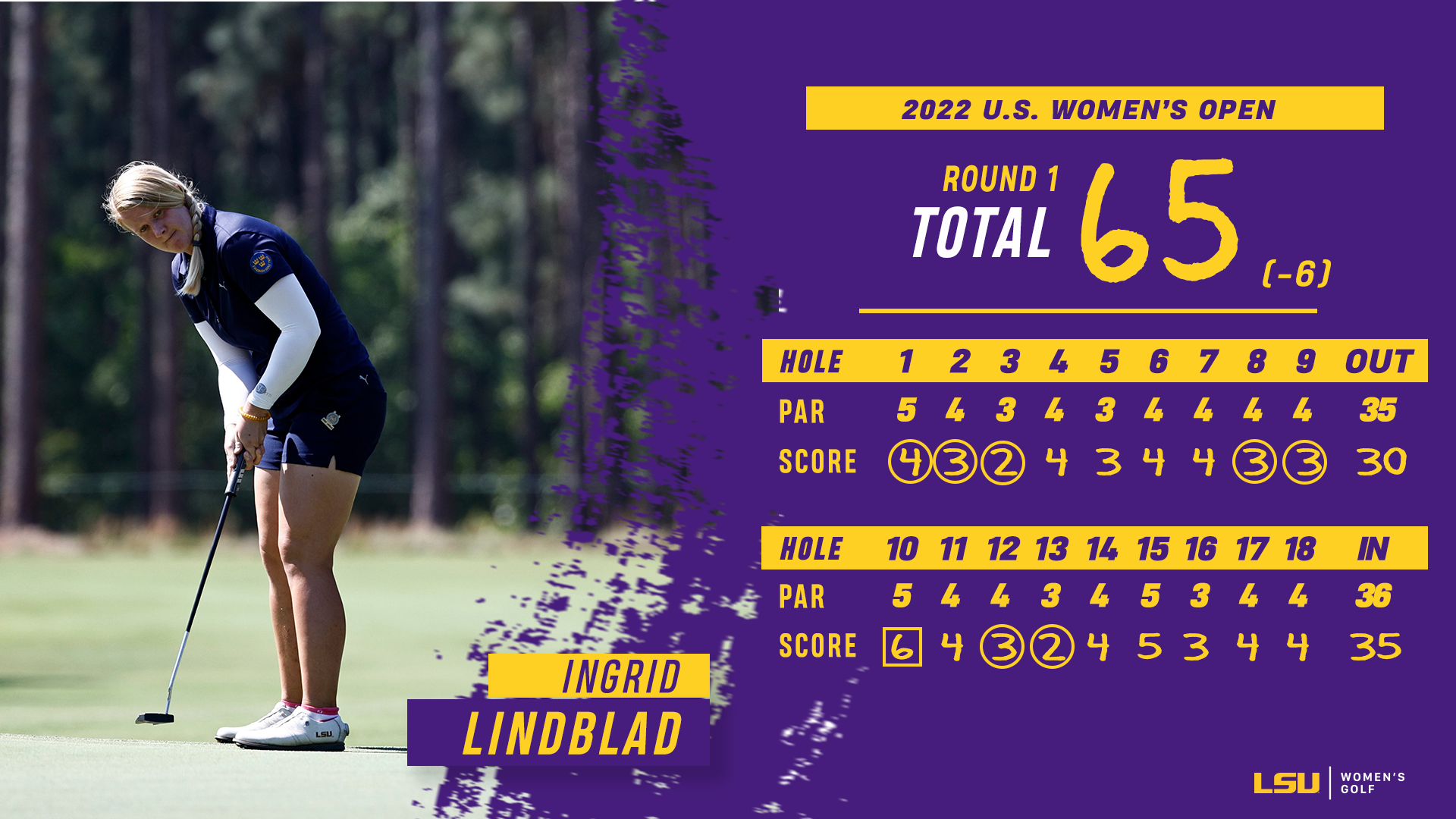 BATON ROUGE – LSU junior golfer Ingrid Lindblad got into her opening round of the 77th United States Women’s Open with a birdie and a-bogey through the first two holes. It was a solid start, but the three-time All-America was just getting warmed up.

From there Lindblad proceeded to post six birdies on the next 16 holes to post a 6-under 65 for the lowest round ever shot by an amateur in the Women’s Open.

She is in second place after one round of this prestigious championship that runs through Sunday. Mina Harigae, who played in the afternoon wave, moved past Lindblad into the first-round lead at 7-under par 64. Three golfers are third at 4-under par 67.

With rounds starting on the first and ninth holes, Lindblad, who is the No. 2 ranked in the World Amateur Golf Rankings, followed her birdie on nine, bogey on 10 start, with a par on 11 and back-to-back birdies on the par 4 12th (395 yards) and par 3 13th (133 yards) to go to 2-under par for the day. She parred the next five holes to go back to number one and her final eight holes at 2-under.

Then came three straight birdies that pushed her to the top of the leaderboard with a four on the par-5 first hole, a three on the par 4 second hole and a two on the par 3 third hole (her 11th, 12th and 13th holes of the round). Lindblad posted four straight pars (including a long par save on the sixth) before reaching the final hole of her round, the par 4, 350-yard eighth.

Lindblad blasted a tee shot over the corner, leaving her just 82 yards to the flag. Her sand wedge was within 12 feet and she poured it in to set the record for the lowest amateur score in the Open. In all, Lindblad had just 26 putts in the round.

“My putting was really good,” Lindblad said in her post-round interview. “I hit some good shots into the greens and I just drained putts … I really had fun out there today. (Friday) could be a whole different story. But it’s a good backup in case something happens. It was a great round.”

The best previous round by an amateur was 66 when Gina Kim posted that in the first round in 2019, the third 66 in the Women’s Open. Brittany Lincicome, in the first round of the 2004 Open and Carole Semple Thompson in the 1994 first round, all shot 66. Three other amateur golfers have shot 67 in the tournament.

It so happened Lindblad was paired multiple U.S. Women’s Open Champion and all-time tour winner Annika Sorenstam, who is a fellow Swede. She was back in the U.S. Women’s Championship thanks to Sorenstam’s win in the 2021 U. S. Women’s Senior Open.

“Well on the first tee box – I teed off on nine – I get her score card. I’m like ‘I have Annika’s scorecard’ which is kind of insane. We talked a little bit, I talked to Mike (McGee, Annika’s husband) too and we had a great time out there. She fist bumped me sometimes when I made a birdie, so it was fun.”

It was a star-studded grouping going around the course as Sweden’s Sophie Gustafson, a 21-time winner on the LET and LPGA tours combined and with two U.S. Women’s Open appearances at Pine Needles, caddied for Lindblad and carried her LSU bag around the course.

“I didn’t really have a caddie and Patrick (coach for the Swedish National Team) texted her and asked if she could come over. She came over. I think it is the first time I’ve met her,” she said. “I feel like I was kind of in the zone. We didn’t talk a lot. She gave me the numbers and I tried to hit the numbers. I like to read the greens myself. We were just hanging out there.”

Also, former LSU golfer Madelene Sagstrom, who has had four consecutive LPGA top 10s coming into this event, posted a 2-under par 69 and is T8 after the first round. Sagstrom survived a double bogey on the 17th hole, her ninth of the day and came back with an eagle on the par 5 first hole, before birdies on two-of-the-final-three holes to get home.

Both players will be in the afternoon wave Friday with Sagstrom at 1:02 p.m. CT and the Lindblad-Sorenstam group going fourth-to-last at 1:35 p.m. CT. Coverage begins Friday live on Peacock at noon with the over-the-air telecast starting on USA Network from 2-7 p.m. CT.