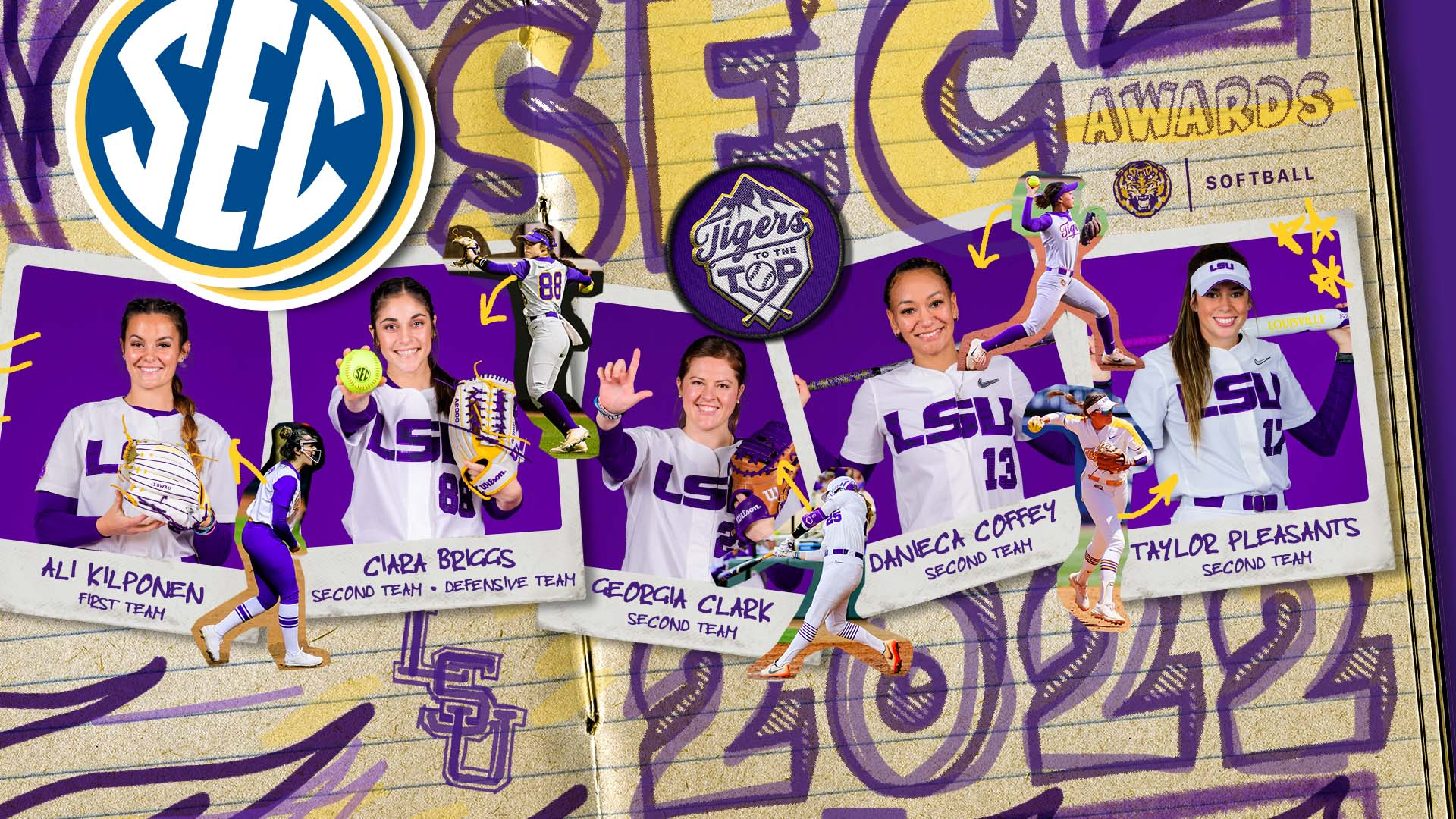 BIRMINGHAM, Ala. – Junior Ali Kilponen was honored to the 2022 All-SEC First Team while junior Georgia Clark and sophomores Ciara Briggs, Danieca Coffey, and Taylor Pleasants all garnered All-SEC Second Team distinctions announced by the league office Friday. Briggs was also named to the 2022 SEC All-Defensive Team, marking the fourth consecutive season that LSU has been represented on the SEC All-Defensive Team excluding the 2020 season (COVID-19).

Kilponen earned her first career All-SEC postseason accolade and becomes the first LSU Tigers pitcher to be honored to the All-SEC First Team since 2018 (Allie Walljasper). This season, Kilponen has recorded a 2.32 ERA behind 138 strikeouts which ranks No. 8 in the SEC. Kilponen has posted 18 wins in the circle (No. 4 in the SEC) and threw five shutouts, including her first career no-hitter against Nicholls on March 23.

Briggs was placed on the 2022 All-SEC Second Team and listed on the 2022 SEC All-Defensive Team as a centerfielder. At the plate, Briggs has a.366 batting average with 67 hits (No. 7 in SEC), a team-high 52 runs scored (No. 3 in SEC), and 32 RBIs. In the outfield, Briggs has accumulated 78 putouts and six assists with no errors in 84 chances. Briggs had several highlight reels in the outfield this season, including SportsCenter’s No. 1 play in its Top 10 Plays where she robbed a home run against Texas Tech on Feb. 20.

Clark and Coffey were named to the 2022 All-SEC Second Team, receiving their first All-SEC postseason awards. Clark is batting .285 on the year and leads the Tigers with 16 home runs (No. 8 in SEC), 59 RBIs (No. 3 in SEC), and a .656 slugging percentage. Clark’s 16 home runs this season ranks No. 6 in the program’s record book for the most home runs in a single season. Coffey pace the Tigers with a .385 batting average, .464 on-base percentage, 70 hits (No. 3 in SEC), and 10 stolen bases to go along with 26 RBIs. Coffey hit a grand slam as her first career home run in the regular season finale against Mississippi State on May 8.

Pleasants becomes a two-time All-SEC recipient after being placed on the 2022 All-SEC Second Team. Pleasants is batting .302 on the year, has a team-high 27 extra-base hits, including 14 doubles (No. 2 in SEC), 12 home runs, and one triple. The six-foot shortstop ranks No. 2 in the league with 105 assists and has been involved in 12 double plays in 224 chances.

The NCAA Softball Championship Selection Show will be at 6 p.m. CT on Sunday, May 15 and will be televised on ESPN2.

The complete 2022 SEC Softball Postseason Awards is as follows: