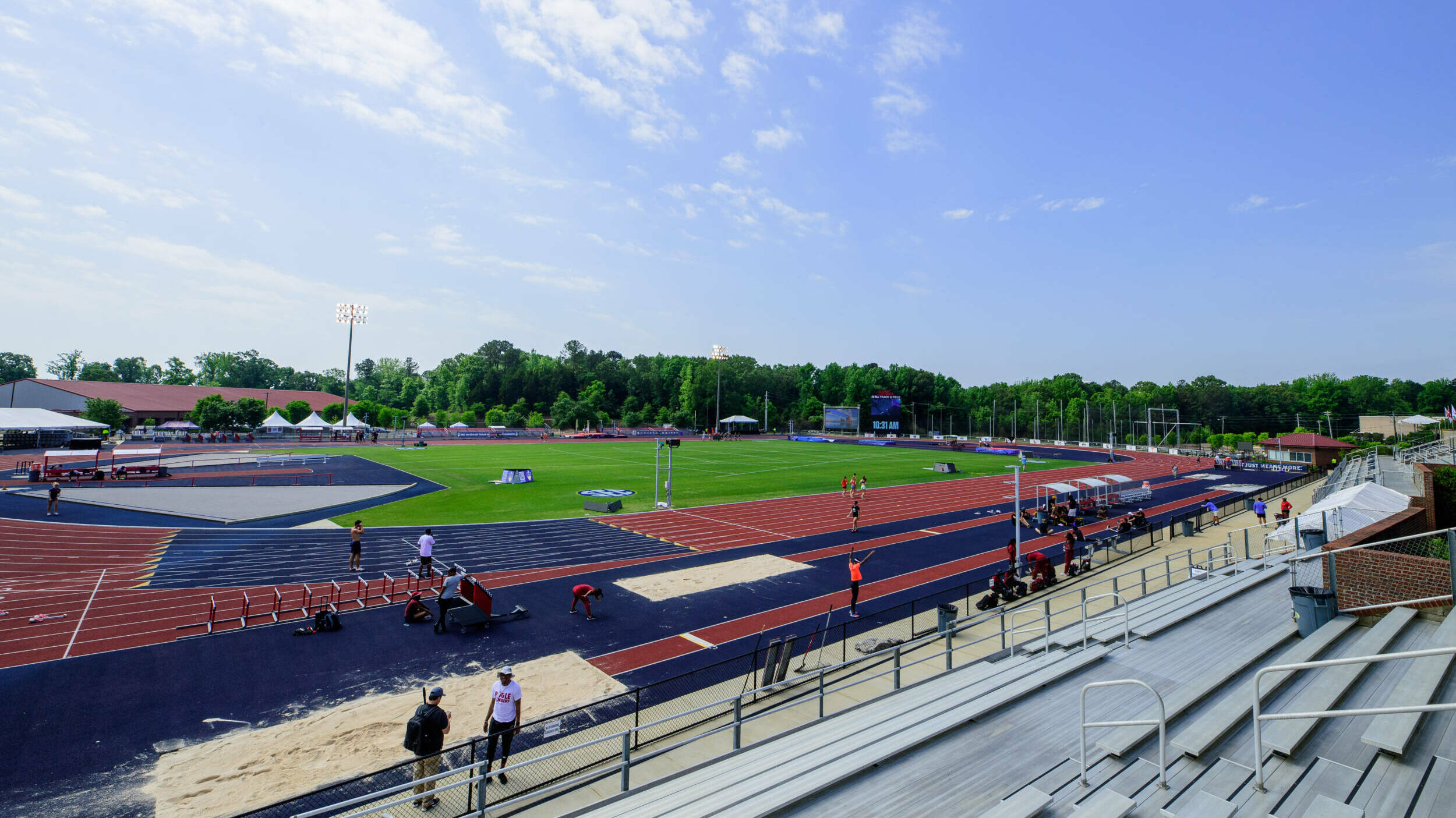 Baton Rouge, La.  –  Let the fun begin. The fourth ranked LSU women’s and men’s track and field squads are set to begin postseason action this Thursday through Saturday in Oxford, Mississippi, at the SEC Championships. The three-day meet, which is by and far the most competitive conference meet in the country, will be hosted at the Ole Miss Track & Field Complex.

LSU has travelled a competition crew of 51 student-athletes (25 women, 26 men) to Mississippi for the SEC meet. Track and field fans who love to watch track are in good favor as all three days of the meet will be stream/televised. The first two days and the early action on Saturday will be streamed on SEC Network+. The most loaded portion of Saturday’s events from 5-9 p.m. CT will air live on the SEC Network. Links for all three days can be viewed below.

LSU officially gets the meet underway on Thursday at 2:15 p.m. CT as Jake Norris competes in the hammer throw. Norris has scored in this event for the Tigers in all three years he’s contested it, including a runner-up finish in 2021. Thursday and Friday’s action on the track will mostly be qualifying as athletes have intentions on making it to Saturday’s finals.

LSU At The SEC Outdoor Championships

The LSU women come in to the meet with lots of depth and firepower and will have a say in the final standings for sure. The U.S. Track & Field and Cross Country Coaches Association Ratings Index labels the Tigers as the favorites to win the SEC meet over Florida and Kentucky, but those are just projections based off performances this season. LSU has a chance though, and it’ll take a full team effort to come out on top.

Nobody will be more important to the Tigers’ title chances than Favour Ofili aka Star Girl. The collegiate record holder in the 200 meters, Ofili will be quite busy with a possible six races over a three day span. She’ll have to run the preliminary heats of both the 200 meters (Thursday night) and 100 meters (Friday night) before a potential four event day on Saturday.

The eyes of not only collegiate track and field, but world athletics, will be on a certain race at 7:25 p.m. CT Saturday evening. It’ll be Ofili versus Kentucky’s Abby Steiner in the 200 meter dash. Why so much hype and interest? Well Ofili is the collegiate record holder with a 21.96 from a few weeks ago and Steiner is the fourth fastest in collegiate history at 22.05. But it’s not even just that, these two women rank No. 2 and No. 4 in the world this year, respectively. These two women are legitimate contenders to medal at the World Championships later this summer, so that’s why there’s so much buzz around that race at 7:25 p.m. CT.

While we’re at it, we might as well talk about the showdown between these two in the 100 meters; that’ll be at 6:25 p.m. CT Saturday night. Steiner (10.92) and Ofili (10.93) rank No. 4 and No. 5 in the world this year in the event; Steiner has gotten the better of Ofili this year, but that’s why you run the races. It’s about competition, and these two athletes have nothing but respect for one another. The world of track and field will be paying attention on Saturday for sure.

Nearly just as important for LSU’s team title hopes will be star distance runner Katy-Ann McDonald. She’s entered in the 800 meter run and 1,500 meter run, both events in which she ranks No. 1 in the SEC. McDonald, just like Ofili, will be a busy bee. She’ll run the 800 prelims Thursday night and then the 1,500 meter prelims on Friday night. On Saturday, the two races are an hour and 25 minutes apart with the 1,500 meters coming first. The thing that bodes well for McDonald is that she set both her lifetime bests in a two-day span at the Bryan Clay Invitational. Her PR of 2:00.98 in the 800 meters not only ranks No. 1 in the SEC, but is also the fastest in the nation this year, and she has a career best of 4:13.07 in the 1,500 meters.

Alia Armstrong (100m hurdles) and Lisa Gunnarsson (pole vault) will also enter the meet as the favorites, and LSU will almost definitely need 10 points from each of them. Armstrong has the fastest time in the SEC and NCAA this year with a wind-aided time of 12.33 seconds; her main competition will be Grace Stark of Florida. The two have split a pair of head-to-head races this outdoor season. Gunnarsson is the heavy favorite to win the pole vault contest as her lifetime best clearance of 15’ 3” (4.65 meters) earlier this season is the best vault in the SEC by more than nine inches. She has never won an SEC outdoor title in the pole vault, only indoors in 2020. Armstrong will also be entered in the 200 meter dash, an event that could boost LSU’s title hopes.

Amber Hart, LSU’s only woman thrower, is projected to score in two events and she could accomplish something that’s never been done at LSU. Her points will be crucial, but she enters the meet poised and composed to make an impact. Her career best heave of 180’ 3” (54.95 meters) in the discus ranks as the No. 2 mark in the SEC this year; it’s only nine inches off Divine Oladipo’s SEC lead. Hart also ranks seventh in the conference in the shot put with a career best of 53’ 1” (16.18 meters).

LSU’s distance corps will be in contention for some more big points in the 800 meters and 1,500 meters. Stud freshman Michaela Rose will enter the meet with the fourth fastest time in the league in the 800 meters, a 2:02.74 from mid-April. Lorena Rangel will be doing the 800/1,500 double just like McDonald and she’s coming off a PR of 2:04.74 just two weeks back in the 800. Points from Rangel would go a long ways for the Tigers.

Let’s swing over to the jumps for a moment. Big point swings could occur here. LSU has three women – Nyagoa Bayak, Abigail O’Donoghue, Morgan Smalls – in the high jump that are ranked No. 5, No. 6, and No. 6. If you count out those points they are projected to get in the event it would be nine; so any point total nine or higher in the high jump will be deemed as a success for the Tigers.

Smalls will also be in action in the long jump where she ranks sixth in the conference. Serena Bolden will have a chance to add points to the Tigers’ total in both the long jump and triple jump, and senior Kyndal McKnight will be looking to notch points at the SEC meet for the first time in her career. McKnight has had some close calls scoring at the conference meets through the years, but something tells us it’s happening this week in the triple jump.

Garriel White (400 meter hurdles), Amber Anning (400 meters), Alicia Stamey (3,000m steeplechase) and Sara Funderburk (3,000m steeplechase) are not slated to score based off performances this season from around the league. With that being said, they are just outside the top eight of the league rankings and all are more than capable of pitching in points. Those will be some key events to see if LSU can snag some extra points outside of the projections.

LSU has three men that are considered the favorites to win SEC titles in Eric Edwards Jr., Apalos Edwards, and Tzuriel Pedigo. Edwards Jr., the 2022 SEC champion in the 60 meter hurdles, will look to make it a sweep of the hurdle conference titles this year. Pedigo, the 2021 NCAA champion in the javelin, will be looking to win his first SEC title with the stick – his best throw of the season, 253’ 9” (77.34 meters), leads the conference by almost two feet.

Edwards will be contesting the triple jump for the Tigers and his season best wind-aided mark of 53’ 4.50” (16.27 meters) leads the conference. Teammate Sean Dixon-Bodie, the 2022 SEC indoor champion in the event, owns the third best mark in the SEC this year with a mark of 53’ 0.25” (16.16 meters). This event could lead to upwards of 15 points for the Tigers.

Dorian Camel leads the sprints crew into the meet as he will run a possible six races; he’s entered in the 100 meters and 200 meters, and he’ll also run the relays for LSU. He ran a personal best of 20.00 in the 200 meter dash at LSU’s regular season finale to move up to the No. 3 spot in the SEC; he also ranks No. 7 in the 100 meters. LSU will look to advance three men to the finals of the 100 with Da’Marcus Fleming and Godson Oghenebrume competing as well. Fleming’s season best of 10.02, slightly wind aided, is the third best in the league.

Throws wise, John Meyer, Jake Norris, and Eli Gaughan are all well within the zone to rack up points for the Tigers. Meyer’s lifetime best of 67’ 3.25” (20.50 meters) in the shot put, which is also the LSU school record, is the second best this year in the SEC. Gaughan ranks sixth in the javelin with a career best of 229’ 8” (70.00 meters).

The LSU men’s 4×100 meter relay crew will be Godson Oghenebrume, Dorian Camel, Da’Marcus Fleming, and Kenroy Higgins II. LSU ran its season best of 38.85 as the regular season closed out at the LSU Invitational two weeks ago. The men’s 4×400 meter relay ranks fifth in the league with a season best of 3:02.97.

Long jumper Ji’eem Bullock will look to score in his event. He finished eighth at the 2022 SEC indoor meet, so points are forthcoming for the sophomore hopefully. Sean ‘Squirrel’ Burrell, the 2021 NCAA champion in the 400 meter hurdles, ranks as the 12th fastest in the conference this year in the hurdles. He’ll be looking to advance to the finals and then pop off a quality time on Saturday.

How The Conference Meet Works

Postseason means you want finishes in the top eight. Win an event title, earn your team 10 points. After that it goes as such: second (8 pts), third (6 pts), fourth (5 pts), fifth (4 pts), sixth (3 pts), seventh (2 pts), and eighth (1 pt). What point total does it take to win? That’s a great question that no one has an exact answer to, but you can almost be assured you have to be in the triple digits. The last two titles on the women’s side have been won with point totals of 139.5 and 127.