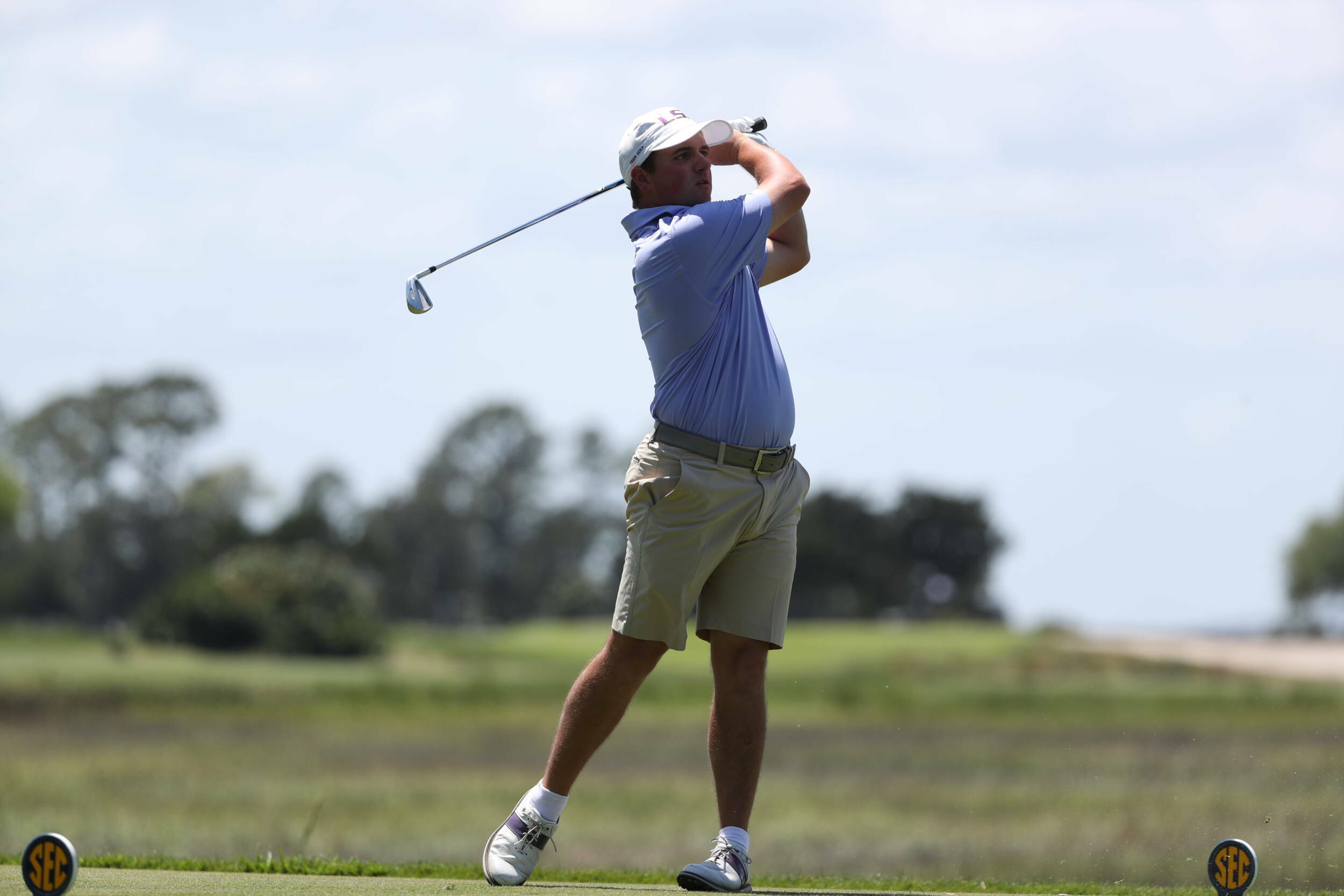 St. Simons Island, Ga. – The No. 4-seeded LSU men’s golf team opened the day with a 3.5-1.5 win over the No. 5 seed Missouri Tigers in the quarterfinal round of the SEC Championship before falling to the top seeded Vanderbilt Commodores by a score of 3-2 on Saturday afternoon at the Sea Island Golf Club.

Quarterfinal – Vs. Missouri
The Battle of the Tigers teed off from hole No. 10 at 7:30 a.m. local time to start the day. Nicholas Arcement grabbed the first point of the day for LSU as he finished 2&1 over Tommy Boone. Arcement took an early two-hole lead after 7 holes of play but Boone grabbed the next two holes to enter the front nine tied. Boone won the second hole and held the lead into the fourth but was usurped by Arcement as he won the next three holes and held on claim the point.

Garett Barber made it 2-0 on the day after defeating Jack Parker at 1 Up. Barber never fell behind in the match and held a lead for 11 of the 18 holes played. After Parker tied the match on the 16th hole of play, Barber claimed the next hole with a birdie to take the lead and held his nerve with a par on the final hole to claim victory.

Missouri grabbed their lone point of the day from Jack Lundin, who defeated Drew Doyle in 20 holes of play. Doyle held the lead for most of the match before Lundin tied it up with three holes left of play and claimed the next to take a lead. Doyle won the 9th hole and forced the match to go to sudden death, where the two split the 19th hole before Lundin won on the 20th hole of play.

Cohen Trolio secured the win for LSU after 21 holes of play against Charlie Crockett. Crockett held control of the match for much of the match, leading on 12 of the 18 regulation holes. Trolio tied it up on the 7th hole and the two couldn’t be separated before heading into sudden death holes. The 19th and 20th holes were split before Trolio claimed the final hole and secured LSU’s spot in the semifinal round for the first time since 2018.

Michael Sanders was the other Tiger in action as his match went unfinished against Yu-Ta Tsai. Tsai held the lead on 12 of the opening 13 holes before Sanders tied it up on the 14th hole. Neither player was able to pull ahead after that, and the match was called after the 19th hole once LSU clinched the victory.

Semifinal – Vs. Vanderbilt
The Tigers faced the No. 1-seeded Vanderbilt Commodores less than an hour after clinching the quarterfinal win with the opening pair teeing off from hole No. 1 at 1:30 p.m. local time. Arcement grabbed his second win of the day as he defeated William Moll, 3&2. Moll took an early lead after the third hole but was never able to break away from Arcement and the two entered the back nine holes all even. Arcement claimed the 10th hole with a par to take a 1UP advantage before grabbing a birdie on No. 12 and a par on No. 14 to extend his lead to three and coast on the final two holes and give LSU the first point of the match.

Vanderbilt tied it up at 1-1 in the match as Gordon Sargent defeated Barber by a 4&2 margin. Sargent took an early lead after the second hole and push the difference as far as five after 10 holes of play before Barber cut the margin down to two with wins at the No. 11, 12, and 14 hole. Sargent recovered and won back-to-back holes on No. 15 and 16 to claim victory and score Vanderbilt’s first point in the round.

Trolio pushed LSU back into the lead as he took down Harrison Ott by a margin of 2&1. Ott took an early lead after getting a birdie on the second hole but only held his lead for four holes before Trolio tied it up with a par on No. 6. The two players split the next three holes and entered the back nine tied, where Trolio took his first lead of the match with a birdie at No. 10. The freshman showed his skill as won holes 13 and 14 to stretch his lead to as high as three before holding off a late charge from Ott to clinch the win on No. 17 and give LSU a 2-1 lead in the match.

Vanderbilt tied it up moments later as Cole Sherwood defeated Doyle, 3&2. Sherwood and Doyle both held the lead at points on the front nine before entering the back nine tied up. Sherwood took control after grabbing birdies at No. 12 and 13 and chipping in a shot from off the green on No. 15 and rode momentum to match victory.

Reid Davenport clinched a spot in the finals for Vanderbilt as he defeated Sanders by a score of 4&3. Davenport took a one-hole lead after the fourth hole, but Sanders responded by winning the next and tying their match back up. Davenport won the next three holes and did not lose his lead the rest of the way as he went on to win the 14th hole and clinch the win with a par on the 15th.

Up Next
The Tigers will discover their postseason path when the NCAA selection show for the 2022 NCAA Men’s Golf Tournament airs at 3 p.m. CT on the Golf Channel on Wednesday, May 4th.