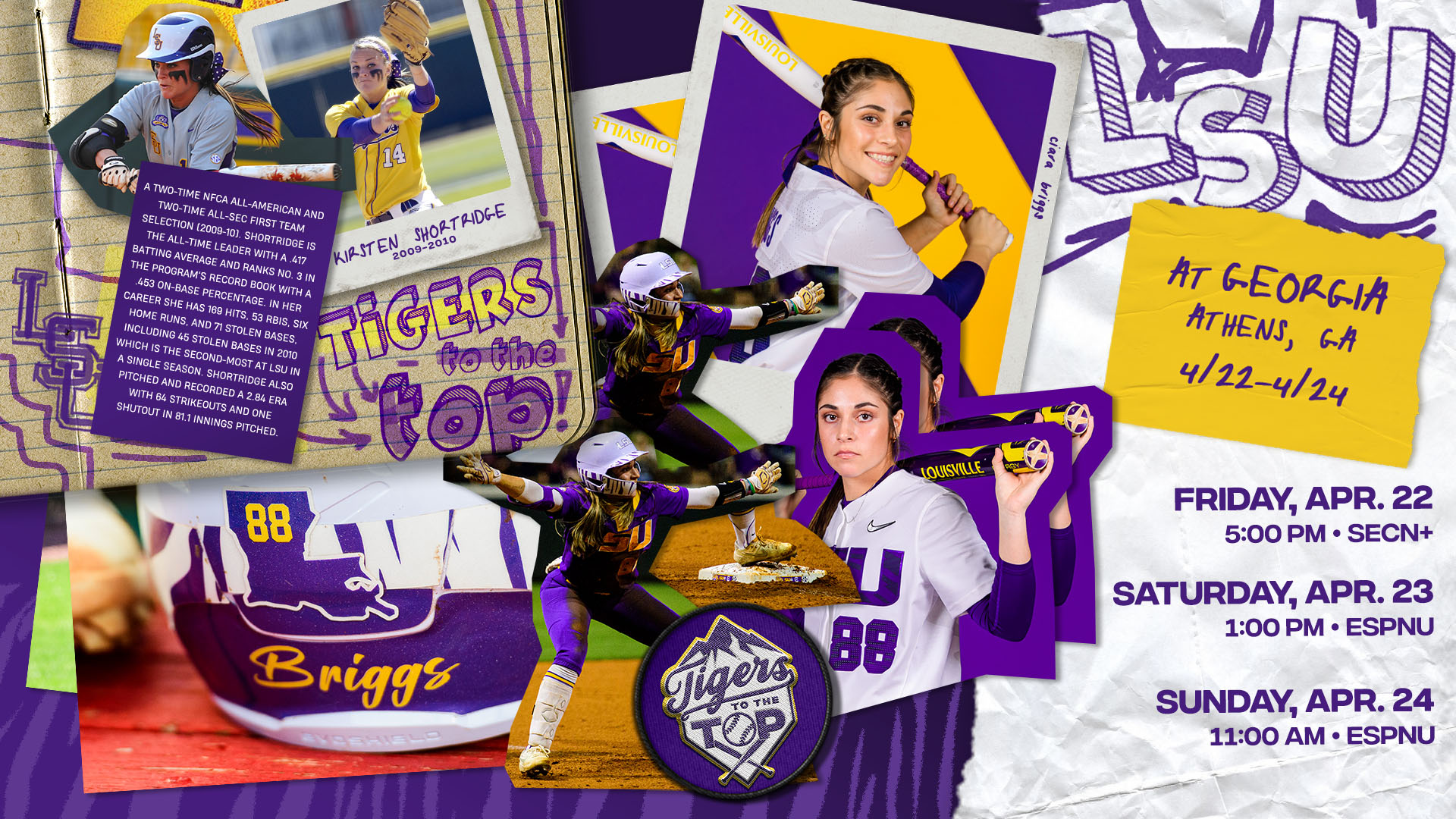 The three-game series will begin at 5 p.m. CT on Friday, April 22 and will be streamed on SECN+. The series will continue at 1 p.m. CT Saturday and conclude Sunday with an 11 a.m. CT game time. Both games on Saturday and Sunday will be televised on ESPNU with Courtney Lyle and Danielle Lawrie on the call. Patrick Wright will call all three games on the LSU Sports Radio Network, 107.3 FM in the Baton Rouge area.

LSU is coming off a 7-1 victory at McNeese State Tuesday night, following a three-game sweep over South Carolina last weekend at Tiger Park.

As a unit, the Tigers have a .294 batting average with 334 hits, including a SEC best 75 doubles that also ranks No. 5 in the NCAA. LSU has 238 RBIs and 46 home runs this season. Defensively, the Tigers have the fourth lowest ERA in the conference at 2.65 behind 240 strikeouts.

Sophomore Danieca Coffey leads the Tigers with a .387 batting average, followed by sophomore Ciara Briggs who is hitting .385 this season. Both have 55 hits (No. 3 in SEC, No. 18 in NCAA), while Briggs leads the team with 42 runs scored. Sophomore Taylor Pleasants is coming off a three-hit, two home run game that boosted her average to .331 this season. Pleasants now leads the team with 21 extra-base hits, including a team-high 11 doubles. Senior Shelbi Sunseri (.276) leads LSU with 13 home runs, a mark tied with Pleasants (2021) at No. 9 in the program’s record book for the most homers in a single season. Sunseri ranks No. 3 all-time with 46 career home runs. Junior Georgia Clark (.267) rounds out the top of the lineup for LSU and has 11 home runs and 47 RBIs. Clark’s RBI mark ranks No. 3 in the SEC and No. 11 in the country.

Kilponen is 14-4 in the circle and has a 2.17 ERA with 107 strikeouts in 112.2 innings pitched. Kilponen is coming off her fifth shutout of the season and 10th in her career. Sunseri is 6-6 with a 2.73 ERA and 52 strikeouts, and freshman Raelin Chaffin is 6-2 this season on the rubber, has a 2.94 ERA, 45 strikeouts, walked nine batters, has two complete games and one shutout in 12 appearances and 52.1 innings pitched this season.

LSU is 41-25 in the all-time series against Georgia and are currently on a seven-game winning streak. The last time the two clubs met was in 2019 when the Tigers swept the Bulldogs in a three-game series.

LSU will return to Tiger Park for four consecutive games, beginning with a 6 p.m. game on Tuesday April 26 against McNeese (SEC Network) prior to the final three-game home series of the regular season against Florida April 29- May 1.