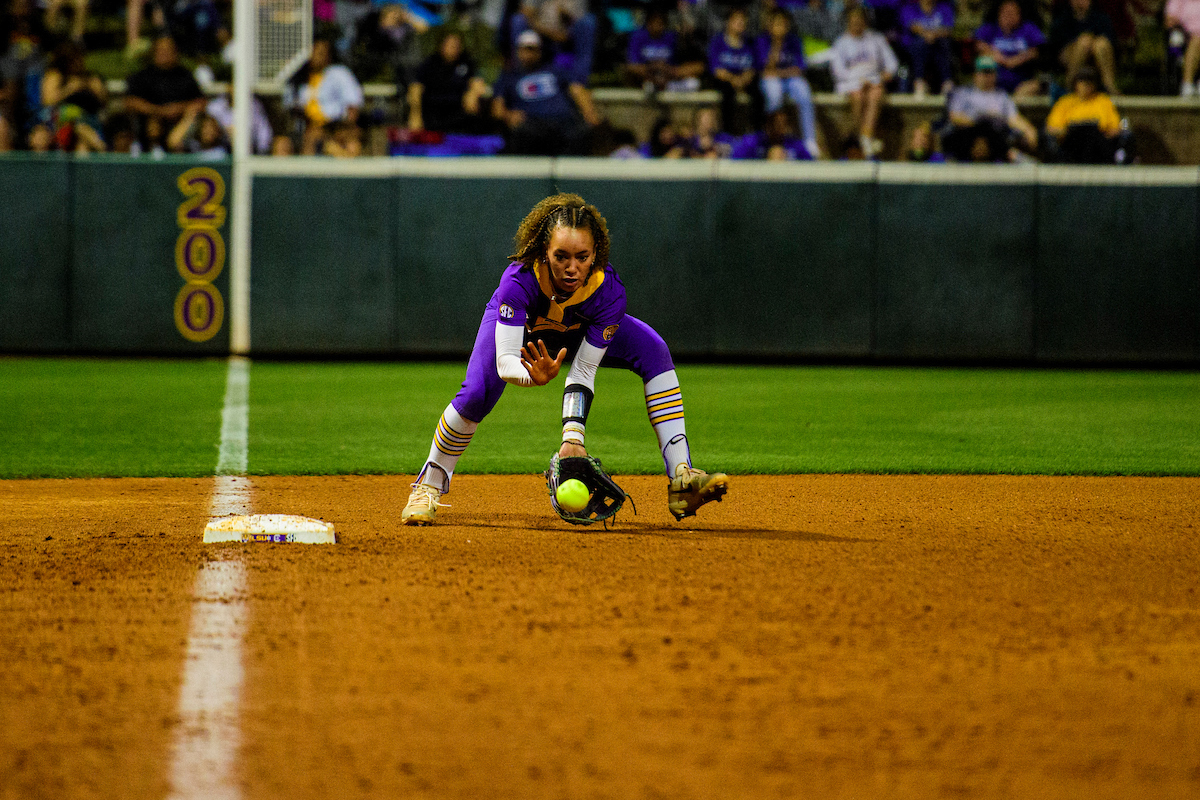 LSU Softball has been loaded with talent over the last half-decade, producing 16 All-Americans since 2015. The only downside of such star-studded rosters is having to replace them once their eligibility expires.

After last season, the biggest cleats to fill came in the form of All-American lead-off hitter Aliyah Andrews and five-year starter Amanda Doyle. Both rank in the top seven of all-time games played at LSU, but head coach Beth Torina’s 2022 lineup card would have to include a new third baseman and a new lead-off hitter.

Sophomore Danieca Coffey has filled both roles, becoming a breakout star for the nationally-ranked Tigers.

The Richwood, Texas native was a first-team All-American at Angleton High School and was recruited as a multi-positional infielder, mostly playing second base in the 2021 season with Doyle at third.

“In our exit meeting after last season, coach laughed and told me, ‘You don’t have to practice at second anymore,’” Coffey said. The hot corner was available, and Coffey was ready to make it hers.

Playing a new position, especially one that requires lightning-speed reflexes and decision-making, is sure to have a learning curve. But she credits her improvement defensively to her mindset, which has been aided by Doyle, who transitioned from the position to student assistant coach this season.

“She always talks to me about confidence,” Coffey said of Doyle, who is pursuing a master’s degree in curriculum and instruction. “At this point of the season, I think the mental aspect is more important than anything else, so we talk about my mental approach and how I can approach things better.”

Having All-American shortstop Taylor Pleasants to her left does not hurt, either.

“You are always confident in Taylor, and you know she has your back,” says Coffey. “Even if I could not get to a ball, I know Taylor will still get to it.”

Despite the lack of prior experience at third, Coffey says she likes it more than second, because with so little time to think, she can rely on her instincts to make plays – instincts she showcased in a highlight-worthy double play versus Central Arkansas earlier in the season.

A double play to bring the Tigers to the plate💪#TigersToTheTop pic.twitter.com/2toIaoewVq

For all her defensive growth, it has been her offense at the top of the Tigers’ lineup that has been one of the biggest revelations this season. Her 55 hits are T-3rd in the conference, and she is one of 13 players in the SEC with three or more triples. While sluggers like Georgia Clark, Shelbi Sunseri, and Pleasants are garnering attention with their power, Coffey has quietly been the most consistent hitter this season, using a simple approach at the plate that keeps her within herself.

“I just try to do my job as a leadoff and get on base as much as possible because I’m not the home run hitter like everybody else,” says Coffey, who indeed does get on base as much as possible. Her .467 on-base percentage leads the team, as does her batting average. “I always tell myself; no one is going to beat me twice. You might beat me the first time, or you might beat me the second time, but you are not going to get me out both times.”

CLUTCH!
Leadoff double from @DaniecaCofffey to start the inning.

Her self-assurance at the plate has yielded incredible results. Coffey enjoyed a 14-game hitting streak throughout most of February, and since taking over lead-off duties in game five of the season, she has reached base in 37 of 40 games.

As the competition rises, so does her level of performance. Through LSU’s first 15 conference games, she has hit .375 with a .492 on-base percentage, drawing 12 walks and driving home eight runs. The Tigers have already played three conference series against top ten teams, including winning two out of three versus No. 2 Alabama. But playing one of the nation’s toughest schedules early in the season was the perfect kickstart to her season.

Coffey felt a shift in her confidence after the second weekend of the season when LSU traveled to Clearwater, Fla. She reached base nine times that weekend, and the Tigers collected victories against then-No. 7 Oklahoma State and Texas Tech.

In only her second season, Coffey, along with several of her underclass teammates, is just beginning to catch her rhythm in what looks to be a bright future for the Fighting Tigers. LSU will undoubtedly continue to lean on Coffey’s leadership at the top of the lineup and at the hot corner, but she wants to be most known for her positive energy and being a good teammate.

“Just being joyful, and knowing I gave my all every single game,” she said of what she wants her impact to be. “No matter the outcome, I’m still a kid, so I try to keep a smile on my face.”