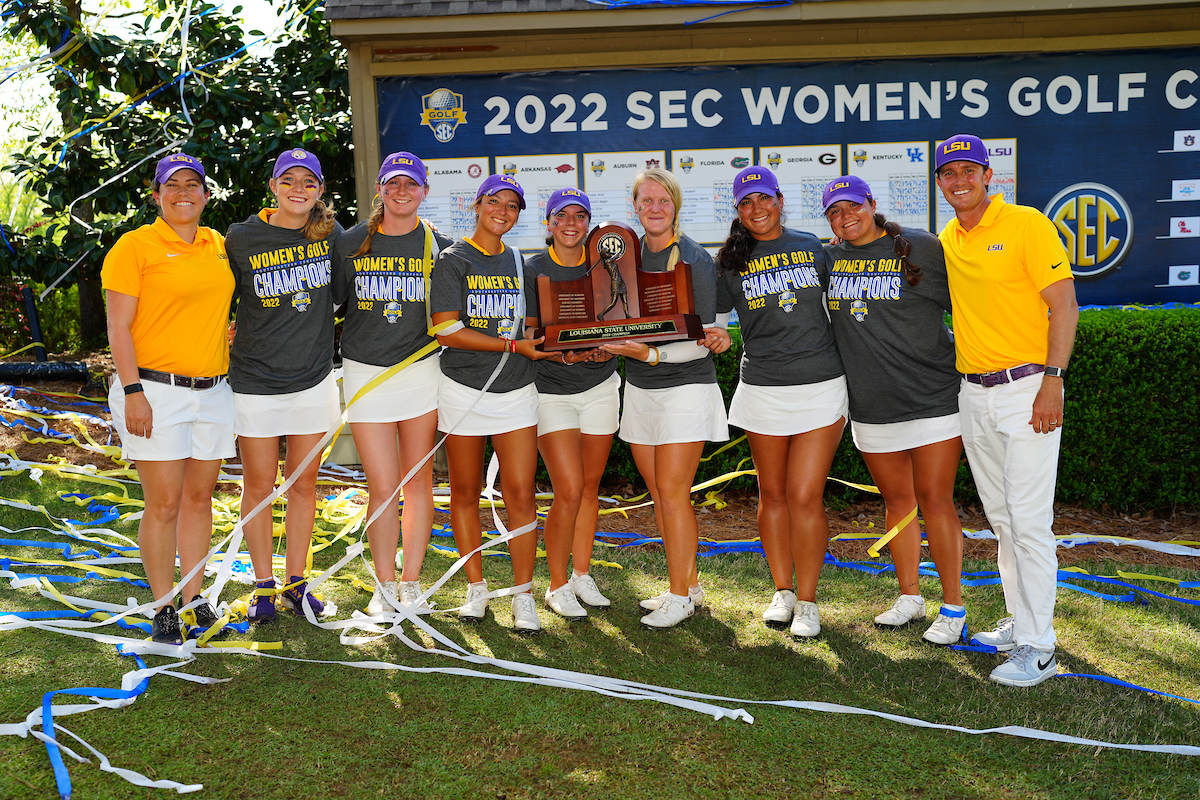 BIRMINGHAM, Alabama – It seemed like it was meant to be.

The work. The long hours on the course. The patience to withstand another rain delay two hours into the championship match. It all was there for LSU when junior Latanna Stone made a short put on 18 to win the hole, win her match 2UP and clinch the 2022 Southeastern Conference Women’s Golf Championship for LSU.

Sunday afternoon at the Greystone Country Club’s Legacy Club, Coach Garrett Runion and assistant Alexis Rather and players Stone, Ingrid Lindblad, Carla Tejedo, Elsa Svensson and Jess Bailey along with alternate Presley Baggett made sure this time another SEC Championship trophy was making the six-hour sprinter van journey back to Baton Rouge.

It was sweet revenge for LSU after the 2021 championships when the Tigers shot a national record low score in qualifying and then lost in the semifinals.

LSU won the match, 4-1, with three match wins to clinch the title and two matches that were tied at the end of the competition. The teams again had some weather issues as the match was suspended some 2:17 into play for just over two hours before play resumed shortly after noon.

The break came just after Lindblad in the third match had birdied the seventh hole to take a 2UP lead over Annabell Fuller. When play resumed Lindblad won the par 3 eighth with a par, the par 4 ninth with a par and the par 4 10th hole with a birdie en route to an easy 6&5 win that ended the match on Hole 13.

“We’ve been talking about hitting fairways, hitting the greens, putting pressure on your opponent and trying to make birdies,” the native of Halmstad, Sweden, who on Friday started the trophy haul by winning LSU’s first individual title in 31 years, told the SEC Network. “I feel like I hit the fairways, hit the greens today. The holes where we came back, I made putts from seven or eight feet and that felt good.”

With Tejedo in the lead from the seventh hole when she birdied to a 4&2 triumph over Marina Escobar that made her 3-0-0 on the weekend in match play, attention turned to three matches with Svensson, Stone and Bailey.

Svensson’s match with Carla Mazalini was close throughout with several ties before Mazalini took the lead on 13th. The freshman was able to get it back even on the 17th and the pair halved the 18 to force extra holes which were not completed.

Bailey and Jackie Lucena as the last match that it might be the decided but that match ended as a tie after Lucena evened the match with a birdie on 17.

The clinching match swung Stone’s way after falling 1DOWN on the par 5 11th hole. It remained that way until the 14th when Stone’s par evened the match with Maisie Fuller. The lead that gave LSU the championship came on the par 3 17th hole when the Riverview, Florida native made an 18-foot birdie putt to take a 1UP lead. Stone’s approach on 18 was in tight and her putt dropping in the hole started a celebration of purple and gold on the 18th green.

“I had some sort of idea but I was just trying to remain calm,” Stone said of what her birdie potentially meant for LSU. “But Garrett always says ‘act like your point matters and your point is going to count.’ So, I was just trying to stick in and have the finish that I had (Saturday). I pulled through with that which was nice. I took some relief off Elsa and Jessie.”

“Latanna absolutely stepped up when she needed to,” said Runion. “The last two matches were sensational at the end. She birdied the last three holes. I didn’t get to see it, but that it huge. That’s what you need from one of your best players. She stepped up when it was needed. That’s why she is a Curtis Cup member, a Palmer Cup member, an all-American, that’s what they do.”

“To have Ingrid just come out of the rain delay and have full control was huge because it allowed Alexis and I to focus on the other people in the tighter matches and that’s what we did,” said Runion. “Alexis did an excellent job hanging back with Jess and Latanna, I was kind of up front with Carla and Elsa. The start of the day was a dream start as well. But when you have a rain delay you get a little nervous. But they responded and kept their foot on the gas pedal and now they are SEC champs.”

Now LSU waits for the regional selection that is expected on April 27 with the Tigers as the automatic qualifier from a stacked women’s golf league.

LSU 4, FLORIDA 1
(Tied matches are half a point for each team)

LSU’s PATH TO THE SEC CHAMPIONSHIP