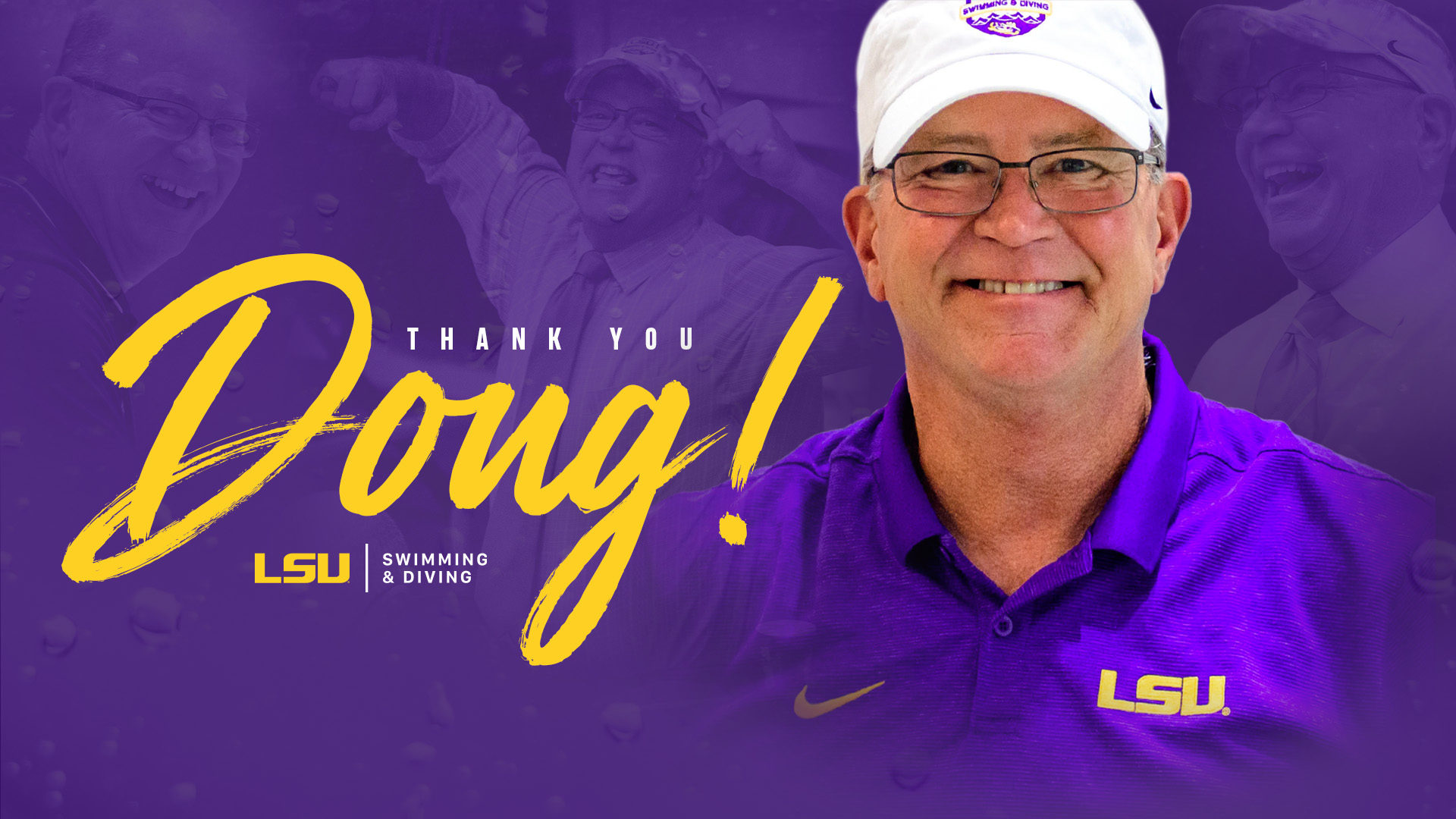 BATON ROUGE, La. – Doug Shaffer, who has been at the helm of the LSU diving program for the last 20 seasons, is retiring from his position as the head diving coach, he announced Thursday.

“I am so grateful to have had the opportunity to serve as LSU’s diving coach,” Shaffer said. “I have been blessed to work with remarkable and talented student-athletes, and I’m humbled by the results and growth that has unfolded from the fruits of their labor and belief in themselves.”

“My time at LSU has been an incredibly rewarding and enriching experience.  I can’t begin to put into words the appreciation I have for the support of the administration, staff, fellow coaches, and the student-athletes who make up the LSU family. These relationships will last a lifetime. But with 51 years in the sport and 27 as a collegiate coach, it’s time to pass the torch. Moving forward I have a healthy to-do list which first and foremost will focus on my family while continuing to support LSU Athletics in any way I can. Geaux Tigers!”

“In two decades of service to the LSU community, Doug has elevated not just our diving team, but our entire athletics program,” Director of Athletics Scott Woodward said. “Through his work as a coach, he has helped so many Tigers develop to their full potential as athletes. Through his work as a leader and a mentor, he has transformed the lives of countless student-athletes, offering each of them a platform for success long after the completion of their collegiate careers. We are grateful for the impact he has made and the example he has set throughout his time here, and we wish him all the best in this next chapter of his life.”

Shaffer has been at forefront of leading the LSU diving program to new heights year in and year out. From SEC Champions to Olympians, he has developed some of the most accomplished athletes in the country and the conference throughout his tenure in Baton Rouge, building and sustaining a program of consistent achievement. In his final season, Shaffer earned SEC Women’s Diving Coach of the Year honors and coached six divers to the 2022 NCAA Championships held in Atlanta, Ga., at the McAuley Aquatic Center.

Juan Celaya-Hernandez, the most decorated diver in LSU history under Shaffer, left Atlanta with two bronze finishes in both springboard events. Celaya-Hernandez closed out his career as a seven-time SEC champion with three school records and two SEC records to his name.

In the 2022 postseason, Shaffer also led the Tigers to 14 total qualifications between the women and the men, with the women bringing four divers to nationals and the men bringing two divers.

Shaffer has shown his prowess in coaching LSU athletes to the Olympic games, making the 2020 Tokyo experience no different. Celaya-Hernandez, a representative of Mexico, and Norway representative Anne Tuxen added a tinge of purple and gold to the diving discipline after qualifying for the summer games.

Celaya-Hernandez competed in the three-meter synchronized diving event and finished fourth, narrowly missing out on the bronze medal. Tuxen placed 28th on platform, jumping as high to the 25th spot. LSU only sent one diver to the Olympic games prior to Shaffer’s arrival in 2002, while he has sent three in the last two editions (2016, 2020).

This season was the third time Shaffer has been honored for his coaching efforts. On the men’s side, he was named the 2017 SEC Coach of the Year after the program qualified a program-record four male divers for the NCAA Championships. Andrew Suchla and Juan Celaya-Hernandez, along with women’s diver Lizzie Cui, earned All-American honors for their performances in Indianapolis.

Celaya-Hernandez shattered all three LSU records in the same season, which led to his nomination and win as the 2017 SEC Male Freshman Diver of the Year.

Shaffer also earned the SEC Women’s Diving Coach of the Year award in 2008. That season, he coached Rachel Ware to her third All-American accolade in two years with a 12th-place finish in the one-meter springboard at the NCAA Championships. His athletes also had a superb showing at SEC’s as a conference-high four LSU divers received medals for placing in the top three of their respective events.

Ware and fellow diver Paige Brown had two of the best competitions in their careers at the 2008 SEC meet with both departing Tuscaloosa as conference champions. Ware won the one-meter championship and captured the runner-up spot in the three-meter en route to an SEC Female Diver of the Year honor. Brown beat out 20 other competitors to take the platform title with a score of 300.30, which was a school record at the time.

Both were also named to the All-SEC first team, the first time a female LSU athlete on the swimming and diving squad had received such recognition since 2003.

Before his coaching career, Shaffer was a world-class diver, graduating from UCLA in 1986 with two NCAA titles and a B.A. degree in history. He was an 11-time U.S. National Champion, the 1986 NCAA Diver of the Year and the NCAA one-meter and three-meter champion in 1986 for the Bruins.

He is one of the few divers to defeat the legendary Greg Louganis. Shaffer ousted the four-time Olympian five times in 1987, three of which were in U.S. National competition.

Shaffer is a native of Canton, Ohio, and is married to Dr. Tracy Stephenson Shaffer, an LSU professor and chair of the communication studies department. The couple has a daughter, Sara Melissa.