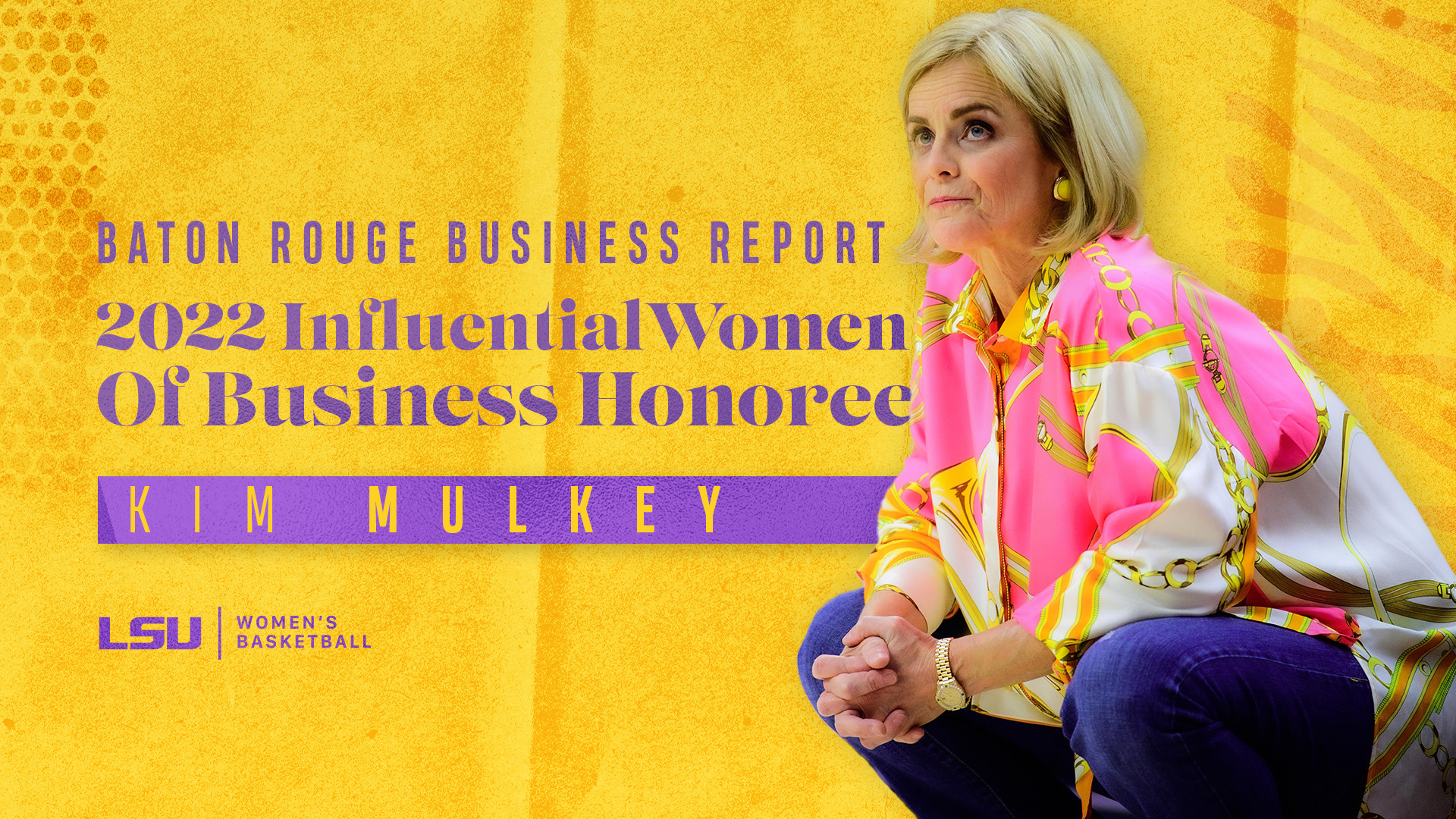 BATON ROUGE – LSU Women’s Basketball Coach Kim Mulkey was named to this year’s class of Influential Women in Business by the Baton Rouge Business Report after leading the Tigers to a 26-6 record in her first season as the head coach.

Coach Mulkey was named the AP National Coach of the Year one week ago after leading the greatest turnaround by a first-year head coach in SEC history. She became one of three coaches to win the award for a third time.

It has been nearly one year since Coach Mulkey came home to Louisiana to lead the Tigers. She took over a team that finished the previous season with a 9-13 record.

“Be patient – understand it will not happen overnight,” Coach Mulkey said on April 26, 2021, at her introductory press conference.

The Tigers went 26-6 during her first season, winning their most games since the 2007-08 season. They finished No. 2 in the SEC and were ranked No. 9 in the final AP Poll of the season. LSU was 6-1 against ranked opponents in Coach Mulkey’s debut season and the Tigers hosted March Madness games as a No. 3 seed in the NCAA Tournament, winning their first NCAA Tournament game since 2014.

“One of my most enjoyable years ever in my career,” Coach Mulkey, who is the only person in men’s or women’s college basketball history with national championships as a player, assistant coach and head coach, said after LSU’s second round loss to Ohio State. “I personally judge good coaches based on the talent they have on that floor and are they overachieving. Did we beat some people this year we should not have beaten? You bet we did. We beat a lot of ’em. We beat ranked teams. We didn’t start this baby ranked. We came from nowhere and just built it.”

When the women’s college basketball season comes to a close on Sunday, LSU will finish ranked No. 1 in the SEC in scoring. The Tigers averaged 73.72 points per game, up from 60.2 points per game a season ago which ranked last in the SEC. The Tigers also jumped from shooting 38.6-percent last season (14th in SEC) to 44.3 percent this season (2nd in SEC).

Coach Mulkey relied on a cast of players that, aside from three, was the same from the previous season’s roster. Khayla Pointer returned for her final season at LSU and had the best year of her career. She averaged career-highs with 19.63 points per game (2nd in SEC), 6.44 rebounds per game (17th in SEC) and 5.25 assists per game (2nd in SEC). Pointer earned First Team All-SEC Honors and was named an All-American (AP and Sports Illustrated Second Team; USBWA Third Team), becoming the 20th All-American Mulkey has coached.

Alexis Morris was a key addition that came to LSU because of Coach Mulkey. After playing for Mulkey her freshman season at Baylor, Morris bounced around to Rutgers and then Texas A&M. When Coach Mulkey was hired at LSU, she entered the transfer portal and reached out to join the Tigers. In her first season in Baton Rouge, Morris electrified the LSU offense. She scored 15.04 points per game and was key to LSU’s success. Morris has announced plans to return to LSU for her final year of eligibility next season.

Jailin Cherry also returned for her final season as a Tigers and, like Pointer, set new career-highs with 9.6 points per game, 5.2 rebounds per game and 2.5 assists per game.

Faustine Aifuwa played her sixth and final season as a Tiger, battling in the paint to score 9.7 points per game and grab 6.8 rebounds per game (14th in SEC). Autumn Newby was a new addition to the roster as an undersized post player from Vanderbilt. Playing her final year of eligibility, Newby played with grit on both ends of the court and grabbed 8.1 rebounds per game (6th in SEC). Hannah Gusters was the other new addition that came from Baylor with Coach Mulkey and had a pivotal role coming off the bench to relieve Aifuwa and Newby in the post.

“This bunch jump-started this program again,” Mulkey said. “It gave everybody an interest, and I’m forever grateful to them. Forever.”

LSU’s success on the hardwood reignited a fan base that was hungry for success in women’s basketball. A new program attendance record was set as 129,008 fans came out to watch the Tigers throughout the season. Averaging 7,167 fans per home game, LSU ranked No. 3 in the SEC in attendance as Mulkey reenergized the LSU fan base that once saw the Tigers go to five consecutive Final Fours.