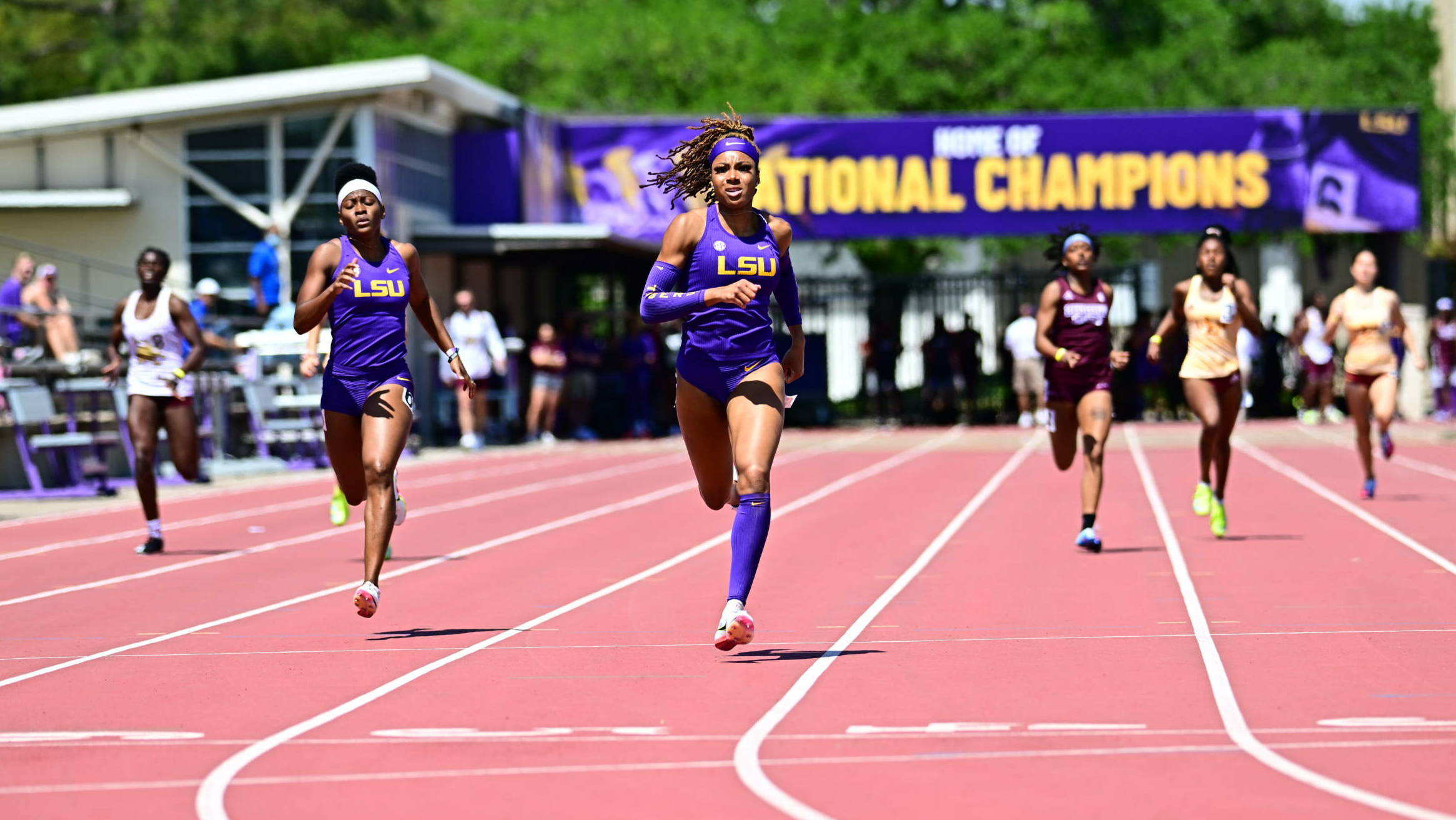 Baton Rouge, La. –  The LSU track and field team claimed seven event titles on Saturday at the Battle On The Bayou that was hosted at Bernie Moore Track Stadium. In addition to those seven wins, LSU athletes registered 10 national top-10 marks as well.

It was a sweep of wins for LSU’s 4×100 meter relays. The women’s crew of Alia Armstrong, Leah Phillips, Tionna Beard-Brown, and Favour Ofili teamed up to claim a winning readout of 42.90. The time was a season best and ranks No. 2 in the NCAA. The men’s quartet of Eric Edwards Jr., Da’Marcus Fleming, Ashton Hicks, and Dorian Camel circled the track in a time of 39.57 to cruise to victory.

Lorena Rangel and Katy-Ann McDonald put on an absolute show in the 1,500 meter run with two of the three fastest times in LSU history in the event. Rangel edged out McDonald at the finish line with a time of 4:17.49, while McDonald finished with a clocking of 4:17.66. Both times were personal bests and ranked inside the top 10 of the NCAA in the seventh and eighth spots. Alicia Stamey finished third in the race with a personal best time of 4:24.99 to help LSU take the top three spots.

Distance runner Gwyneth Hughes was LSU’s final champion of the day with a win in the 3,000 meter run. She ran a personal best time of 10:16.19 for the second win of her collegiate career.

If it wasn’t for some talented LSU alumni competing in the meet, LSU would have had three more wins. Alia Armstrong (200 meters), Favour Ofili (100 meters), and Da’Marcus Fleming (100 meters) all took second place in their respective events as the top collegiate finishers behind professionals. Ofili ran a personal best time of 11.11 seconds in the 100 meter dash to finish second behind Aleia Hobbs (11.06); Ofili’s time is the fourth fastest in the NCAA this year.

Fleming went below the previous meet record in the event with a personal best readout of 20.63 in the 200 meters for his silver; the meet record was previously held by Horatio Williams (20.67/2011). Vernon Norwood won the event in a time of 20.44 seconds. Fleming’s reading of 20.63 puts him No. 8 on the national list this season. Armstrong (22.98) also took second in the 200 meters finishing behind Mikiah Brisco, who won with a clocking of 22.73. It was a big personal best for Armstrong who dipped below the 23 second barrier for the first time in her life and it ranks No. 4 this year in the NCAA.

Garriel White completed a 1-2 finish for the Tigers in the 400 meter dash behind Anning. White ran a career best time of 52.70 to garner silver and rank No. 5 in the NCAA this season. Tionna Beard-Brown had a productive day with personal bests in both the 100 meters (11.36) and 200 meters (23.25); those marks earned her bronze finishes in both races.

Leah Phillips narrowly missed a personal best with a time of 13.49 in the 100 meter hurdles to place third.

LSU stays at home again next week as they host the Joe May Invitational at Bernie Moore Track Stadium on April 9.