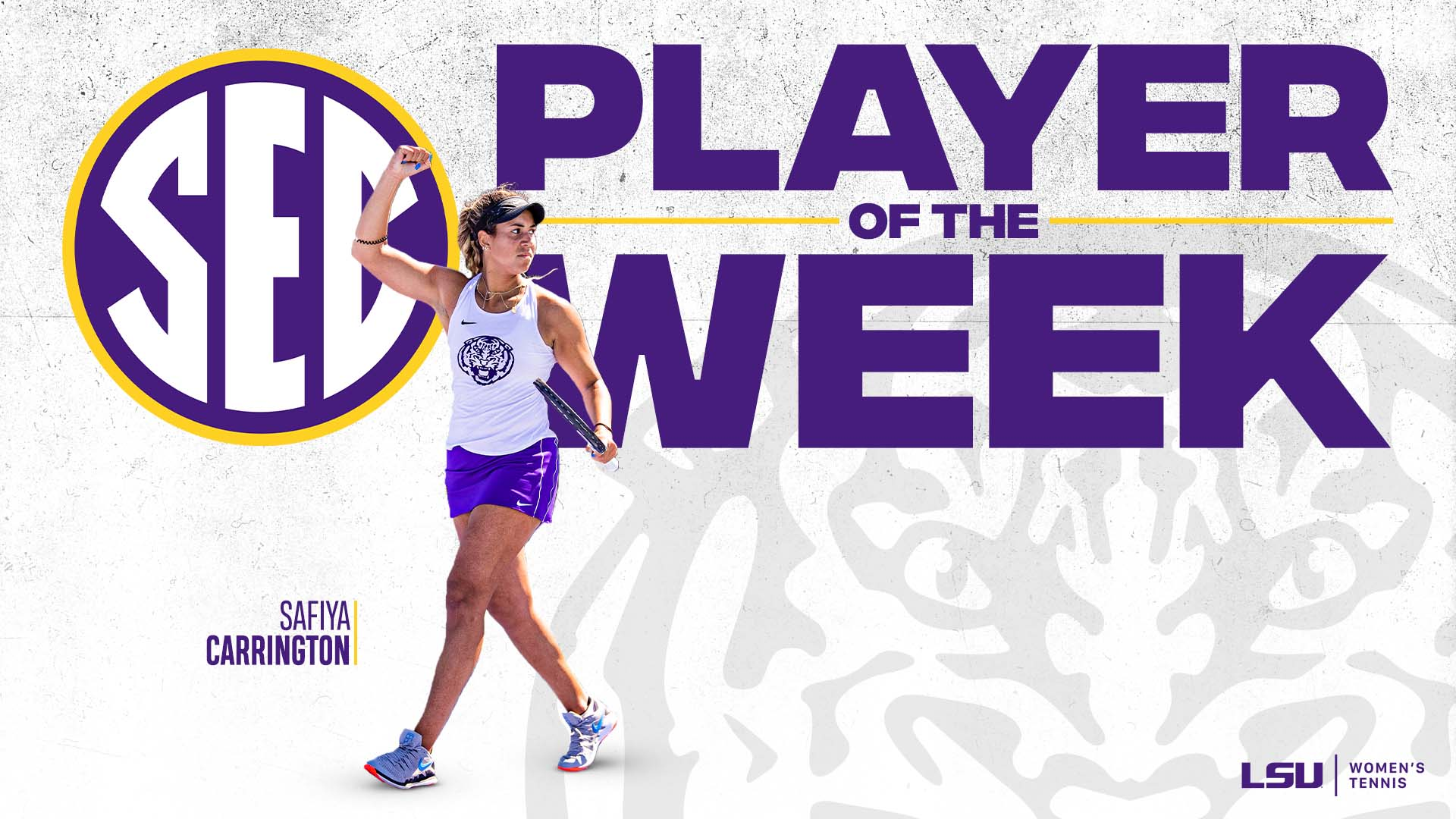 “Extremely well-deserved honor for Safiya,” co-head coach Michael Sell said. “Her strong play in the fall season has transitioned into the spring. They say great players play their best tennis in the biggest moments, and Safiya has stepped up with big wins for the team over the past few weeks and we feel her best tennis is still in front of her.”

Carrington posted a perfect record in both singles and doubles play over the weekend and played a crucial part in LSU securing two wins. Carrington and doubles partner Taylor Bridges set the tone for Friday’s match against No. 54 Kentucky with a dominant 6-1 win over Ellie Eades and Carla Girbau at the No. 2 doubles spot to contribute to the Tigers securing the doubles point. In singles play, Carrington picked up her ninth singles win of the year and second ranked win as she claimed a 6-4, 6-2 straight set win over No. 108 Carlota Molina at the No. 1 spot to grab LSU’s third point of the afternoon in a 4-1 win, the second SEC win of the season and third of the year for the Tigers.

Carrington carried momentum from Friday into Sunday’s match against No. 44 Vanderbilt, where her doubles and singles play were once again key contributions to an LSU victory. Carrington and Bridges secured a 6-4 win at the No. 2 doubles court over the duo of Marcella Cruz and Anessa Lee, which played a huge part in the Tigers grabbing the doubles point and came at a perfect time after the No. 1 doubles court went to the Commodores.

In singles action, Carrington faced No. 46 Anna Ross at the No. 1 singles spot in a three-set match that did not see much separate the two players. The first set went to Ross by a score of 6-4 before Carrington equalized in the second set with a narrow 7-5 win to force a decisive third set. The third set saw the two players trade games back and forth before Ross took a 5-4 lead and faced quadruple match point on the court and in the dual match as the Commodores held a 3-2 lead at the time. Carrington rose to the occasion and grabbed four straight points to tie the set at 5-5 before claiming the final two games with ease to win 7-5. Carrington’s win at the No. 1 spot tied the match at 3-3, and the Tigers claimed the winning point shortly after to secure their third straight SEC win and fourth on the year. For Carrington, it marked her tenth overall singles win of the season, and the third against a ranked foe.

The weekly honor is the first of Carrington’s collegiate career and second honor from the SEC, with the first coming in the form of a spot on the 2021 All-SEC second team.

“I’m thrilled to be recognized,” Carrington said. “It’s a big honor and privilege to be named player of the week in a conference as competitive as this. I’m so proud of our team overcoming the adversity we faced with injuries and match cancelations from earlier in the season. It was great to be able to contribute to two team wins, and we’re excited that we have some momentum in our favor and can’t wait to be back at it.”

Carrington and the Tigers are back in action at 4 p.m. CT on Friday, March 25 as they hit the road to take on No. 7 Georgia.