Tigers Come from Behind to Beat Vanderbilt, 4-3 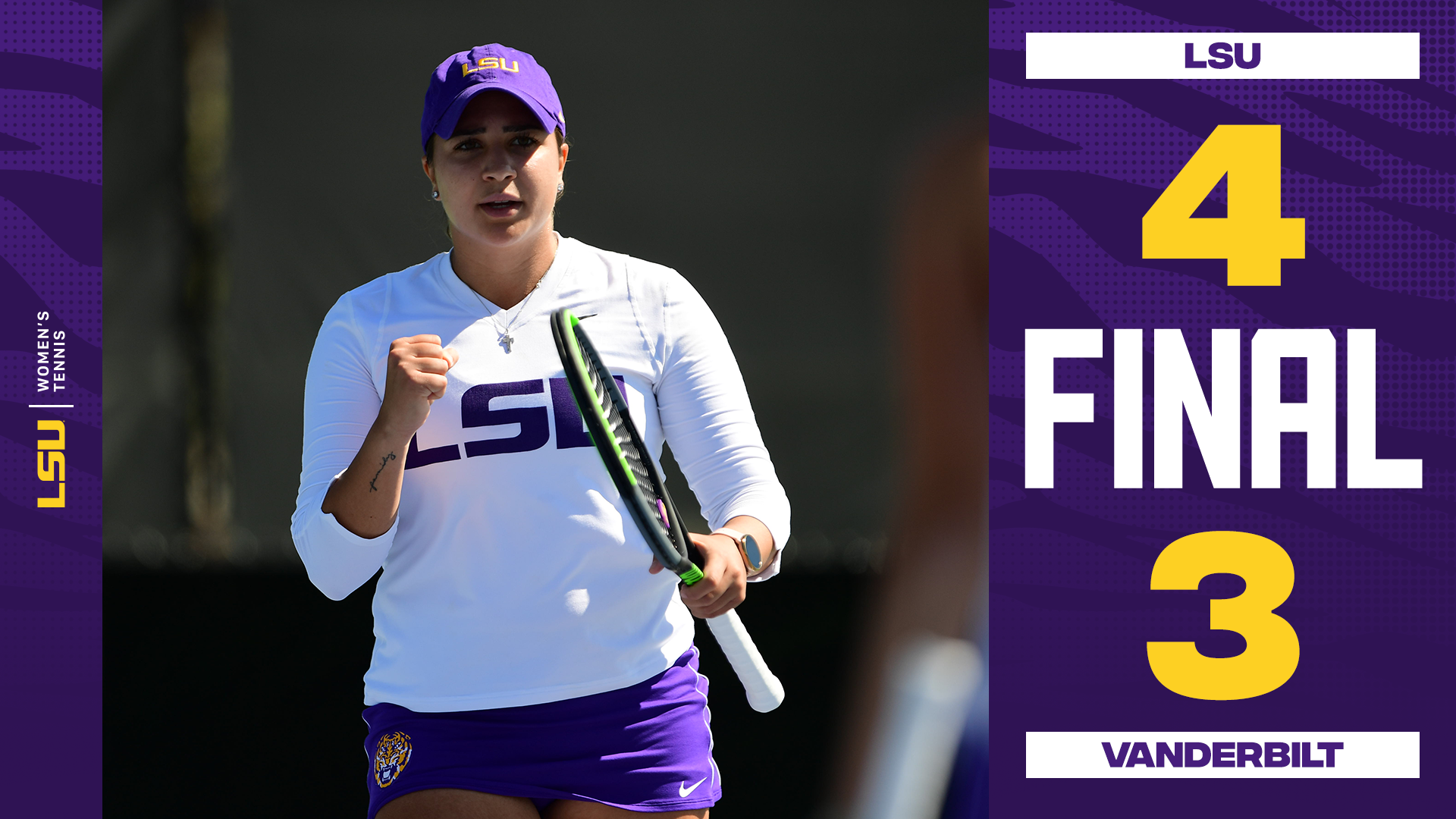 Selling Points
“Another match with tremendous effort and resilience,” co-head coach Michael Sell said. “We felt very confident with the match coming down to Safiya (Carrington) and Ena (Babic). They showed their upperclassmen leadership with their comeback wins to help grab the team win.”

“Being down multiple and consecutive match points in both singles and doubles shows how much determination and belief this team has in each other. We’re happy Mia (Rabinowitz) played as great as she did in singles to earn the win because her work she’s put in every day deserves it. We’ll enjoy this victory and take the momentum into our practice week.”

Doubles Results
The Commodores struck first in doubles play as the No. 78 duo of Yufei Long and Anna Ross defeated Ena Babic and Maggie Cubitt by a score of 6-1 at the No. 1 doubles spot.

Taylor Bridges and Safiya Carrington brought the Tigers back into contention after edging Marcella Cruz and Anessa Lee at the No. 2 by a score of 6-4.

LSU took the doubles point after a narrow win from Nina Geissler and Mia Rabinowitz at the No. 3 over Holly Staff and Amy Stevens. Both duos traded games back and forth until it sat 5-4 in favor of the Commodore duo. The Tiger tandem came up big for their team as they won three straight games to win 7-5 and give LSU a crucial doubles point.

Singles Results
Vanderbilt tied the match at 1-1 after claiming the first singles point of the afternoon at the No. 2 singles spot, where No. 64-ranked Lee defeated Geissler by a score of 6-0, 6-1.

The Tigers took a 2-1 lead on the afternoon as Rabinowitz claimed her fifth singles win of the season with a straight set win over Stevens at the No. 5 spot. Rabinowitz edged her opponent in a close 6-4 first set and followed that with a dominant second set where she maintained control enroute to a 6-2 win.

Vanderbilt took their first lead of the match after Cruz defeated Bridges at the No. 4 spot. Cruz edged Bridges in two very competitive sets that both ended with a 6-4 scoreline to give the Commodores a 3-2 lead.

Carrington completed a come-from-behind victory at the No. 1 spot over No. 46 Ross to tie the match at 3-3. Ross claimed a competitive first set by a score of 6-4 before Carrington equalized with a narrow 7-5 win in the second set and extend the match to a third. The third set saw teams trade games back-and-forth until Ross took a 5-4 lead. Carrington battled back against consecutive match points and claimed the tenth game of the set and won the next two to secure a 7-5 win, her 10th of the season and third against a ranked opponent.

The match was decided at the No. 3, where Babic faced Long. Long came out of the gate with momentum and made quick work to win the first set by a score of 6-1. The second set was much closer, with the two players requiring a tiebreaker to decide it. Babic took an early lead in the tiebreaker and didn’t look back as she won 7-4 to push the match to a third set. The third set saw Babic control the tempo of the match as she went on to win 6-3 to give LSU the vital fourth point of the match. It was Babic’s 9th win of the season, and first in SEC play.